Skip to content
HomeMinder – Gunfight at the O.K. Laundrette 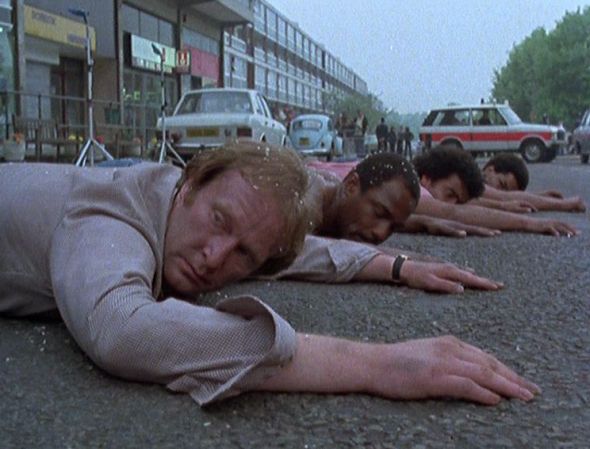 It should have been an easy job for Terry (Dennis Waterman) – a simple case of minding Alfie Cavallo (Dave King) as he collected the money from his string of coin-operated laundrettes.  But a bungled armed robbery, led by Stretch (Trevor Thomas), meant that Terry, Alfie and the unfortunate Mrs Mayhew (Hilary Mason) are taken hostage and a tense stand-off with the police begins.

Richard Marson’s recent book about Verity Lambert describes how she green-lit Minder after listening to a five minute pitch.  Her snap decision paid off as it remained one of ITV’s top-rated dramas for the next fifteen years.  During that time the tone of the series certainly changed, as it became a more comedic, family friendly series – which wasn’t to the liking of everyone (especially Dennis Waterman, who left after the seventh series mainly because he’d felt the show had lost its edge).

Gunfight at the O.K. Laundrette, the first episode (originally broadcast on the 29th of October 1979), retains more of the harder edge of the earlier series, but there’s still plenty of humour mixed in.  It does feel slightly odd though, mainly due to the library music used.  Stock music was often used in Waterman’s (and Euston Films’) previous series, The Sweeney, but it just feels out of place in the early episodes.

The immediate aftermath of the bungled robbery (the shotgun accidentally goes off, wounding Alfie) is probably the weakest part of the episode.  In story terms, it’s important that the police know what’s happened, but the timetable is too contrived.  A shot goes off, a police-car appears from nowhere, an officer sees the hostages being moved to the back room and then calls for reinforcements.  All this seems to take place in a matter of seconds!

Minder was originally planned to be a vehicle for Dennis Waterman and he’s certainly central to this story.  George Cole is much more peripheral, although he’s still highly entertaining.  I love the moment when he breaches the police barrier by the launderette, breezily telling a policeman that he’s with the serious crime squad.  His ability to make money is also readily apparent – he’s able to sell a photo of Terry’s fiance (in fact a girl he’s only spoken to twice) to the newspapers for a tidy sum.

Terry, Alfie and Mrs Mayhew are moved into the back room by Stretch and his two accomplices, Winston (William Vanderpuye) and Cosmo (Leroi Samuels).  Both of them are little more than kids and it’s obvious that they’re in way over their heads.  Stretch is the dangerous one – as it seems likely that he’ll use the gun, Terry slowly begins to chip away at him.

He tells him that attempted armed robbery will get him seven years, but he’ll probably be out within five.  When Stretch asks him how he knows so much, Terry wryly tells him that he used to keep bad company whilst Alfie chips in that he was bad company.  Both Terry and Alfie are old lags, but they’ve done their time and have no wish to go back.

But whilst Terry is earning a (mostly) honest living, it’s one that he admits gives him little job satisfaction – since it consists of  throwing drunks out of strip clubs and providing people with a bit of muscle.  For someone who (as we’ll learn in more depth later on) could have been a contender, it’s something of a come-down.

Leon Griffiths (named after Leon Trotsky by his mother) had been contributing scripts to popular series since the early 1960’s.  The Four Just Men, The Adventures of Robin Hood, Ghost Squad, Out of the Unknown, The Return of the Saint and Hazel were just some of the shows that benefited from his scripting.

But Minder was the first time that he’d devised a show, rather than take on somebody else’s characters and situations.  Although in the end the number of episodes he wrote was fairly small compared to the total number made (15 out of 109) he still set the tone and template for all the writers who followed in his wake.

All the hallmarks of early Minder are contained within this one episode.  Grimy, seedy London (with Terry a regular around the strip-bars of Soho), Arthur’s subtle (and not so subtle) manipulation of Terry and a confrontational relationship with the police.  Terry might be straight now, but he knows that since he’s got a record, he’s a marked man and it’s his uneasy relationship with the law (as well as the conflict between him and Arthur) which would drive the series for a good many years.

2 thoughts on “Minder – Gunfight at the O.K. Laundrette”