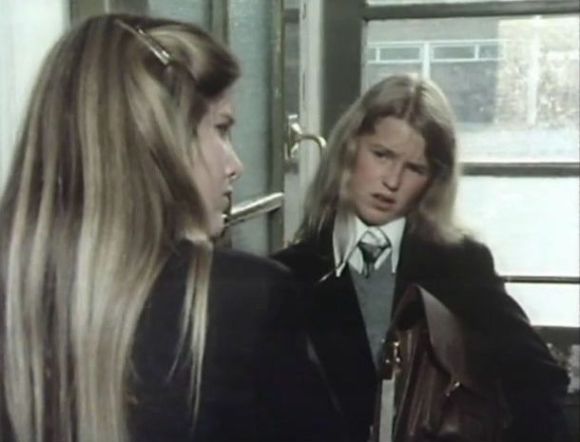 Judy Preston is still deeply unhappy at Grange Hill, bemoaning the fact that nobody ever speaks to her. Although, as her mother points out, she probably needs to put a little more effort into trying to make friends. But the next day it seems as if the first tentative steps towards a friendship are established after Trisha rescues her from the boisterous attentions of Tucker and Benny.

Tucker isn’t best pleased to find himself bested by a girl and offers her a knuckle sandwich – before belatedly remembering that he doesn’t hit girls. Always a charmer, the young Peter Jenkins!

But Trisha isn’t around when Judy finds herself facing the unwelcome attentions of three fifth-form girls, led by the spiteful Jackie Heron (Miriam Mann). All three clearly have a great deal of experience in bullying those younger than themselves and there’s something quite disturbing about these scenes.

Possibly it’s because we’ve seen how isolated and friendless Judy is, so we know that she’ll be totally unable to put up a fight. After rummaging through Judy’s possessions, Jackie spots a rather nice pen. Judy pleads with her not to take it, as it was a present from her late Grandfather. Jackie tells her that she can have it back – if the price is right.

Later, Trisha becomes aware of what’s happened and instantly decides to help. This gives us an early insight into Trisha’s character – she’s always keen to help the underdog and never seems to realise when she’s outnumbered. In this case, two first-years facing off against three fifth-years is clearly an unequal battle, but the prospect of defeat never seems to have entered Trisha’s head.

In the end, Trisha’s sister Carol (Julia Gale) saves the day. Like Jackie, she’s a fifth-former and is able to confront her on equal terms and so forces her to give back the pen. This episode has a clear message at the end as Carol tells the two girls that “people like Jackie Heron never pick on someone who’s able to stand up to them. So if you can’t do it, the answer’s simple – get someone who can. Look, if anything like this happens again, tell someone.”

Short of Carol looking directly down the camera and adding that that goes for everybody else watching at home too, the moral couldn’t have been more clearly stated.