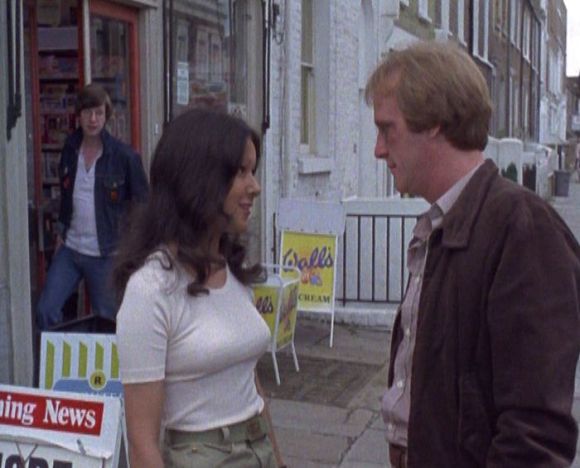 Mr Mukerjee (Saeed Jaffrey) is offered Terry’s assistance to help guard his newsagents shop following a series of attacks.  Initially it seems to be the work of kids, but it quickly becomes obvious that Mukerjee has been less than honest with either Arthur or Terry.

He’s offered his daughter’s hand in marriage to multiple families (collecting a hefty fee each time).  Unfortunately for him, Mr Aslam (Ahmed Khalil) was one of his victims and now he wants his money back.  And Mukerjee’s daughter, Indira (Shireen Anwar), doesn’t want to take part in an arranged marriage – she only has eyes for Kev (Mike Grady).

The Bengal Tiger is a fascinating time capsule of the period.  Partly because of Mukerjee’s newsagents shop, which is piled high with long vanished products.  For example, I spotted copies of the comic Misty on the shelves – this might have been a girls comic, but thanks to its spooky supernatural stories it was one I was happy to read back then!

The other thing that dates the story is, of course, the attitudes and opinions that we see expressed.  Mukerjee, although nicely played by Jaffrey, is something of a cliche.  He may, or may not, be an illegal immigrant (he’s been in the country for decades but can’t remember if he has official citizenship) and during this time he’s picked up certain English speech mannerisms which are intermingled with his strong Indian accent.  But although he’s a broad stereotype (reinforced by the fact he’s sold his daughter umpteen times) there’s a certain twinkle in Jaffrey’s performance which prevents him from being a totally unlikable character.

If Mukerjee still retains something of his ethnic roots, then his daughter Indira is the complete opposite.  She has a broad Cockney accent and has no interest in even contemplating an arranged marriage.  Shireen Anwar is delightful as the outspoken Indira and whilst it’s clear that she immediately captures Terry’s attention, she only has eyes for the gormless Kev.  Mike Grady has made a good career out of playing gormless characters (Citizen Smith, Last of the Summer Wine) and Kev is another addition to this list.  There doesn’t seem to be any obvious reason why the vivacious Indira should be attracted to him – so it must be love.

There’s some great banter between Arthur and Terry in this episode.  It doesn’t advance the plot at all, but it’s just lovely to see.  Early on, Terry tells Arthur that he’s thinking of jacking the job in – throwing drunks out of pubs and repossessing cars isn’t a fulfilling career for him.  He then mentions that he’s contemplating a career in computers, much to Arthur’s intense amusement.  Arthur tells him he can’t even work a pocket calculator, so how would he be able to deal with a computer?  After a moment, Terry reluctantly agrees, but remains convinced he could learn!

Later, Arthur drops off a number of frost-damaged freezers (yes, Terry wondered how freezers could be frost damaged as well!) to Terry’s flat in the early hours of the morning.  This is classic Arthur, as the notion that Terry may not be keen to take delivery of the freezers obviously never even crossed his mind.  And when Terry wonders why Arthur couldn’t store them at his house, he has plenty of decent excuses.  They wouldn’t go with the flock wallpaper for a start and what would happen when his friends from the Lodge came over for a drink?  It wouldn’t create the right impression, would it?

There’s some familiar faces on view.  Stanley Lebor, later to play Howard Hughes in Ever Decreasing Circles, here takes his more familiar 1970’s role as a heavy (his fight with Terry concludes the story).  Spencer Banks (probably best known from Timeslip) plays a young drunk who Terry throws out of a pub.  I knew his face was naggingly familiar, but it wasn’t until the credits that it clicked exactly who he was.  Roy Evans, a very recognisable face from this era in both films and television, has a small role as a customer in the newsagents.  He’s credited as “Elderly Man” which is interesting since he was only forty-eight at the time.  Clearly he had one of those lived-in faces.  And lastly, Graham Stark keeps on popping up to harangue Terry.  Stark gives a broad performance, but it’s a nice bit of comic relief (even if the story itself isn’t terribly serious anyway).

Thanks to Terry’s diplomacy, everything is sorted out in the end and Indira and Kev don’t have to elope.  Given the time that’s elapsed since the original broadcast (back in 1979) some of themes, especially the interracial marriage, would have seemed far more controversial back then than they do now.  Attitudes have certainly changed – for example, Kev is casually able to mention that he and Indira need to find a place of their own since they can’t stay with his mother (she doesn’t mind living next door to them, but she doesn’t want one in the house).

Another solid script from Leon Griffiths.

One thought on “Minder – The Bengal Tiger”