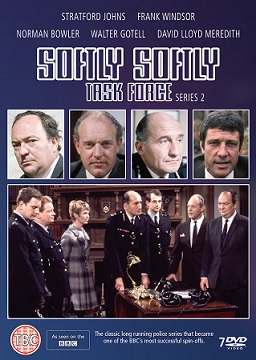 The second series of Softly Softly Task Force, the classic long running hit BBC police drama, is coming to DVD for the very first time in the UK on 26 September 2016. A revamp of Softly, Softly, itself an offshoot from Z-Cars, it has become one of the BBC’s most successful spin-offs.

Stratford Johns (Z-Cars) stars as the no-nonsense DCS Charlie Barlow, a superior officer not averse to thrashing his suspects into submission, and Frank Windsor (Z Cars) as his mellower sidekick DS John Watt. Together with their special squad, they tackle the toughest cases Thamesford has to offer.