PC Snow and Radar are patrolling in the park, where they meet an old lady called Miss Thomson (Sylvia Barter).  She’s clearly agitated and Snow, seeing this, suggests she tells her story to Radar.  As strange as this seems it does the trick and Miss Thomson explains that she’s worked as a bookkeeper at a local company for the last fifteen years.  It’s recently been taken over by a man called Overson (Jonathan Newth) and Miss Thomson is concerned that something fraudulent is going on.

The opening scene has another example of a film/VT mix which isn’t very effective.  Location filming always cost more (and was a lengthier process) than taping scenes on videotape in the studio, so it’s easy to see why SS:TF tried to limit the time they spent on location.  The problem comes when you mix film and videotape in the same scene.  Here, the establishing shots of the park are on film.  We them move to videotape for the dialogue, which is jarring enough, but there’s also a moment when Terence Rigby delivers several lines on videotape with a film background.  This looks very odd indeed.

PC Snow is a copper rather in the Dixon mould, shown by the way that he has time to stop and chat.  Possibly this might also have something to do with the fact that he spends most of his time with Radar.  He admits he does talk to his dog, but presumably the dog doesn’t answer back!

Sgt Jackson (David Allister) is a more complicated figure than Snow.  He tended to exist around the fringes of the action in series one and rarely initiated events.  Unlike the much more avuncular Sgt Evans, Jackson doesn’t seem to possess any sense of humour and is also deeply ambitious.  We see an example of this here – Hawkins is happy to shuffle off the job of investigating the fraud to the Commerce Division, but Jackson is keen to keep it in-house.  He argues that it’ll be good experience for them (and won’t look bad on their records if the right result is gained).

Jackson, clearly enjoying being in charge, sends Snow around to the company warehouse to sniff around.  He meets the manager, Bert Fowler (Douglas Livingstone) and the assistant bookkeeper Betty Adams (Marilyn Harrington).  Both are friendly enough to Snow’s face, but clearly have little time for the police.  Because they have something to hide?  For his part, Snow’s not impressed with Betty, later telling Hawkins that she’s “a little tartlet and tough with it.”

When Barlow finds out that Jackson is running his own enquiry without the authorisation of the Commerce Division, he entertains himself by making the Sergeant sweat for a few minutes.  There’s no finer sight than Barlow in full flight, although he’s prepared to wait and see what Hawkins and Snow (on photographic reconnaissance) turn up.

When Hawkins and Snow return, Barlow continues in pretty much the same vein, taking shots at all of them.  I also love Stratford Johns’ reaction when PC Snow admits that he talks to Radar.  Barlow succulently sums the situation up. “Barmy. I think this is a nut house, not a police office.”

The crime in this story is very much secondary to the interactions of the regulars.  I’ll probably end up sounding like a broken record as I make my way through the series, but Stratford Johns is always so amazingly watchable.  When he leaves SS:TF for yet another spin off series (hopefully Simply will consider releasing Barlow in the future) it’s going to leave something of a hole.

Jonathan Newth, an actor who’s appeared in a score of popular series from the 1960’s onwards (and is still going strong today) is perfect as the icy kingpin.  He considers himself to be fireproof (as the police aren’t interested in long frauds) but now that Barlow’s on the case all bets are off ….

Another good script from Elwyn Jones. 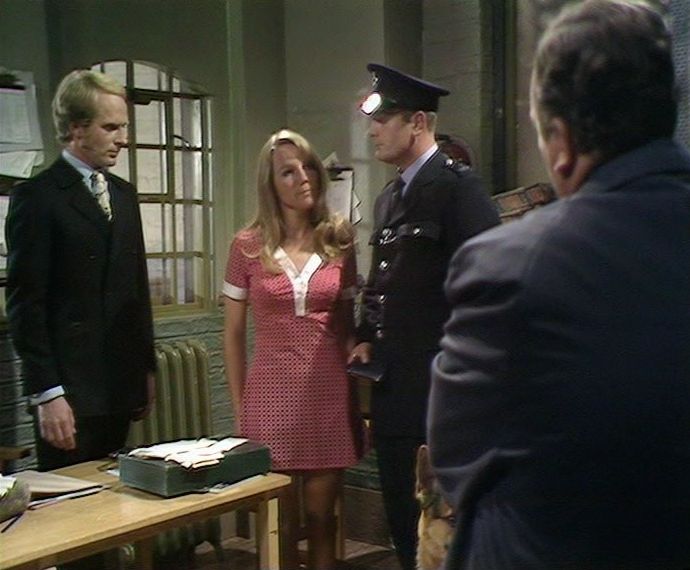