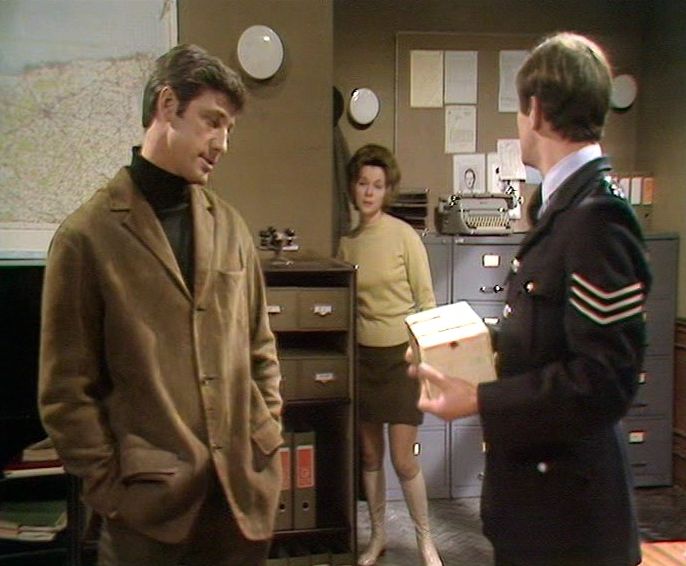 Sergeant Jackson spots a familiar face by the docks.  Ingram (Leon Eagles) has been out of prison for a month or so, but it’s what he was sent down for that interests Barlow.  Along with a man called Thomson (Jonathan Holt), Ingram stole a cargo of ingots worth fifty thousand pounds.  So Hawkins is sent to investigate.

Ingram’s been asking about a man called Bruton.  It quickly transpires that he’s a link in the ingot chain, but Bruton’s death has complicated matters.  When Ingram goes to visit another person connected to the crime, Maitland (John G. Heller), there’s a gratuitous info-dump that’s simply breath-taking.    Maitland asks Ingram to refresh his memory and tell him about how the robbery was committed (even though Maitland already knows all about it).  It’s an incredibly clumsy way of bringing the audience up to speed and not really necessary anyway, since at this point we’re only ten minutes in.

But clumsy though it is, it does make the plot very clear.  Ingram and Thomson entrusted their cargo to Bruton, who planned to ask his son Peter (John White) to take it over to Holland on his barge.  But Ingram and Thomson were arrested and unable to contact Bruton and now Peter denies all knowledge of the ingots.

Sadly Time Expired is the first dud of series two.  Barlow doesn’t do a great deal and there’s no sign of Evans or Snow (who can both be guaranteed spice up a middling script).  Instead, Hawkins and Donald take centre-stage.  Norman Bowler and Susan Tebbs are both fine at what they do, but since Hawkins and Donald are rather conventional characters they tend to cancel each other out.

The story is given a little lift when Thomson is released from prison.  We’ve already been told that he’s not going to be pleased that the ingots have disappeared – and it’s true that he does seem a little miffed.  But the tension is still played at a very low key (a spot of gratuitous violence from Thomson might have spiced things up, but it wasn’t to be).

And by now the viewer will be pondering one very obvious question.  Ingram and Thomson have both been in prison for three years, so why have they made no attempt to find out what’s happened to the ingots until now?  Maybe they’re just rather trusting fellows, but it all seems a bit odd.

The main problem with Robert Barr’s script is that we don’t feel invested in the hunt for the ingots, mainly because Ingram and Thomson are such pallidly drawn characters.  There’s some nice location filming, but that aside, this one is rather forgettable.