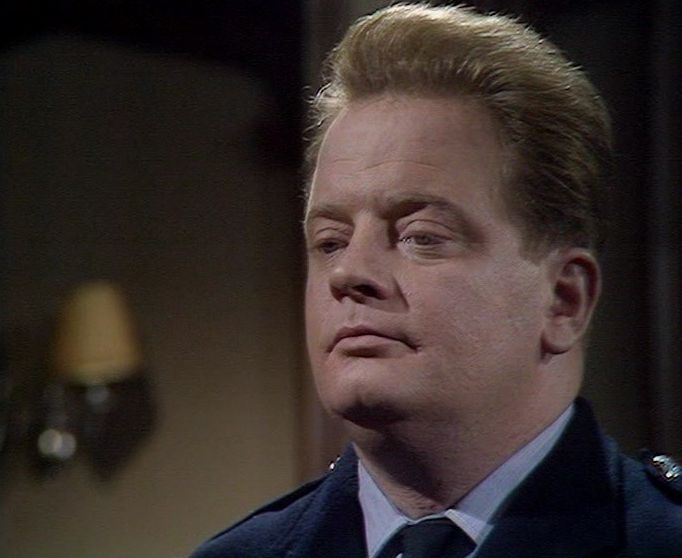 Evans pays Mrs Marlowe (Colette O’Neil) a visit.  He’s looking for her husband Jack, but is told that he’s working up North (“building a motorway so that the crime cars can get around a bit faster”).  This comes a something of a relief to Evans – there’s been a spate of robberies in the area and Jack (as an ex-convict) is an obvious suspect.

He’s been going straight for two years but is still likely to be of interest to the police after any suspicious activity in the area.  Evans blames the system for this, but it’s a moment that provides a sharp insight into policing methods – when you have no evidence, give some likely suspects a tug.  There’s no vindictiveness on Evans’ part though.  He claims part of the credit for helping Jack to go straight and therefore has something of a vested interest in seeing him keep out of trouble.

If crime doesn’t pay, then it appears going straight doesn’t either.  The Marlowes live in a grimy room in a grimy part of town.  With a background of barking dogs and screaming children, it’s a desperate sort of place.  On entering their room, Evans lights up a cigarette  and offers Mrs Marlowe one.  After a brief pause – presumably because nobody ever offers her anything for free – she accepts.  It’s odd to see an officer smoking on duty, but we can interpret it as Evans’ attempt to put her at her ease.

An off-hand remark about her poor accommodation catches Evans’ interest.  She tells him that there’s no point in complaining  to her landlord, Spence (Donal McCann), as he’d only send some of his boys around to “persuade” her to keep quiet.  Evans files this away for later.

We then switch to the Chief Constable’s office, where he’s delighted to let John Watt know he’s delegated him a very important job – speaking to the Kingley Rotary Club on crime prevention.  The juxtaposition between two very different sections of society was no doubt intentional on Alan Plater’s part and we return to this theme at the episode’s close.  Watt’s far from delighted with this important mission but begins to plan his speech anyway.  A few jokes will be essential to ensuring that everything goes off smoothly, and he’s informed that PC Snow is the man to see.  “Probably tries them on his dog” mutters Watt.  This is a lovely moment, but there’s even better to come after Snow tells him one of his best jokes.  Watt’s unimpressed expression is a joy to behold!

Evans decides to pay Spence a visit.  He’s also the boss of a local amusement arcade, which provides us with a brief nostalgic glimpse of a number of old-fashioned one-armed bandits and the like.  Spence isn’t impressed with Evans’ comment that the properties he owns are dirty and rundown.  “Dirt’s the responsibility for the people who make the dirt. Well, look at me. Look at this office. Am I dirty?”  He denies sending heavies to harass his tenants and since Evans can’t prove that he does, there’s something of a stalemate.

Since there’s no evidence of wrongdoing, it’s easy to see how Spence can later complain to Watt about Evans’ visit.  When he claims that Evans’ actions are motivated by personal enmity, it’s not an outrageous statement.  Evans clearly dislikes Spence – a slum landlord who also runs an arcade that takes money off the poor and vulnerable – but Spence counters that he’s simply offering people a service.  In many ways, this smoothly-dressed, fast-talking man looks ahead to the Thatcherite 1980’s.

The two-handed scene with Lloyd Meredith and McCann is the heart of the story.  Evans is convinced that Spence is a villain, it’s simply that the police haven’t found any evidence yet that’ll stand up in court.  In Evans’ view (and it’s no doubt one shared by many of his colleagues) Spence is a lower form of criminal life, because he doesn’t accept that he’s a villain.  Career-criminals – those who come quietly after being caught – garner a certain amount of respect from the police.  But Spence is quite different.  “You steal off other people just as much as a bank robber. You steal off their weakness. And all the time you try to justify it by garbage about providing a public service.”

Evans is later hauled over the coals by Cullen and Watt.  He admits that he wouldn’t have spoken to Spence in the way he did if it had been a formal interview or if there had been anybody else present.  It was simply a speculative interview that was intended to rattle Spence’s cage.  Cullen concedes that Evans hasn’t broken any rules and so there’s no question of a disciplinary charge but Watt has a few comments to make.

Watt starts by admitting that they all bend the law from time to time(!) but goes on to label Evans a “bloody bad policeman” and spells out the reason why.  Evans loathes Spence, which is wrong.  “Feelings get in the way of judgement. Feelings make coppers start thumping when they should be talking, asking questions, getting information. Forget about feelings, you can’t afford them.”  All Evans has done is to warn Spence to be on his guard.  But Watt agrees with Evans that he’s probably a crook and will keep an eye on him.

The story closes with the juxtaposition of Watt’s speech to the Rotary Club and Evans’ return to speak to Mrs Marlowe.  Watt’s speech is a plea for public co-operation, mirrored by Evans’ attempt to persuade Mrs Marlowe to provide evidence against Spence.

The contrast between the well-heeled Rotarians and the shabby environment inhabited by Mrs Marlowe is striking.  Mrs Marlowe is non-committal when Evans asks for her help, although she doesn’t dismiss it out of hand.  If she does co-operate, it may be because Evans has treated her and her husband with respect in the past – which can be seen as a victory for a non-confrontational type of policing.  Whilst Watt appeals to the Rotarians sense of public duty, Evans admits to Mrs Marlowe that he dislikes Spence and wants to put him behind bars.  It’s plain that Evans has pitched his appeal at her level – if he, like Watt, had played the public duty card he probably wouldn’t have got very far at all.

Remarkably, although there’s no actual crime in Without Favour, it’s still an absorbing fifty minutes.  Both the unseen Jack Marlowe and the very visible Spence may feel aggrieved at being questioned by the police when there’s no evidence connecting them to crimes, but if you’re an ex-criminal (like Jack) or someone operating on the fringes (like Spence) then it appears that’s just a price you have to pay.  Alan Plater is skilful enough to keep his voice neutral throughout, so it’s left to the viewers to decide whether he condemns or condones this practice.