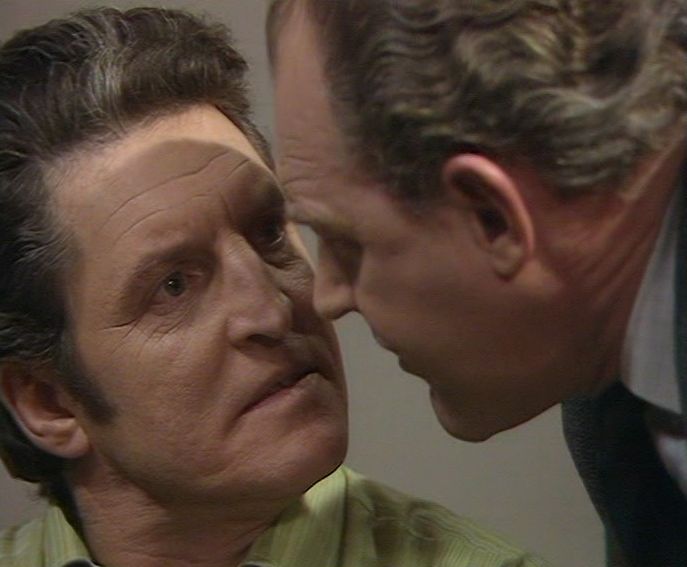 The Task Force are out in numbers, looking for safebreaker Tommy Lee (Norman Jones).  Watt suspects that Lee was responsible for three recent robberies (in the latest, a security guard was shot and injured).  Hawkins brings in Jack Taylor (Denis Quilley), a known associate of Lee – although unlike Lee, Taylor has never been convicted of any crime.  Hawkins is convinced that Taylor knows where Tommy Lee is, but he proves to be a tough nut to crack ….

After a run of indifferent episodes, Robert Barr finally comes up with something very decent.  The clash between Hawkins and Taylor (and later Watt and Taylor) is most watchable, although the story does have one major plot flaw.   Watt strongly suspects that Lee and Taylor are partners and also that Lee will attempt to contact Taylor at the filling station he owns.  If that’s the case, then why bother to arrest Taylor?  They could have simply posted a few men in the vicinity, well hidden, and nabbed Lee when he turned up (which is pretty much what they do in the end anyway).  And since neither Hawkins or Watt manage to get Taylor to talk, the whole evening at the station has to be written off as a complete waste.

Denis Quilley was a heavyweight actor (he enjoyed lengthy spells at the National Theatre aappearing opposite the likes of Laurence Olivier and John Gielgud) which means that his casting helps to give Held for Questioning an extra lift.  To begin with, Taylor claims he hasn’t seen Lee for five years.  Later he admits that they have met a few times recently, but that he’s not involved with Lee’s criminal activities.

Taylor maintains an air of amused indifference during his interview with Hawkins.  He rarely seems flustered, meaning that any progress Hawkins makes is agonisingly slow.  There are a few flashpoints but it’s not until Watt turns up that the sparks really start to fly.  Watt asks exactly the same questions, but does so in a highly aggressive manner, causing the first signs of real anger from Taylor.  Windsor and Quilley – facing each other eyeball to eyeball – are both mesmerising in this scene.

There’s also a fascinating clash between Taylor and the duty officer, Chief Inspector Rankin (Michael Griffiths).  Taylor is well-known to the officers at the station, especially Rankin.  When the Chief Inspector pops his head around the interview room door, Taylor takes the opportunity to aim a few will-timed jibes in his direction.  His claim that he was attacked by several officers the last time he was there could be dismissed as simple troublemaking, but Cullen’s arrival confirms that it did actually happen (and officers were suspended).

Given that Taylor’s never been convicted of any crime (up until now) this moment shines a little light on police methods at the time.  Barr’s script doesn’t condone or condemn, but the inference is plain – it’s also spelled out earlier by Hawkins – you may be innocent in the eyes of the law but that doesn’t stop you from being regarded as guilty by the police.  It’s a brief, but disquieting, moment.

Norman Jones, as Lee, doesn’t have a great deal to do as he’s holed up for most of the episode, vainly attempting to contact Taylor.  In fact it’s easy to see how the story could have dispensed with his on-screen appearances completely (a quick message to say that he’d been captured would have sufficed).  Indeed, if the story really wanted to do something a little different then it could have taken place entirely within the confines of the interview room (at first I thought that was the way the episode would go).  A bit of a shame they didn’t go down this route, as all the best scenes do take place within the interview room, everything outside is of secondary importance.

A few minor quibbles apart, this is a fine showcase for Windsor, Bowler and Quilley.