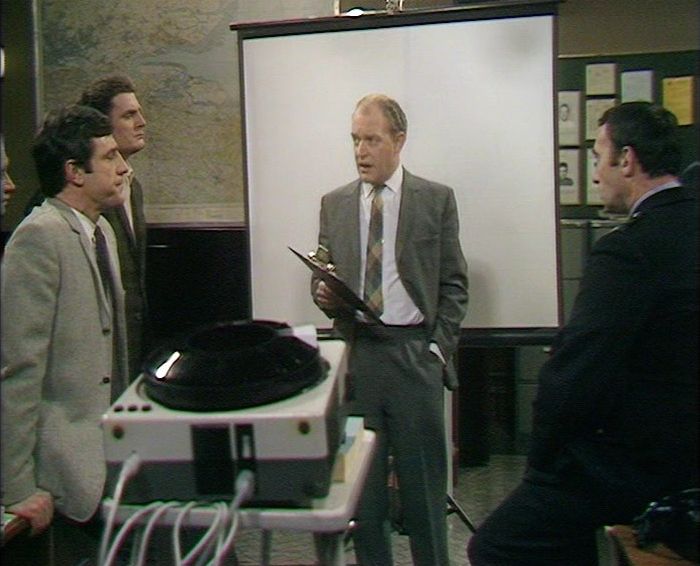 Stock is being pilfered from a local Cash and Carry.  The two men responsible – James (David Spenser) and Fox (Roland Curram) – are quickly identified but Barlow is concerned that this relatively small-scale affair might only be the prelude to a larger crime.

Cash and Carry is one of those stories which is more than content to take its time.  We initially see Snow and Radar, passing the Cash and Carry at night, become suspicious after they spy a light inside the building.  Officers are then called out in force along with the keyholder Mr Lodge (Peter Sallis).  None of them find anything so they leave empty-handed.  By this time a good ten minutes has elapsed without the plot advancing a great deal.

The next day it’s quickly worked out how such a large amount of stock could have gone missing – James and Fox work at the Cash and Carry, driving the delivery van, and they simply pile it up with stolen stock and sleep in the building overnight, leaving the next morning as if nothing has happened.  Donald likens it to the Trojan Horse, which is a neat description.

But this crime is so humdrum that there has to be more to the story.  Barlow seems to think that an attempt will be made to rob the cashiers department on its busiest day (when there could be as much as twenty thousand pounds for the taking).  If that’s the case (and Fox and James were the gang’s inside men) then it seems very foolish for them to have jeopardised the whole operation in order to make a little profit on the side.

Possibly the weakest part of Elwyn Jones’ script is Barlow’s sixth-sense which decides that an armed robbery is the real endgame.  Just how did he work this out? The story would have probably been more satisfying if the information about the intended robbery had come from an informer and the stock pilfering section had been excised (the time spent on this dead-end part of the plot could have been used to develop the individual characters of the gang).

Barlow and Cullen clash over the potential operation.  Barlow believes that the gang stand their best chance of succeeding if they make their attempt before the security guards arrive to take the money away, i.e. when the store is still open. Cullen argues that if they let things play out then innocent members of the public could get hurt.  Barlow agrees, but he wants to catch them in the act and not just arrest them for conspiracy.  Given that Cullen has always been portrayed as strong-willed and single-minded it seems a little uncharacteristic that he reverses his opinion so quickly and allows the covert operation to go ahead.

When Donald replaces one of the cashiers it’s easy to believe this is something of a sexist move (seemingly the only woman on the Task Force working at the till).  But amusingly this is undercut just a few seconds later when Barlow tells Lodge that he plans to replace another of his cashiers with Armstrong, who he says even looks like an accountant.  And with Watt dressed in overalls, shifting boxes into the back of a lorry, there’s another brief moment of humour to be enjoyed.

Will there be an attempt to steal the cash?  Looking down the cast list, names such as Alan Chuntz, Dinny Powell and Terry Walsh should provide you with the answer. Although it’s fair to say that it’s a very long build-up for such a brief moment of mayhem (nobody’s ever going to mistake Softly Softly: Task Force for The Sweeeny).  Evans gets shot, but only in the leg, so I’ve a feeling he’s going to live.

Even allowing for a few fisticuffs, Cash and Carry concludes the second series in a pretty low-key way.  It lacks the character drama that characterised most of the other stories, so has to go down as one of the lesser entries.  But generally the standard across the twenty six episodes was very consistent and I hope that it won’t be too long before series three is available.