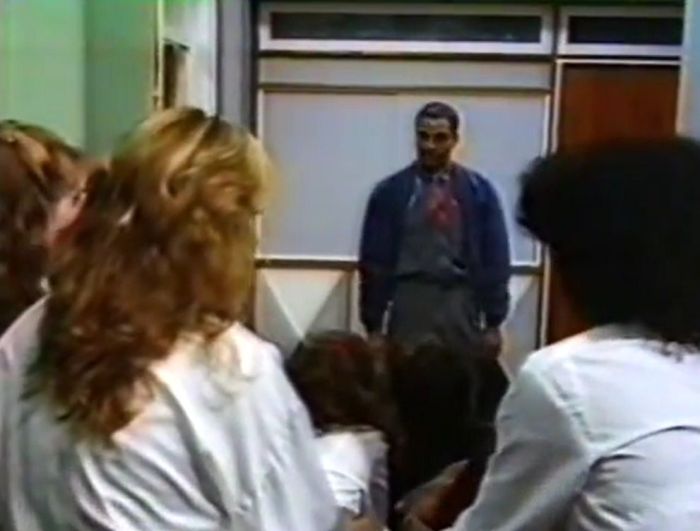 The overcrowding becomes chronic as Mr Kennedy is forced to conduct a drama lesson with G3 on the stairs. Most enter into the spirit of things although Laura isn’t pleased about the way having to squat on the stairs is dirtying her uniform whilst Danny just isn’t pleased. He makes it plain that he’d sooner be anywhere else but here – pretending to be a passenger aboard a spacecraft just isn’t his forte.

Ziggy and Robbie’s plan to gain revenge on Imelda continues.  They conjur up a noxious, sticky brew and are all set to deliver the killer blow.  I wonder what happens next?  Oh yes, Mr Griffiths just happens once again to be in the wrong place at the wrong time and ends up being the unwilling recipient of their hard work.  There’s an undeniable predictability about this, but a touch of knockabout farce is always welcome plus it helps to balance out the more serious themes elsewhere.

A fair amount of this episode takes place outside the school grounds. Therefore we’re presented with ample local colour as Ant and Georgina walk past the canal (with towerblocks in the distance) and elsewhere Jackie stalks Zammo down the local high street. The early series of GH had a strong inner-city feel, which has tended to fade away more recently, so these scenes help to reconnect the characters to their environment.

Mrs Reagan is convinced that all is not well with Louise’s family and asks Laura and Julia to investigate. Laura’s initially reluctant to act as a spy, but soon enters into the spirit of things.

But it’s Zammo and his problems which are dominating.  This episode gives Doug (Paul Vincent) his first dialogue – a few episodes back Jackie had spotted him and Zammo in the distance.  Just by looking at him we can tell that Doug’s bad news – and if any further evidence was needed, the way that he and Zammo rifle through Mrs McGuire’s belongings, looking for anything decent they can sell, should confirm our suspicions.

Doug finds slim pickings, but a cut glass decanter makes his eyes light up (Barry Manilow records less so). The flat scene was recorded on location rather than in the studio which means that like the previous location scenes it helps to firmly ground this episode in mid eighties London.

Mrs McGuire makes the first of her handful of series nine appearances next time.  It’s slightly odd that she’s been held back until this point as you’d have assumed there would have been a certain amount of dramatic mileage to be gained from her interactions with Zammo.  Maybe the intention was not to foreground precisely what Zammo’s problem was too soon, but it does feel slightly odd.

Zammo’s increasing isolation from his friends and family makes sense, but it’s notable that – Jackie apart – we’ve not seen anybody express concern about him.  Apart from the dramatic possibilities missed, this maybe sends out the wrong message – friends and family should be the ones primed to spot danger signs and then attempt to help. Maybe the message here is that had Zammo’s friends been more active the situation wouldn’t have spiraled out of control.

This was the first GH episode written by Sarah Daniels.  Daniels (b. 1957) came to prominence as a playwright in the early 1980’s and by the time that decade was over had penned a series of challenging plays, all of which had a strong feminist streak.  Critic Carole Woddis once called her “the only radical lesbian feminist to have made it into the mainstream”.

The same year that she debuted on Grange Hill, her play Neaptide was running at the National Theatre.  Neaptide has recently been performed again at the National as a rehearsed reading (it launched the National’s short Queer Theatre season).  It’s interesting to ponder whether the school setting of the play informed any of her work on GH.

Grange Hill wouldn’t seem at first glance to be the obvious television programme for her, but clearly she found working on the series to be stimulating, since she would go on to write sixty six episodes between 1986 and 2007.  This impressive unbroken run, stretching from series nine to series thirty (although for some reason she didn’t return for the series’ thirty first and final series), is easily her most substantial television contribution (elsewhere she penned a handful of episodes for EastEnders and Medics).