Out for an early morning jog, Robert (John Hannah) witnesses a shocking murder. A man later identified as Brond (Stratford Johns) casually pushes a young boy over a bridge. But this sudden act of violence is only the beginning as Robert finds himself embroiled in Brond’s scheme to trap an IRA killer ….

Adapted by Frederic Lindsay from his own novel and broadcast in 1987, Brond is one of those 1980’s thriller serials (along with the likes of Edge of Darkness and Dead Head) which eschew narrative clarity in favour of something much more non-linear. But given that Lindsay’s novel was rather baffling in places, it’s no surprise that his television adaptation was also opaque.

Brond’s first appearance is ridiculously memorable. Pushing the boy over the bridge without a second thought, Brond then casually winks at Robert as he passes by.  What’s especially interesting about this scene is that until the incident is revisited towards the end of the serial it’s possible to believe that Robert was hallucinating and that there actually was no murder.

Brond might have been John Hannah’s television debut (a major role for such a newcomer) but Alan Stratford Johns was an old hand. He’ll always be best remembered for playing Charles Barlow in a string of BBC police series (Z Cars, Softly Softly, Softly Softly: Task Force, Barlow) but he also had a rich and diverse career before and after his time with the police force.

Brond was one of his later signature roles though – it certainly made a considerable impact at the time and it’s not difficult to see why. Brond is a peach of a part and it offers Johns a number of wonderfully constructed monologues and set piece scenes. The first occurs at a university party, where an increasingly disconnected Robert views Brond in a mirror. The framing is so non-naturalistic that the exact reality of the situation seems to be in doubt (as with the boy’s murder).

Satan must be defeated. But never is quite. So we owe red roses and sunsets to Satan’s joy in being master.

Brond’s materialisation by Robert’s hospital bed is another peculiar and jolting moment. Why the whole ward is suddenly bathed in an unearthly red light is a mystery which is never explained. And yet again Brond’s elliptical, gnomic utterances don’t help to make the situation any clearer. 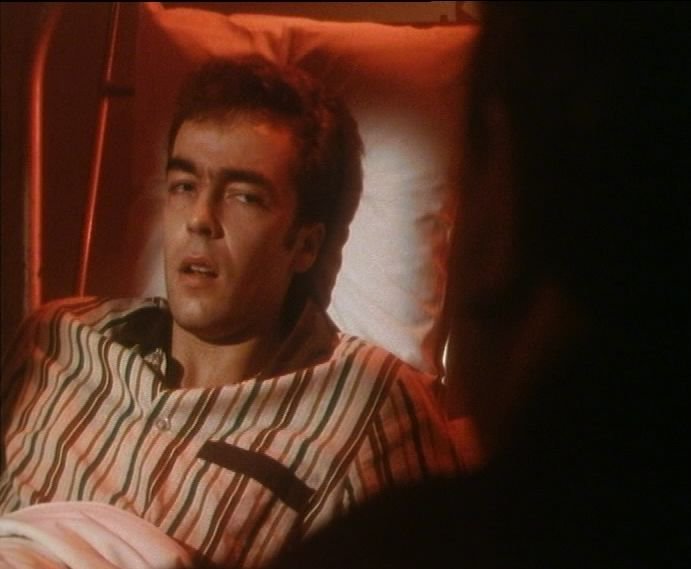 I remember Paris, young men, far from home. The story was written to make a little money, concerning a lady and her victim who was quite willing – eager to suffer and obey. She did terrible things to him, she might have killed him. But it was all innocent daydreams, some wonder drug of science fiction. So when it was over, no blood, no regrets, just a man and woman and a warm summer evening. Wasn’t that a better world to live in?

In the wrong hands this sort of florid material could easily fall flat, but it’s testimony to Johns’ skill that he makes moments such as these utterly compelling.

Aside from Johns and Hannah, there’s a strong supporting cast. James Cosmo, as Primo, looms menacingly throughout. Although connected to Brond, he also latches himself onto Robert. Louise Beatty (Margaret) also impresses whilst it’s always a pleasure to see Christopher Ellison. A number of other familiar faces, such as Russell Hunter, pop up in minor roles.

As we proceed to the second episode, the plot only becomes more labyrinth. Robert’s mysterious landlord, Kennedy (Ian McElhinney), casts a menacing shadow whilst the murder of a fellow lodger, Kilpatrick (Laurie Ventry), and Robert’s discovery of a gun wrapped in a blood-soaked cloth are further pieces of the disorienting puzzle. Robert’s later police cell conversation with a gardner (Phil McCall) is another of those strange Brand moments.

The final episode sees Robert released into Brond’s care. Stratford Johns is on fine form, especially when in interrogation mode. Things then go very strange after the pair pay a visit to high class brothel. Brond has some peculiar ideas about entertainment (and isn’t fussy about who might be looking in). There’s also an intriguing callback to the murder of the boy from episode one and some of the loose ends are tied up. Other aspects of the story (notably why Brond latched onto Robert) remain open to interpretation.

Critical reaction at the time was pretty positive.  The Stage (14th May 1987) reviewing the first episode, declared it to be “a jigsaw thriller, in which you are not expected to see the picture until most of the pieces have slotted into place”.  Johns’ performance (“Brond isn’t the sort of man you would want as a babysitter. He speaks in a calm, measured voice, at once chilling and reassuring”) drew praise as did John Hannah (“a likeable dupe, whose jokes always seemed to fall on deaf ears”).

The three episodes (each approx. 50 minutes) are contained on a single DVD.  The all-film production is unrestored, but for a thirty year old serial is in pretty good shape with no major picture issues.  There’s no special features and, as per Simply’s other recent C4 releases, no subtitles (it appears that Channel 4, unlike the BBC, don’t require subtitles to be added).

Featuring a haunting title theme by Bill Nelson and Daryl Brunswick, Brond lingers long in the memory. The lack of a clear narrative means it won’t appeal to all, but since there’s so much of interest – notably the performances of John Hannah and Stratford Johns – it’s hard not to be drawn into this dark, twisted world.