I started collecting the Targets back in the late seventies and although the identity of the first book I bought has been lost in the mists of time, I do know that The Auton Invasion was one of the earliest ones I picked up.  I had no recollection of its original broadcast, so possibly it was the cover – featuring the Doctor, Brig and a nasty squid – that drew me towards it.  Whatever the reason, I’m glad that I did get it because it’s a bit of a corker ….

Possibly since it was his first book, Terrance Dicks seemed quite keen to add a considerable amount of extra value to Robert Holmes’ original script (although it’s true that back in 1974 he wasn’t on the same one-title-a-month treadmill that saw him churning out a crop of fairly routine titles later that same decade).

Adding a prologue featuring the Second Doctor’s trial was a good move as it helped to explain exactly why the Doctor turns up insensible in Oxley Woods (back then, this sort of information wasn’t available at the drop of hat). But what really stands out from the first few chapters is the way that Dicks very deftly manages to transform Sam Seeley from the television comic bumpkin into more of a rounded character.

Having him witness the Doctor’s arrival in the woods was a nice touch and there’s some economical examples of character building scattered throughout (such as the moment when a worried Seeley, lying in bed, is disturbed by the sound of rumbling lorries and grim-faced soldiers passing by his window).  This helps to reinforce the notion that the meteorite he’s found could be dangerous (unlike the television Seeley, he never refers to it as a ‘thunderball’).

Seeley’s daydreaming is another effective touch. ‘Sam let his imagination wander, dreaming of a huge cash reward from a grateful government. He’d have his picture in the local paper. Maybe they’d even want him to go on telly’.

The first meeting between the Brigadier and Liz is good fun, I particularly enjoyed Liz’s internal reaction to the Brigadier’s assertion that he had been involved in foiling two alien attempts to invade the Earth (‘He’s cracking up, she thought wildly. Over-work probably. Been reading too much science-fiction’).

Many of the changes made by Dicks to the text are small, but they nevertheless help to strengthen the story. For example, the television Brigadier can only offer the weak excuse of a training exercise to explain his presence when confronted by a gaggle of pressmen eager to find out if the Ashbridge Cottage Hospital really does contain a man from space.  The book Brigadier has a much smoother and more convincing cover story – a vital part of the British space programme has come crashing down in the woods nearby, necessitating a search and recovery programme.

Dicks mentions several times in quick succession that the Doctor’s kidnappers are rather like waxworks (which tends to hammer this point home – one would have been enough). Rather more effective is Doctor Henderson’s shocked realisation that the kidnappers hand was totally smooth and white, lacking any fingernails. This would have been hard to realise on television, but was simplicity itself in print.

Another small touch which entertained me was the revelation that the frilly shirt the Doctor ‘acquires’ from the hospital had once been the property of an aspiring pop star. The past tense does suggest he never made it out alive though ….

The book Beavis is simply itching to open the Doctor up and have a poke inside, which helps to explain why the Doctor feels perfectly justified in stealing both his clothes and his car (‘Serve the old butcher right’).  The idea of the Doctor having to masquerade as Beavis in order to pass the guards is an appealing one, as is the fact that the Doctor gives the unfortunate Beavis a cheery wave goodbye when he’s in the process of stealing his car!

The Auton attack on the UNIT jeep is somewhat remodelled. On television, the solider dies as soon as the Auton forces the jeep off the road – in print, he emerges unscathed and manages to pump the Auton full of bullets – all to no avail though (this helps to pre-empt the later confrontation between the Auton and Meg Seeley).

One fascinating addition to the Auton stand-off with Meg is the way that Sam braves his fire in order to rescue his wife.  Seems a little out of character, although maybe we’ve just been misjudging him.

The Doctor and Liz head off to the waxworks, much to the Brigadier’s disgust.

“Hey, wait! Just a moment,” the Brigadier called after them. Then he shrugged his shoulders. Let them go to the waxworks. Let them go to the Tower of London, Buckingham Palace and the London Zoo while they were at it! And much good might it do them. As usual all the real work was left to him. Like children, these scientists!

Lovely stuff. Also very appealing is the Doctor’s explanation as to why he and Liz have to hide in the waxworks after closing time (which isn’t made clear on screen).  Since he’s been unable to contact the Brigadier, the Doctor decides to impound the waxworks himself. When Liz reacts with amazement at the suggestion they simply walk out with the things, the Doctor counters thus. “But we should be able to manage one or two little ones, surely?”

Terrance Dicks faithfully reproduces the emergence of the shop window Autons, then with just a few paragraphs he’s able to sketch out what happened next – something which, of course, was impossible for budget reasons to realise on screen.

The police received thousands upon thousands of calls. But there was little they could do. Arms were issued, but the few rifles and revolvers available were powerless against the Autons. BBC and ITV issued urgent warnings. ‘Don’t go to work. Don’t go out shopping. Stay indoors and barricade yourselves in your homes. Admit no one you do not know.’

Many people were saved by warnings like these, but many others, already out on the streets, were unable to escape. The Autons seemed to be everywhere.

The Government declared martial law and called out the Army. But most of the available troops were mysteriously absent on manoeuvres far away from the big towns. They were recalled at once, but things seemed to go wrong continually. Orders failed to arrive, or were misinterpreted. Troops were told to stay put, or sent to the wrong place. In the other services the story was the same. The Navy and the Air Force armed what men they could, but the men never seemed to get clear orders, or to arrive where they were wanted. It was as though in every position of authority traitors were working against the Government, deliberately confusing the situation.

When I bought the VHS in 1988, I was a little disappointed that the scene featuring an Auton attacking UNIT HQ didn’t feature. But as one of the generation who encountered many Doctor Who stories via Target books first and VHS second, this was a common occurrence.  I’m sure other examples will follow in later posts.

The emergence of the Nestene consciousness is obviously much more effective in print than it was on television (no rubber tentacles here). Chris Achilleos’ illustration helped – he may not have enjoyed doing the internal illustrations but they’re all part and parcel of the story-telling process (even if the supporting characters look nothing like their television counterparts).

Yet another favourite, The Auton Invasion has to be one of the Targets I’ve read the most. Revisiting it yet again in 2018, nearly forty years on from my first time, I’m delighted to report that it’s still an enjoyable, breezy yarn. 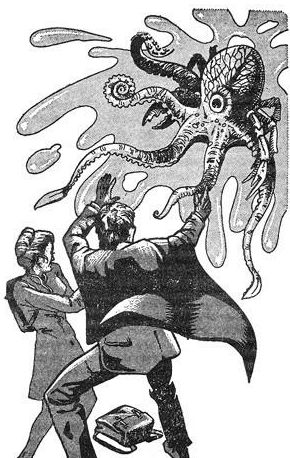