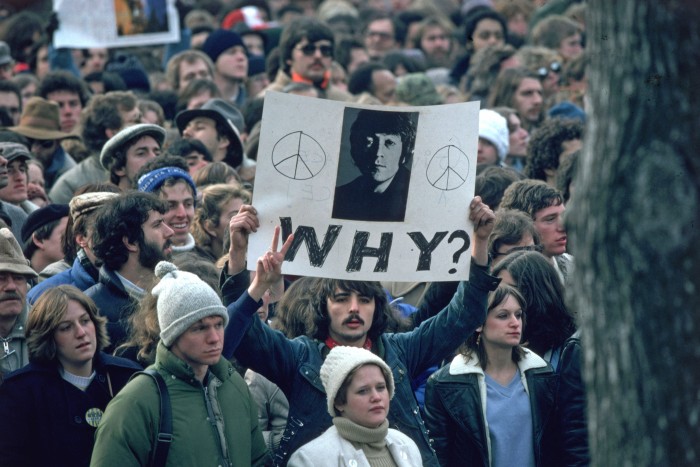 The new programmes did feel a bit tacked on, and the pop scene in the mid-eighties was less interesting than in the early seventies, it was a period when the pop scene went from post-punk to “like punk never happened”, although the new events are no less interesting. But the series couldn’t have had a better note to end on.

Don’t Stand So Close To Me – the Police

Could You Be Loved – Bob Marley and the Wailers

Echo Beach – Martha and the Muffins

Mirror in the Bathroom – the Beat

Another One Bites the Dust – Queen

Use It Up and Wear It Out – Odyssey

The Tide Is High – Blondie

The Winner Takes It All – Abba

In 1980 people were still listening to the Police, Blondie and the Jam. There’s a lot of reggae in this programme (and surprisingly little reggae in the sixties and seventies programmes). There was a mod revival in the early eighties.

One of the news stories in the last edition of 25 Years of Rock was the election of Abel Muzorewa of prime minister of Rhodesia. In 1980 Rhodesia formally became Zimbabwe. The new decade saw the start of another new era in American politics. One of the most memorable news stories in Britain was the Iranian Embassy siege. The assassinated Archbishop Romero was in the news again in 2018 when he was made a saint.

The biggest new story in pop music in 1980 was the murder of John Lennon, and the programme includes some extracts from an interview he did for Radio 1 with Andy Peebles just days before he died. But the programme doesn’t end with the death of John Lennon, instead it plays out with Stop the Cavalry by Jona Lewie.

Once in a Lifetime – Talking Heads

In the Air Tonight – Phil Collins

Under Pressure – Queen and David Bowie

Start Me Up – the Rolling Stones

Prince Charming – Adam and the Ants

Being With You – Smokey Robinson

Can You Feel It? – the Jacksons

Making Your Mind Up – Bucks Fizz

Don’t You Want Me – the Human League

Needless to say this programme begins with the inauguration of the new American president. The Iranian hostage crisis ended the same day. And the programme ends with Ronald Reagan wishing everyone a happy Christmas.

It was a new era for British politics with the foundation of the SDP. (Without the SDP there probably wouldn’t have been the Coalition government in the 2010s.) There’s no mention of the Rubik’s Cube.

And as with That Was the Week That Was in the early sixties, and Monty Python in the early seventies, so Not the Nine O’Clock News was the top satire show of the early eighties.

The early eighties were the tail end of the punk/new wave era. In 1981 there was the new romantics movement, which was a self-conscious attempt to be the next thing after punk. Electronic music was becoming more popular with Soft Cell and the Human League, and two-tone was still popular. The programme includes some of the artier records from Talking Heads and Laurie Anderson.

30 Years of Rock didn’t do Adam and the Ants justice considering how big they were in 1980-81. Prince Charming neatly segues into the Royal Wedding, the most remembered event of the year, and Ghost Town by the Specials is played over news of the riots that took place in Britain during the summer of 1981, and they include the wind blowing at the end of the record.

A Town Called Malice – the Jam

Love Plus One – Haircut One Hundred

Prince Andrew goes on holiday in Mustique with Koo Stark

The Look of Love – ABC

Living on the Ceiling – Blancmange

Save a Prayer – Duran Duran

Eye of the Tiger – Survivor

It Started With a Kiss – Hot Chocolate

Do You Really Want to Hurt Me? – Culture Club

Young Guns Go For It – Wham!

In Britain 1982 is remembered as the year of the Falklands War, Pope John Paul II’s visit to Britain, and the birth of Prince William (the only royal birth in the series). In fact most of the news stories are British stories. The 1955 and 1964 programmes included the start of ITV and BBC2, so it’s surprising that the 1982 programme didn’t include the launch of Channel 4.

1982-83 was when what most people think of eighties style really came in. The pop music scene was once again moving from rock to pop with the arrival of groups such as Culture Clubs and Wham. Blancmange were a forerunner of the indie groups of the later eighties, and Dexys Midnight Runners provided the summer’s biggest hit.

Incidentally the version of the theme from Fame which got to number one in 1982, and the version featured in this programme, is Irene Cara’s recording from the original 1980 film, and not the one used in the 1982 tv series. Although Irene Cara’s version was released as a result of the hit tv series.

Every Breath You Take – the Police

Is There Something I Should Know – Duran Duran

Stern magazine publishes Hitler Diaries, which later turn out to be a hoax

Undercover of the Night – the Rolling Stones

Cecil Parkinson resigns from cabinet when his secretary, Sarah Keays, reveals she is pregnant with his child

Wherever I Lay My Hat – Paul Young

Britain has hottest July of the century

Down Under – Men at Work

Only You – the Flying Pickets

Sweet Dreams Are Made of This – the Eurythmics

Tracey Ullman as Roz on Three of a Kind

What better way to start off a look at the year 1983 than U2’s New Year’s Day? There’s a lengthy couple of minutes with no music when they look at the 1983 general election. In 1983 it was predicted that compact discs would make vinyl obsolete, but vinyl made a comeback in the twenty-first century.

The Hitler Diaries hoax was still remembered in 1985, but is largely forgotten now, so these last five editions of 30 Years of Rock are more useful now than they were when they were originally broadcast.

Since these programmes were broadcast the music has become nostalgia fodder. The last new story is about the boom in British pop music. (This was the year that saw the start of the Now That’s What I Call Music albums.) We don’t hear the Thompson Twins, Thomas Dolby or Billy Idol, but we do hear Culture Club and Duran Duran. Duran Duran and Spandau Ballet were associated with the new romantics craze, but by 1983 had gone for a more mainstream sound.

As well as the new groups acts who’d been big since the sixties and seventies, such as the Rolling Stones, Elton John and David Bowie, were still having hits, and Jonathan King’s review of Michael Jackson’s performance of Billie Jean is what 30 Years of Rock is about.

Oddly enough this is the only edition of the series in Radio 6’s repeat run to include the preview of the next programme.

Relax banned by the BBC. Interview with Trevor Horn.

Prince Charles reads The Old Man of Lochnagar on Jackanory. Interview with viewers.

I Fell For You – Chaka Khan

What’s Love Got to Do With It? – Tina Turner

Your Love Is King – Sade

I Just Called To Say I Love You – Stevie Wonder

Unsuccessful attempt to get Umaru Dikko back to Nigeria

Wouldn’t It Be Good? – Nik Kershaw

Everything Must Change – Paul Young

Do They Know It’s Christmas? becomes all time best selling single. Various quotes from the past thirty years

One of the main stories in the last programme was the miners’ strike which was still going on in 1985. One of the main stories throughout the whole series was the Cold War, and in 1984 the Soviet Union led a boycott of the Los Angeles Olympics following the United States’ boycott of the Moscow Olympics. As well as major stories such as the assassination of Indira Ghandi and the Brighton bombing, they managed to find room for Prince Charles reading his own book on Jackanory.

The programme makers managed to pick out two new acts who would still be big many years later, Madonna and Prince. Just as the 1969 and 1977 programmes included the previously banned Je t’Amie and God Save the Queen, so the 1984 programme included the previously banned Relax. (Record label founder Paul Morley is now a well known tv presenter.) And Pete Townsend remembers some of the rock stars who died during the last thirty years.

Criminally the Smiths were ignored.

There is one more record which deserves a special mention. As with the original twenty-five part series, 30 Years of Rock ended with the last number one record of the previous year. (It’s tempting to think that Radio 1 decided to do the updated series because of this record.) The last news story in 25 Years of Rock was the Ayatollah banning western pop music, but the thirty part series ends on a more positive note, with pop music being used for some good.

The last news story is Michael Buerk’s report of the Ethiopian famine which prompted Bob Geldof and Midge Ure to write Do They Know It’s Christmas? and form Band Aid. Band Aid led onto Live Aid, and in fact 30 Years of Rock had to come off the air for one week to make way for Live Aid. (The inclusion of Drive by the Cars suggests that the programme was completed after Live Aid.)

30 Years of Rock ends with the best selling British single with everyone on it, and they couldn’t have had a better place to end on.