Skip to content
HomeThe Champions – Get Me Out Of Here! 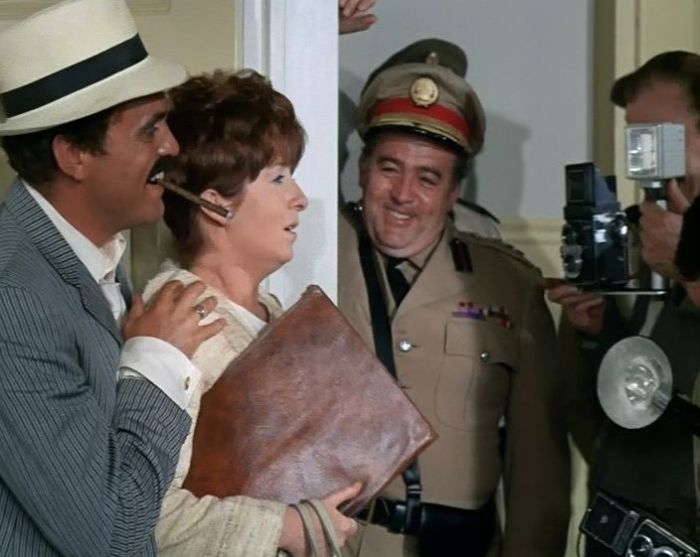 Professor Anna Maria Martes (Frances Cuka), on a visit back to her homeland (the tiny island of San Dios), is placed under house arrest by the corrupt ruling junta. They want to take the credit for her discoveries and intend to keep her a prisoner on the island. The Champions have other ideas though …

We’re back on a train for the post credits superpower demonstration (clearly this one was recorded at the same time as Richard’s rather rude crossword completing). Today it’s Sharron who gets a chance to shine – foiling a respectable looking sneak thief by using her powers to see in the dark. Oh, and she looks gorgeous in this scene.

There’s something a little off-putting about the way that our three heroes refer to Tremayne by his surname. Why don’t they call him sir?

This episode has the sort of cast list which gets my pulse racing (Philip Madoc, Ronald Radd, Eric Pohlmann). My joy at seeing Madoc was slightly tempered by his silly wig and moustache but the fact he’s been dubbed is a much more serious problem. In many ways his voice was his fortune – robbed of that, he’s incredibly diminished. Madoc plays Angel Martes, the former husband of Anna Maria. It’s a decent comic role which is totally destroyed by the dubbing.

Luckily Radd was permitted to keep his own voice and so oozes silky villainy as the Commandante. A wonderful actor who died far too young (amazingly he was only in his late thirties when this episode was filmed) I could watch him do his thing all day.

Pohlmann was another one of those incredibly dependable actors. He’s the very model of solid respectability as the Minister – a man with a thin veneer of affability masking something very nasty indeed. The Minister’s meeting with Anna Maria is short, but not at all sweet.

We’re back in one of those fictitious South American counties so beloved of ITC film series. For the location work this means that a few exotic plants have been dotted outside various London buildings. It’s as convincing as ever (i.e. not very).

Craig meets with Anna Maria in her apartment. He’s clever enough to realise that the room is bugged, but doesn’t stop to consider that there may be a hidden camera as well. Tsk! That’s a little careless.

This moment serves not only to diminish Craig’s aura as a top agent but it’s also a slightly clumsy way of placing Anna Maria under heavy guard which makes it much harder for the Champions to spring her. She’s now in a building known locally as “the butcher’s shop”. This conjures up many disturbing images although you won’t be surprised to learn that anything nasty happens firmly off-screen.

It may be irksome when one of the regulars takes a week off, but it’s quite understandable as finding interesting things for three people to do can be problematic. And so it proves here – they all get a decent share of the action, but none of them do anything that really stands out.

There are a few plot dead-ends as well. Sharron phones Angel Martes and it seems that their interaction will be key, but nothing really comes of this.

Get Me Out Of Here! is watchable but not top drawer. The guest roles aren’t too substantial, although Ronald Radd gets the most to do (Philip Madoc’s dubbing is a major minus point though). Frances Cuka feels a little colourless as Anna Maria, but this may just be the way her role was underwritten. The final shoot out looks very unconvincing – The Champions was never a gritty sort of ITC series, but the direction here is especially off-kilter.

Three out of five is a generous score for a somewhat flawed episode. 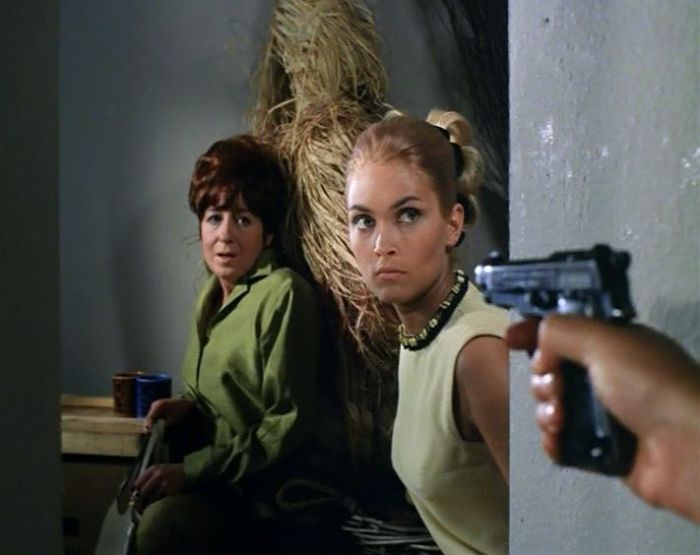 2 thoughts on “The Champions – Get Me Out Of Here!”