Skip to content
HomeDoctor Who – The Chase. Part Three – Flight Through Eternity 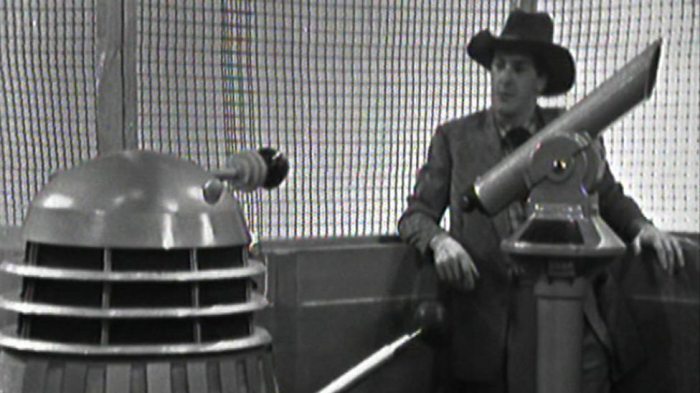 The opening scene in the Daleks’ time machine looks pretty impressive. The set (designed by Raymond Cusick) feels substantial and has some groovy 1960’s embellishments such as the spinning wall designs. It’s also populated with quite a few Daleks – true, at least one is a cardboard cutout and others are cannibalised from the Peter Cushing movie, but it all helps to create the impression of a decent fighting force.

It’s therefore a pity that one of the Daleks is rather hesitant (“umm err”) which rather dissipates this good start. This wasn’t scripted and seems to have been a gag dropped in during rehearsals. It’s another moment which chips away at the invulnerability of the Daleks, although there’s worse to come ….

The TARDIS next drops our intrepid time-travellers off at the top of the Empire State Building. This is the cue for a number of interesting American accents. The first comes from Arne Gordon playing the guide. If you’re bored with the story at this point you can always amuse yourself by counting the number of times he says “err”. Gordon had also played Hrostar in The Web Planet, although you’d be forgiven for not realising this. There’s no excessive hand movements or mutterings of “Zaaaarrbbiiii” for example.

Next up is hillbilly Morton Dill, played by Peter Purves. As is well known, Purves’ small role so impressed Verity Lambert that she offered him the role of series regular Steven Taylor a few weeks later. Quite what she liked about Morton Dill is a bit of a mystery to me as Purves overplays horribly, although you could argue that The Chase is hardly the story where naturalistic acting is required.

I’d assume it must have been Purves’ off-camera persona which convinced her that he’d work well with Hartnell (and she was quite right as he would provide Hartnell with solid support during the next year or so).

Dill’s brief run-in with the Daleks is another instructive moment – he’s convulsed with laughter at their appearance and refuses to take them seriously. Had he then been blasted into nothingness it would have reminded the audience about the power of the Daleks (to coin a phrase). This doesn’t happen, so Skaro’s finest remain something of a joke.

Mercifully, we don’t spend too long in New York. The TARDIS is on the move again, landing the Doctor and his friends on an old-fashioned sailing ship. As with the Empire State Building sequence, it’s over and done with so quickly that only very superficial characterisation can be established.

A gag from The Romans – Ian is knocked out by one of his crewmates, this time Vicki – is reused and once again the Doctor leaves before the Daleks arrive. But whereas they couldn’t be bothered to deal with Morton Dill, here they’re in a much more bloodthirsty move and elect to exterminate all the crew.

This does give us some nicely shot film sequences, showing hapless crew members jumping from the ship into the sea (including, rather disturbingly, a mother and her child). As with the events in the previous episode, you have to wonder why the Doctor never seems to worry that almost everywhere he’s visiting is then obliterated by the Daleks. This is a throwback to the self-centered Doctor of season one, where his survival (and that of his companions) was his sole interest.

The reveal that the ship was the Mary Celeste is a rather groanworthy one, but at least it gives us an explanation for this age-old mystery. The crew and passengers were exterminated by the Daleks! It’s as good a solution as any other.

3 thoughts on “Doctor Who – The Chase. Part Three – Flight Through Eternity”