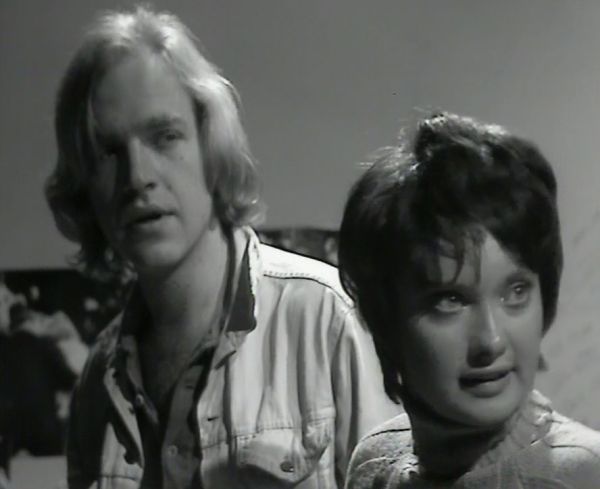 Today’s episode sees Tom Chadbon and Nicola Pagett play a couple of student revolutionaries. Sean (Chadbon) is the type to crack heads, smash windows and apologise (or not) later whilst Margot (Pagett) is a more peace-loving type, but equally keen that the voice of youth should be heard on the streets.

To begin with, it looks like the episode will revolve around Special Branch’s attempts to keep them under control, but the plot soon changes direction after it’s revealed that a new recruit to the cause, Peter Harris (Andrew Bradford), is the son of a senior Special Branch detective ….

As usual, Det. Supt. Eden (Wensley Pithey) stomps about the office in a thoroughly bad mood whilst Det. Chief Insp. Jordan (Derren Nesbitt) entertains himself by giving the hapless Det. Con. Morrissey (Keith Washington) a hard time. And Morrisey is being particularly hapless today, faffing around with a typewriter much to Jordan’s disdain.

Today Morrisey seems to be mainly used for comic relief, for example later on he gets into a discussion with Eden about pipes and tobacco (ending when Eden pinches some of Morrisey’s tobacco!)

Elsewhere, Morris Perry is his usual polite and deadly self as Charles Moxon, the liaison between Special Branch and the security forces, whilst the likes of John Levene and Frances Tomelty can be seen lurking in the background.

Was Harris genuinely interested in student power or was he simply along for the ride (and a relationship with Margot?). His true motivations aren’t made clear, although by the end of the episode he’s become estranged not only from his parents (decent types, keen to maintain the status quo) but also from his new revolutionary pals (who are convinced that he’s a police informer).

The actions of the Special Branch (raiding Margot’s home and forcing her and her friends to submit to humiliating personal searches) convinces both Margot and Sean that the innocent Harris has sold them out. Since Morrisey and Det. Sgt. Helen Webb (Jennifer Wilson) don’t seem to find anything, was the whole exercise designed simply to create this impression?

If so, it worked – although the unfortunate side-effect is that the students, already convinced that all police are fascist pigs, now have their prejudices confirmed ….

Complete with a flower in his buttonhole and a spiv moustache, Liski attempts to radiate menace, but you know (even though we’re just three episodes in) that the mild-mannered Mr Reeder will be more than a match for him.

Melia, as you might expect, gives an entertaining performance as does Hugh Burden (their sparring relationship is the episode’s highlight). A number of familiar faces pass through – including Harry Towb, Hildegard Neil and Pauline Delaney. Towb has a cough and a spit role as Sullivan, a low friend of Liski, whilst Hildegard Neil has the slightly more substantial part of Marylou Plessy. Neil is delightfully vampy as the wife of a forger sent to prison by Reeder. She vows vengeance, but ends up in the clink herself, once again thanks to Reeder.

Pauline Delaney sports an outrageous French accent as Madame Lemaire, although there’s a reason for this (she’s only a faux Frenchwoman). She attempts – on Liski’s instructions – to lure Reeder into an illegal drinking and gambling den, but Reeder (of course) remains several steps ahead. I do like the fact that the gambling club only seems to play one record  (the theme to The Mind of Mr J.G. Reeder).

All the threads of the convoluted plot tie themselves together in the end, with the result that the unfortunate Liski will be out of action for a considerable amount of time, thanks to the mamba-like Mr Reeder.

One rather odd thing about the episode is that several times a newspaper story (concerning a jewel robbery) is prominently displayed on screen long enough to make it clear that all the words, apart from the headline, are gibberish. Hard to believe it was a genuine mistake, so presumably it was some sort of obscure in-joke.