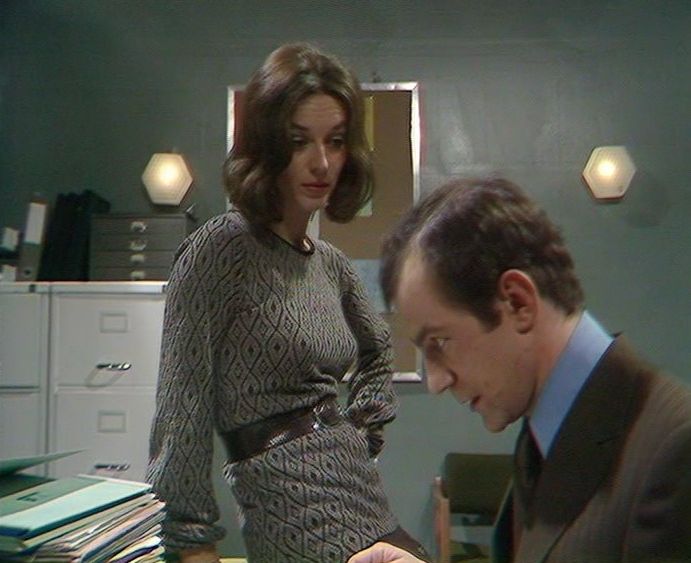 Three batches of platinum, worth thousands, have been stolen from Nitrosyn Chemicals over the past ten months. Watt decides to send a man in undercover to root through their paperwork, and his unexpected choice is Jackson ….

Since he’s desk-bound and decidedly non-operational most of the time, there’s considerable novelty value in witnessing a plain-clothes Jackson working a case from the sharp end.  And John Elliot’s script certainly gives David Allister much more scope than usual.

Jackson tends to be presented as a humourless, cold and logical man.  But with Company Business we see quite a different character – one who’s able to interact with others by displaying humour and charm.  He catches the eye of a secretary at the factory, Ruth Kemp (Wendy Gifford), and it’s plain that she’s keen to get to know him better.  Jackson demurs though – is this because he’s afraid of an emotional attachment or is he simply concentrating on the job in hand?

Only the managing director, Fisher (Donald Douglas), knows the real reason for Jackson’s presence (everybody else thinks he’s a time and motion expert).  Jackson expresses a wish to meet the senior staff in an informal setting and Fisher tells him that it couldn’t be easier – one of Nitrosyn’s key personnel, Calwell (William Dexter) is throwing a party and he adds Jackson to the invite list.

Calwell immediately catches Jackson’s attention.  Both he and his wife Linda (Penelope Lee) are charming, but Jackson immediately senses something slightly off about him.  And after he visits Calwell’s boat, his suspicions harden into certainty.  The boat has had a considerable amount of work undertaken recently – where has the money come from?

For Jackson it’s obvious, Calwell is the thief. He tells this to Donald, who’s acting as his contact.  And he also explains the reason why his colleagues don’t suspect him.  “Oh, they’re all on the old boy net, the old school club, it wouldn’t be cricket. They make me a bit sick.”

Donald is posing as Jackson’s girlfriend, something which she’s not terribly keen about at all!  This is made obvious when they meet in the hotel bar for a debrief.  She’s slightly miffed at being kept waiting and rather flinches when Jackson, playing the part of the dutiful boyfriend with gusto, attempts to kiss her.  But they manage to get a good meal (on expenses) so it’s not all bad.

If Donald’s a little exasperated with Jackson then so is Watt.  Jackson’s theory is interesting, but it’s just that – a theory.  Watt’s irritated that Jackson’s not checking the paper trail like he was supposed to, instead he’s off playing detective.  It’s been hammered home time and again across numerous stories that Jackson’s not a detective – we’ve seen how others, especially Evans and Barlow, tend to treat him with veiled (and not so veiled) contempt.  To them he’s a penpusher, plain and simple.

Watt isn’t quite so prejudiced, but he’s not best pleased that Jackson seems to be stringing this job out.  He’s especially horrified at the thought that Jackson and Donald might be enjoying a slap-up meal at the taxpayers expense every week!  So next time, Watt takes Donald’s place and can’t help but start with a dig about food.  “I surprised you didn’t choose the Chinese joint up the road. That’s very plushy.”

There’s further wonderfully deadpan lines delivered so well by Frank Windsor after Jackson tells Watt that he’s stood up a beautiful girl, Ruth, in order to be here.  Watt’s sympathy is in rather short supply.  “And I’m missing me hot dinner, so let’s get on.”

The thefts are, of course, not the point of the story.  Company Business is concerned with Sergeant Jackson’s skills, or otherwise, as an investigating policeman.  His abilities as an administrator and organiser are second to none, but does he have the instinct to be able to tell the guilty from the innocent?

The group of regulars in this one is quite small.  Hawkins doesn’t have a great deal to do, except react to Watt, leaving Jackson, Donald and Watt as the main players.  As I’ve said, the chance to see Jackson as a more rounded character is a welcome rarity and Donald and Watt are both well served with some of the sharper lines in the script.  Things work out well in the end, although it’ll come as no surprise to learn that the dour Watt is quick to tell Jackson that one job doesn’t make him a detective.