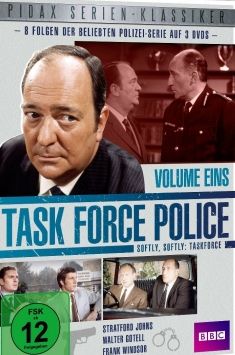 The German company Pidax have just released Task Force Police – Volume One.  This contains eight episodes from series three, as below –

The reason why some episodes have been omitted could be because German language tracks aren’t available.  But the good news is that unlike Pidax’s Maigret DVDs, all the episodes here do feature English language tracks.

I’ve heard that Simply plan to release series two next year, so they may get round to these episodes in due course.  But if you don’t want to wait, then the Pidax release is there.

Thanks to Berthold Deutschmann for bringing this to my attention as well as providing the screencaps below. Copyright in these images remains with the BBC. 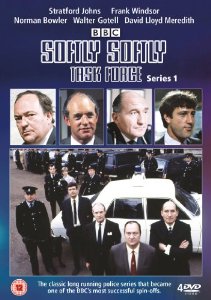 Stratford Johns (Barlow), Frank Windsor (Watt) and Norman Bowler (Hawkins) were the three characters from Softly Softly who crossed over into the new series. They were joined by a host of new faces, including Walter Gotell as Chief Constable Cullen, Terence Rigby as PC Snow, David Lloyd Meredith as Sgt Bob Evans and Susan Tebbs as DC Donald.

Arrival sees Charlie Barlow take up his new position as DCS of the newly formed Task Force based in Thamesford. Whilst most of the running time is taken up with Barlow investigating his surroundings there is a secondary story about a missing child with a bleak conclusion.

Next up is Exercise which sees John Watt arrive to lead Task Force 1. Shortly after his arrival the squad are deployed to investigate a stabbing. There’s a nice guest turn from Barry Jackson in this one and some needle between Barlow and Watt.

The first few episodes are concerned with the Task Force team and the crimes are very much secondary. The Spoilt Ones is a change of pace as the miscreants are the focus (lovely, grimy, performance by John Bennett).

Stratford Johns is outstanding in To Protect the Innocent. Given the large cast, no one character dominates each episode, but each one where Barlow is centre-stage are highlights for me.

Any Other Night. The theft of a number of tyres from the police depot is an embarrassment. The fact it happens on New Years Eve is another irritation. A routine episode, but it has some good character moments.

The spectre of football hooliganism is tackled inThe Aggro Boy. A fascinating look at the run down state of British football in the late 60’s/early 70’s. Interesting time capsule.

Another hot topic of the time, union unrest, is tackled in the episode Standing Orders. Fairly routine stuff, enlivened by an early appearance from Katy Manning.

Another good turn from Stratford Johns in Private Mischief. A straightforward tale, but not without interest.

Open and Shut. It seems like a simple case, but first appearances can be deceptive. A station-based, procedural episode, this is a good character piece.

An undercover operation at the docks leads to the uncovering of an illegal immigrant ring in Sprats and Mackerels. Plenty of familiar faces in roles of varying sizes (Kenneth Cranham, Sally Geeson, Joe Gladwin, Christopher Benjamin).

Like Any Other Friday is one of the lesser episodes on this release. A blink-and-you’ll-miss-him appearance from Tom Baker is one of the few items of interest here.

Things immediately pick up with Power of the Press though. It’s another Barlow-centric episode with Stratford Johns once again on great form. And here he has an opponent of equal weight – Ronald Radd as the corrupt Councillor Whitaker. The original Hunter, opposite Edward Woodward in Callan, Radd was a quality actor and it’s a pleasure to see him in opposition to Johns. Probably the best episode of the first series.

Trust a Woman. Another good, but not spectacular, episode. A nice guest turn from Imogen Hassall is the highlight here.

The Hermit. A straightforward, but engaging, story about a gang of fraudsters preying on the elderly and vulnerable. Another very watchable episode.

The final episode of series 1 is Escort. Whilst it’s a bit of a runaround, it’s worth it for the last ten minutes or so.

Overall, this is a very good collection of episodes. There are a few lesser ones, but generally the hit rate is very high and the quality of the guest and regular casts make this a very enjoyable watch.

Whilst I would unreservedly recommend this series, there may still be uncorrected copies out there, so purchasers may wish to be wait until they have gone out of circulation. Simply did have an exchange program and if you do have a faulty release it might be worthwhile to contact them to see if it’s still running.

For the record, the address for returns was – Simply HE, FREEPOST RSYX-ERKC-CJJH, Ringwood, BH24 1HD.

Encoding issues apart, for anybody who enjoys British police drama from this era, SS:TF is well worth a look.