I loved 24 and I loved The West Wing, so what could be better than a series which mashes up the two? ABC seemed to agree, as they ordered an initial run of thirteen episodes (later expanded to twenty one) for the first season of Designated Survivor without going down the pilot route.

Partly this was due to the draw of Kiefer Sutherland.  As Thomas Kirkman, a lowly American politician suddenly thrust into the role of President after everyone else in the line of succession is murdered in a brutal terrorist attack, he’s a suitably solid anchor around which the rest of the characters revolve. As the second season opens, Kirkman is celebrating one year in the White House, but as might be expected things are far from plain sailing.  The hunt for Patrick Lloyd (Terry Serpico), the man responsible for the attack, continues whilst Kirkman finds himself juggling a host of other problems, both domestic and foreign.

As the role of Tom Kirkman is somewhat removed from that of Jack Bauer, other (younger) faces are to be found in the field.  Rather improbably, Hannah Wells (Maggie Q) appears to be the sole FBI agent on Lloyd’s tail. You’d have assumed that the FBI might have been able to run to supplying a few more bodies on the ground ….

No matter, as in the debut episode of season two (One Year In) Hannah teams up with  Damian Rennett (Ben Lawson), an MI6 agent who also has an interest in Lloyd. Exactly how Rennett is able to operate so freely on American soil is a mystery which remains unanswered (it’s also slightly mysterious that they cast an Australian actor in the role).  You may not be surprised to learn that the initial wariness which exists between the pair gradually softens as they find themselves thrust together in one hair-raising escapade after another.

Coming back to the point of fake accents, since the British actress Natascha McElhone adopted an American accent to play Kirkman’s wife, Alex, I daresay everything balanced out over time.  A regular during season one,  McElhone elected to jump ship during season two to join The First, which was the perfect excuse to create a dramatic exit for her.

Most of the cast from season one carried over to this run, but there were a few new additions such as Paulo Costanzo, who plays Lyor Boone, the White House’s Political Director. A deeply skilled political operative, albeit one with few interpersonal skills, he adds a touch of colour and humour to the occasionally dour West Wing scenes.

Designated Survivor has something of a problem hanging onto showrunners. Amy Harris was replaced by Jon Harmon Feldman before production began on the first season whilst Jeff Melvoin took over from Feldman about halfway through the debut season. There was more stability during this second run, as Keith Eisner remained in place throughout, but his decision to not to remain for the proposed third year was one of the reasons why ABC pulled the plug following the season two cliffhanger. A drop off in ratings also didn’t help, but healthy foreign sales helps to explain why Netflix decided to pick it up for a ten episode S3.

There are certainly many things to love about the series, even if at times it rather falls uneasily between two stools. It lacks the highly crafted political nuances of Sorkin-era West Wing and it doesn’t fully convince as a high-octane thriller like 24.  But across the 22 episodes of this second season there are enough strong episodes to suggest that – with some tweaks – the formula could be perfected.  Time will tell whether the Netflix pick up will be the start of a new lease of life for the series.

Designated Survivor – The Complete Second Season is released on DVD by eOne on the 1st of October 2018. 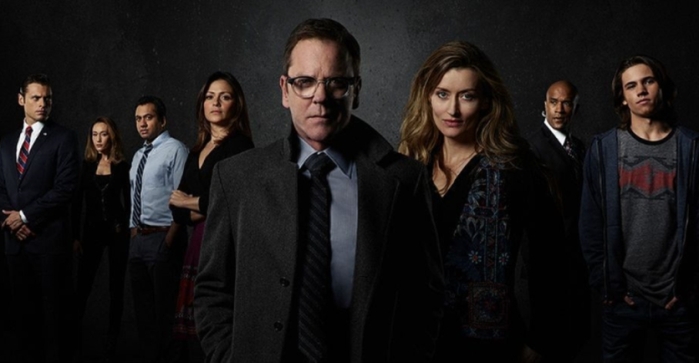 In the bleak outskirts of Northern Ontario, maverick detective John Cardinal (Billy Campbell) is assigned to investigate the murder of thirteen-year old Katie Pine.  Cardinal has a history with this case – when Katie was still classed as a missing person he was removed from that investigation (due to his dogged determination that she had been murdered).

Although he was eventually proved correct, there’s little sense of victory on his part as together with a new partner, Lisa Delorme (Karine Vanasse), they face the possibility that a serial killer may be at work.  But their work is far from smooth, especially since Lisa is pursuing an agenda of her own ….

Cardinal premiered on CTV (in English) and Super Écran (in French) during early 2017. It’s based on the 2001 novel by Giles Blunt, Forty Words for Sorrow, which won the Crime Writer’s Association Silver Dagger that year.

No time is wasted in establishing the tone of the series. The setting – a bleak, remote, icy wilderness – informs the performances, which are restrained and undemonstrative. Cardinal himself is an archetypal creation – an obsessive, driven man who is prepared to sacrifice everything in order to find the murderer. Billy Campbell’s dialled-down performance (often Cardinal barely speaks above a whisper) is pitched at just the right level.

A male/female detective partnership is something that’s been seen many times before, so Cardinal needs to be able to bring something new to the table. To begin with, the pair operate along conventional lines. A colleague gives Lisa two important pieces of advice about how to deal with Cardinal. “Don’t be a yes man. Never disagree with him”.

Cardinal propounds his theory that Katie was murdered by a serial killer. If this is so, argues Lisa, then why haven’t they found any other bodies? These early skirmishes help to delineate their characters, but things aren’t as straightforward as they first seem. Lisa has been sent, in part, to investigate Cardinal (it’s believed that he has been receiving corrupt payoffs from Corbett, a local drug lord) and her dual investigative roles help to create a pleasing sense of tension which runs across the serial.

With its icy setting, moody tracking shots of desolate wastelands and ominous incidental music, Cardinal taps into the current vogue for Nordic Noir. Cardinal himself, an isolated figure with a broken marriage, fits into this bleak landscape well. He may believe that they have a repeater on their hands, but nobody else is convinced. Although you sense that he’s not too bothered about this – like any true maverick he’s always prepared to strike out on his own.

Perhaps fittingly, given the setting, Cardinal is content to move at a glacial pace – a high-octane thriller series it most definitely isn’t.  Instead, as each episode proceeds the various plot threads are teased out little by little.  Episode three – Edie and Eric – is especially noteworthy, as it introduces us to the titular characters (played by Allie MacDonald and Brendan Fletcher) who are key to solving the case.

Although it’s true to say that Cardinal doesn’t do anything terribly original (those especially familiar with the genre will probably spot some of the twists before they happen) it’s still an engrossing watch which quickly draws the viewer in.  The running time (six episodes of approx. 42 minutes each) feels about right – as it allows time for the mystery to develop but is still a short enough run to ensure that the story isn’t too drawn out.  Recommended.

Cardinal – The Complete First Season is released by eOne on the 2nd of October 2017.