The third of three pre-Colditz episodes, this one centres around the travails of Lt. Dick Player (Christopher Neame). Having already followed an army officer (Pat) and a member of the air force (Simon) it makes sense not to leave the navy out, which is where Lt Player comes in.

Washed ashore in France, Player is taken to a nearby hospital. The French doctor who deals with him is either on his side or rather incompetent (he tells a keen as mustard German officer that Player won’t be in a fit state to be interviewed for at least two days – but as soon as the pair leave, Player opens his eyes and begins to plan his escape).

As Player moves through the hospital, there’s a vague element of farce to his frantic attempts to pinch some clothes (rather reminiscent of Jon Pertwee’s debut Doctor Who story). For example, he steals some trousers (much to the indignant chagrin of their owner) and, when looking for shoes, initially comes across a nice ladies pair.

The episode boasts some well played cameo performances. The first comes from Alistair Meldrum as a chatty German soldier who runs into the absconding Player. Next up is David Garfield as Diels (he’s the sort of actor – rather like Michael Sheard – who portrays cold German officers with casual ease).

Recaptured and forced to admit his identity, Player is interrogated by two Gestapo officers (played by Nigel Stock and Terrence Hardiman). Their scenes together are a highlight of the episode – Stock’s character (the senior of the two) appears to be full of bluster whilst the other (Hardiman) is seemingly more friendly. But you must always be wary of a friendly Gestapo officer ….

Hardiman, of course, would later appear in another Glaister series (Secret Army) playing a not totally dissimilar character. Neame would also be a Secret Army regular for a while (his character was written out at the end of series one).

Player is then released into the care of an old friend, Paul Von Eissinger (John Quentin). That Player has German friends (and indeed, can speak the language like a native) might explain why he’s not immediately slung into a prison camp.

Von Eissinger, like his friend, enjoys a privileged background and professes to be no friend of the Nazis. He paints a compelling picture – Hitler removed from power and an alliance forged between the new Germany and Britain (together they could rule the world). Quentin’s clipped, mannered performance is a slightly odd one, but his dueling dialogue scenes with Neame are still absorbing.

The viewer knows that Player’s brief stint of luxurious living with Von Eissinger will only be transitory, as the price on offer for his freedom is just too great for him to pay. The episode ends with his arrival at Colditz, where he meets some familiar faces (Pat, Simon) and some others that the viewer will get to know during the next few weeks.

These first three episodes have been much more than just padding, but it’s hard to deny that the pulse quickens just a little when we pass through the gates of Oflag IV-C for the first time … 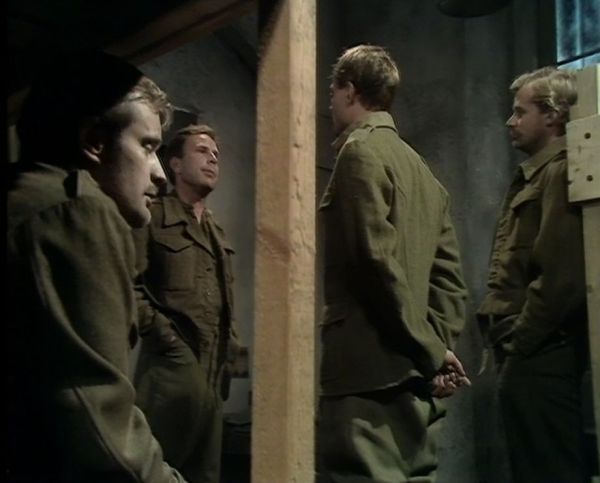 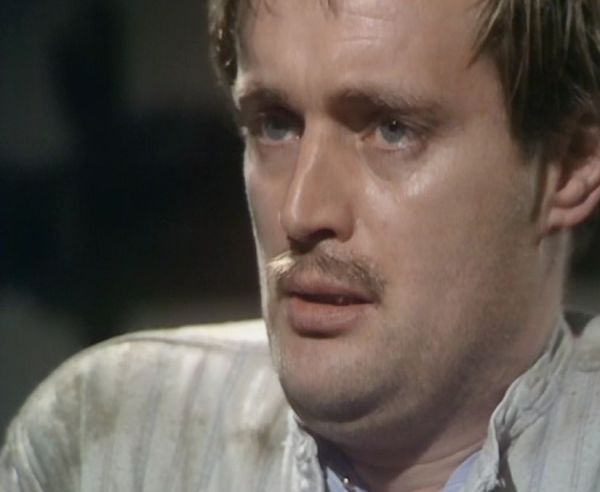 Like the first episode, Missing, Presumed Dead introduces us to a single character – today it’s Flt. Lt. Simon Carter (David McCallum). But unlike Pat, we get to see something of Simon’s home life before he becomes a prisoner of the Germans.

Simon seems to enjoy giving everyone a hard time. If he’s not bawling out the ground crew then he’s crossing swords with his boss, Wing Commander Cannock (Peter Halliday). Simon might have a point – sloppy maintenance work could endanger the whole crew – but equally he may just be a perfectionist asking for the impossible.

Things are also sticky on the domestic front. Recently married to Cathy (Joanna David), he’s very icy with her (employing emotional blackmail with no compunction). About the only person he’s civil to is her father, Devenish (Noel Johnson). Devenish is clearly very well off (his well stocked wine cellar is testament to that).

Simon’s blunt working-class attitude should grate against Devenish’s upper-class sensibility, but they seem to have a relationship of perfect equanimity (although the pair only share a brief few moments of screentime). It’s a nice turn from Johnson though, managing to suggest that there’s a lot more to Devenish than his surface persona of a distracted wine snob.

Later that day Simon is shot down over Germany. His attempts to evade capture are reasonably interesting, but this section is mostly enlivened by the people he meets along the way, such as a friendly priest (played by Joe Dunlop) and a decidedly unfriendly Gestapo officer (Michael Wynne).

Eventually he winds up at a prisoner of war camp run by Kommandant Esslin (Oscar Quitak). It’s always entertaining, when watching a series produced by Gerard Glaister, to spot the actors who had either appeared in a previous production of his or would go on to work with him in the future. For example, Quitak later played Joseph Mengele in Kessler, the Secret Army spin-off, as well as Richard Shellet in Howards’ Way.

Today, Quitak is shaven-headed and like Michael Sheard in the previous episode has no trouble in playing an implacable German Kommandant.

Another good cameo performance comes from the always dependable John Ringham as Major Dalby. The Senior British Officer at Simon’s current camp, whilst he may initially appear to be a little Blimpish, he’s actually quite happy to assist Simon in escaping. The only problem is that Simon will have to wait his turn (no half-baked attempts which only lead to instant recapture will be tolerated).

When everybody ends up at Colditz this sort of rule is understood and (generally) obeyed. But Simon simply can’t stomach the fact that he may have to remain at the camp for a year or so until his name goes to the top of the list. So it won’t surprise you to learn what happens ….

Recaptured after an opportunistic escape attempt, there’s a sense of deja vu when Kommandant Esslin delights in telling Simon that he’s being sent to a very special camp – Colditz.

The opening few minutes of this debut episode are interesting. It features a selection of black and white archive footage, over which is dubbed Churchill’s defiant post Dunkirk speeches. Only slowly (when Edward Hardwicke is spotted amongst the throng of captured British soldiers) does it become apparent that the original footage has been mixed with newly shot material, degraded into flickering black and white.

You have to tip the hat to a number of extras who gamely agreed to have their heads shaven (all part of the process for prisoners of the German system). Understandable that Hardwicke didn’t go through this, but it’s a shame that his bald cap is so incredibly unconvincing. Luckily he only has to wear it for a short time – the fact he swiftly regains a full head of hair serves as a handy indication that his time spent in this camp can be measured in months.

Michael Sheard was born to play nasty Nazis, meaning that it’s no stretch for him to take on the mantle of the Kommandant. It’s just a shame that he didn’t have more to do.

Pat Grant (Hardwicke) quickly falls in with a group of fellow prisoners who are equally dedicated to escaping as he is. Mark McManus (as Lt. Cameron) is instantly recognisable but it took me a little longer to pin down where I knew Julian Fox (playing Capt. Freddy Townsend) from. Eventually the penny dropped – a late era Jon Pertwee Dalek story ….

John Golightly (Capt. Ian Masters) gives a nice performance. Pat’s first point of contact in the camp, Masters initially seems to be resigned to his fate – content simply to sit and play cards whilst the news of the war from the Allied side goes from bad to worse. But once Pat mentions that he plans to escape, Masters springs into action with considerable zeal.

There’s a lot packed into this episode – it features multiple escape plans, which culminate with Pat and some of the others tasting freedom (albeit only briefly). Pat’s recapture means that he’s earned entry to a very special prison camp, one which is supposed to be escape proof. Colditz …. 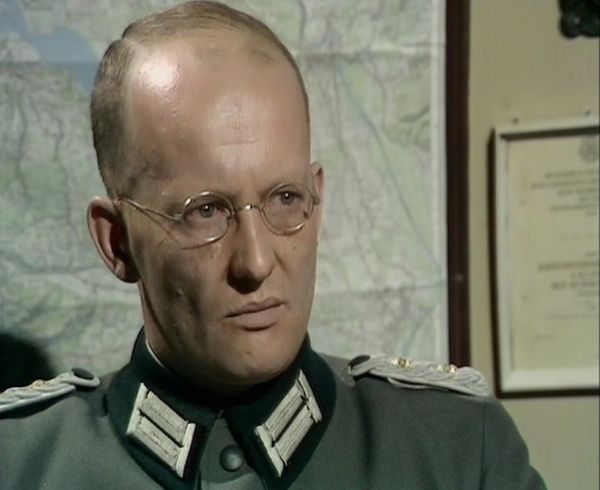 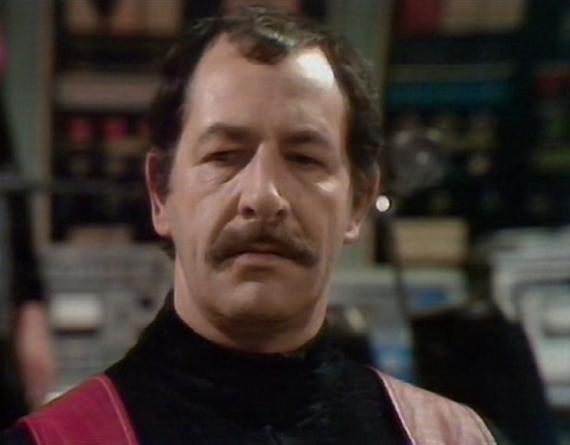 I was sorry to hear about the recent death of Bernard Kay.  He had a lengthy career with some notable film appearances (such as Doctor Zhivago & Sinbad and the Eye of the Tiger) but many of his best performances were on television.

And one of his finest small-screen appearances must be the Tweedledum episode of Colditz (transmitted on the 21st of December 1972).  Michael Bryant played Wing Commander George Marsh, who decided to fake madness in order to get released from Colditz and gain repatriation to Britain.  Kay was Hartwig, the German soldier assigned to watch him.  Initially, Hartwig was convinced that Marsh was a fake and sought to prove this by various humiliating means.  Eventually though, he’s convinced and it’s Kay’s compassion that moved the story to another level.

Bernard Kay would become a familiar screen presence for decades, appearing in many popular series such as Out of the Unknown, Redcap, No Hiding Place, The Baron, Adam Adamant Lives!, Softly Softly, The Champions, Budgie, Z Cars, The Sweeney, Space 1999, Survivors, The Professionals, Grange Hill, Dick Turpin, Tales of the Unexpected, The Bill, Juliet Bravo, Remington Steele, London’s Burning, Coronation Street, Jonathan Creek, Foyle’s War and TV Burp amongst many, many others.

He also made four appearances in Doctor Who, between 1964 and 1971.  The first, The Dalek Invasion of Earth was opposite William Hartnell and he played Tyler – a member of the Earth resistance fighting the Daleks.  A few months later he returned to the series, as Saladin in David Whitaker’s The Crusade.

Since Kay (along with several other actors) was browned-up in The Crusade, this might mean that some people would view the story today as politically incorrect, but Whitaker’s script certainly wasn’t.  Kay’s Saladin isn’t a monster – indeed he seems to be just as rational as Julian Glover’s Richard the Lionheart (possibly more so).  As Richard blusters, Saladin is content to remain cold and logical.  It’s Kay’s best Doctor Who performance.

A few years later, he played Inspector Crossland opposite Patrick Troughton’s Doctor in The Faceless Ones and would make his final appearance in the series in 1971.  Jon Pertwee was the Doctor at the time and whilst the story (Colony in Space) is a little dull, Kay was, as usual, very good – this time as Caldwell, a man who finds himself increasingly at odds with his IMC (Interplanetary Mining Company) colleagues.

Kay was born in Bolton in 1928, and following his National Service he trained to become an actor at the Old Vic Theatre School.  Although the majority of his work was either on television or film, he was no stranger to the Theatre.  One notable early performance was as Macbeth in the Nottingham Playhouse’s production of  1952.  When the actor playing Macbeth had to pull out, Kay stepped into the part – with only 24 hours to learn the role.

Bernard Kay was always somebody who spoke his mind – and this is demonstrated in these fascinating interviews, conduced by Toby Hadoke for his Who’s Round Project – Part One and Part Two.  At times painfully frank, they provide a good insight into the personality of a fine character actor.