Skip to content
HomePosts tagged 'last of the summer wine'

There’s no reason why Christmas specials have to be set at Christmas – even though most of them are. Roy Clarke, who established a mild anti-festive tone in his previous LOTSW festive special, has his (Christmas) cake and eats it in this one – there’s plenty of Christmas talk, even though the setting is late summer.

It’s always a little jarring to revisit these early episodes and witness our three heroes doing their own stunts. The sight of Sallis, Owen and Wilde indulging in a spot of plastic bag sledging is a joy though – especially since even the normally reserved Foggy seems to be enjoying himself for once.

It’s not long before Foggy’s normal character clicks back into gear though. Back at Clegg’s house he – with typically military precision – inflicts a slide-show on the other two. Neither are exactly delighted. Compo hopes that it’s not Foggy’s holiday snaps again whilst Clegg is slightly anxious, re his curtains (“I hate drawing my curtains during the daytime. Suppose the neighbours start sending flowers”).

Foggy’s pictures reveal a dismal picture of last Christmas – after taking Compo’s advice all their Christmas shopping was carried out on the 24th of December, with the result that they had no trimmings and a rather paltry Christmas dinner (a fish finger and a chip). But the attentive viewer will know that their previous Christmas as transmitted on television wasn’t like this at all, so clearly time in LOTSW land runs in a different way to the rest of the country.

Determined not to be caught napping a second time, Foggy decides the time is right to start their Christmas shopping (but finds that festive cards and treats are thin on the ground in August). Things get no better later on after he buys himself a bargain (100 Christmas trees for just £10). The Forestry Commission are having a summer sale you see.

It slowly dawns on Foggy that he’s been had (but then if you exchange money in the pub with someone called Big Eric, what do you expect?). Poor Foggy is eventually brought back to reality when the three trek over to see his purchases – since each tree is 100 ft high, they’re going to be a tad tricky to cut down ….

Brian Wilde rather drives this episode. I love Foggy’s wistful shake of the head when Compo asks him whether MI5 had attempted to recruit him. “I dropped hints that I was available when me time was up in the army. I watched for the postman every morning since, but nothing”. The final scene – which plays over the end credits – of Foggy left alone also rather tugs at the heartstrings.

Elsewhere, Ivy and Nora enjoy a cup of tea and swop notes about the sex-pest in their lives – Compo. Over the years, as the regular female cast grew, these interludes would become a regular fixture. This one, despite being a two-hander, is still good though – Ivy advising Nora to take a spoonful of sugar occasionally (“you might find it might relax you. Keep your hands off your airing cupboard”). The mundanity of their conversation (“troublesome as men are, their old vests make for lovely dusters”) is delightful.

They then plot to stop Compo in his tracks. Nora advises Ivy to drop the chip pan down his trousers (“the sooner it gets covered in batter the safer it’s going to be”). Ouch! In the end they elect to just forcibly remove his trousers, but maybe – for the moment – it may have done the trick. 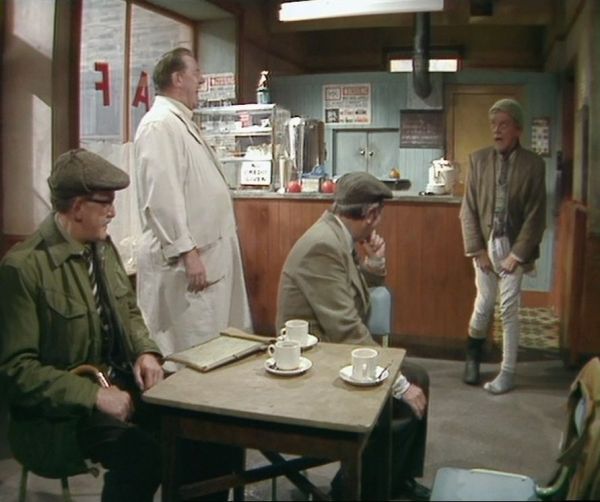 Small Tune On a Penny Wassail opens with Wally – still dressed in his pyjama top – briefly tasting a moment of freedom before being dragged back into the house by Nora to continue his festive obligations. A reflective Compo, observing this domestic fracas, sighs before walking down the deserted streets. This is an early sign that Roy Clarke won’t be bashing you over the head with false Christmas sentiment – that’s simply not his way.

A moment of levity then occurs when Compo spies a lad with a new skateboard. Ever the child at heart, he can’t resist having a go (as you might expect, he falls off rather abruptly). This isn’t a big set-piece moment, but it does set things up for the episode climax.

The others are also given their solo moments. Foggy, after attending church, manages to accidentally hit the vicar in a very delicate place with his stick. It’s a typical Foggy moment – for a brief moment he’s given an air of authority and respectability, which is then abruptly punctured.

Meanwhile Clegg, never one to be overflowing with Christmas cheer, has nevertheless stirred himself and wandered off to the phonebox to ring up his friend, Gordon (Larry Noble). Gordon’s not in the mood to receive yuletide greetings though, due to the fact a fire’s broken out in his shed. What caused the fire remains an unresolved mystery ….

Eventually all three meet up at Clegg’s house for Christmas dinner. Compo’s assistance in the kitchen is clearly not called for, so he stalks around the house like a bored child whilst the other two reflect on the time of the year. Clegg: “Christmas comes but once a year, it just seems longer.”

The cynical Clegg gets most of the best lines during these scenes. “I gave up smoking so that I could live longer. It’s at times like this you wonder if you’re doing the right thing”. At least the meal prepared by Clegg looks like it was worth eating – which almost makes up for the air of melancholy that’s descended over them. Although when we drop in on some conventional family units later on it’s plain they’re not having a particularly sparkling time either.

Foggy suggests they pop down the hospital to visit poor old Edgar (Teddy Turner), who there all on his own. But of course it’s revealed that Edgar’s got everything he could wish for – all the food he can eat and plenty of attention from the nurses. Compo acidly mentions later that even the man dying in the next ward is having a better time than they are.

We’re then given a little vignette showing Ivy and Sid at home in their kitchen. They’re busy feeding the hordes of (unseen) relatives who have descended on them – Ivy with an air of duty, Sid with an ever increasing sense of exasperation. There’s a matching moment with Nora and Wally, where Wally is given a killer putdown. “Why don’t you go sit down, Nora? You’ve been on your mouth all day”.

Back at Clegg’s house it’s finally time for the presents. It’s always seemed slightly odd to me that Clegg and Foggy wrapped their presents for Compo in the same type of wrapping paper (plus their presents to each other were also in identical paper, albeit different from Compo’s). If you see what I mean. It’s probably easier to understand when you watch the scene but there’s something not quite right there.

They all seem quite chuffed with their gifts, as does Ivy when she receives an unexpected present from Sid. Sid and Ivy’s café based warfare can be vicious at times but there’s clearly still a frisson of love between them, even if it’s buried very deep. Her look of pleasure at the black negligee gifted to her by her husband suggests that his luck might be in later. Or not, depending on your point of view ….

We’re heading into the era when stunts (and stunt doubles) would dominate. This episode has been much more reflective and downbeat, but I suppose you can’t blame Roy Clarke for wanting to end things on a high – so an irresistible force (Compo on a skateboard) manages to navigate his way through a seemingly immovable object (the Dodworth Colliery Brass Band).

I’ve still yet to work out how the episode title ties back to the episode itself though. Answers on a postcard please.

There’s a rather nice interview with stuntman Stuart Fell on this Last of the Summer Wine blog, Summer Winos.

It doesn’t just concentrate on his work on LOTSW though, there’s plenty of information about the rest of his long and varied career.  Well worth a read.

As is the blog, in which Bob Fischer and Andrew T. Smith work their way through every episode of Roy Clarke’s immortal comedy creation.  They’ve been a bit quiet of late, but hopefully they’ll come back to it soon as they’ve a long way to go – they’re only up to 1982 at the moment!