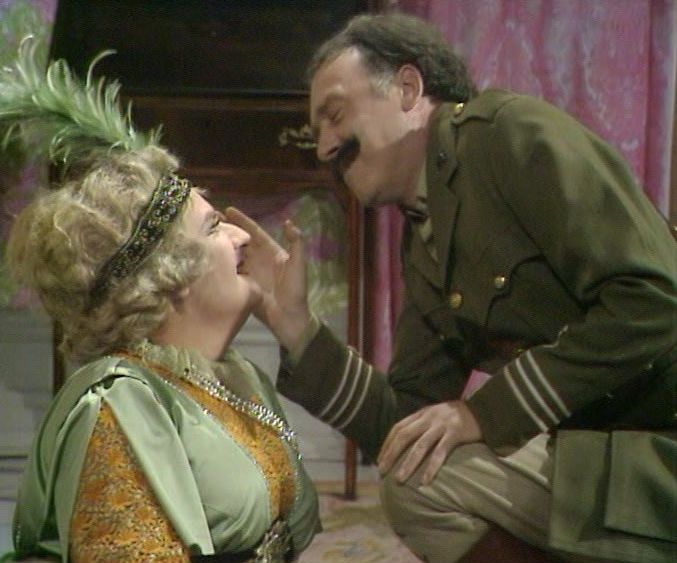 Fritz Braun (Barker) is a rather incompetent shorthand typist in the employ of Kaiser Wilhelm (Dennis Ramsden).  The Kasier dismisses him and then decides that since he knows too many secrets he can’t be allowed to live.  But the man he choses for the task, Captain Otto Von Diesel ( Graham Armitage), finds himself unable shoot his brother-in-law in cold blood.  This presents a problem, Fritz needs to be dead whilst a sultry female spy called Lola is reportedly dead but it would be better if she was alive.  This presents an obvious solution, why doesn’t Fritz drag up as Lola ….

After a couple of good episodes, Lola is a broad and fairly comedy-free farce.  Although Barker would put on women’s clothing on numerous occasions during The Two Ronnies, it was never something he felt terribly comfortable with.  His Lola is therefore a fairly broad creation (although the script by Ken Hoare and Mike Sharland didn’t really give him many opportunities for subtlety).

This studio-bound story flits between Germany and Paris and if the script is rather indifferent, then it’s possible to derive some enjoyment from the guest cast.  Hugh Walters has a few nice moments as a German corporal, Graham Armitage impresses as Von Diesel whilst Freddie Jones plays it very broad (but there’s no other way with this script) as an English officer bewitched by Lola’s charms.  The peerless Valentine Dyall has a small role as Lord Kitchener, posing for his famous portrait, complaining that his arm is going to sleep and taking more than a shine to Lola.

This one is best filed under indifferent. 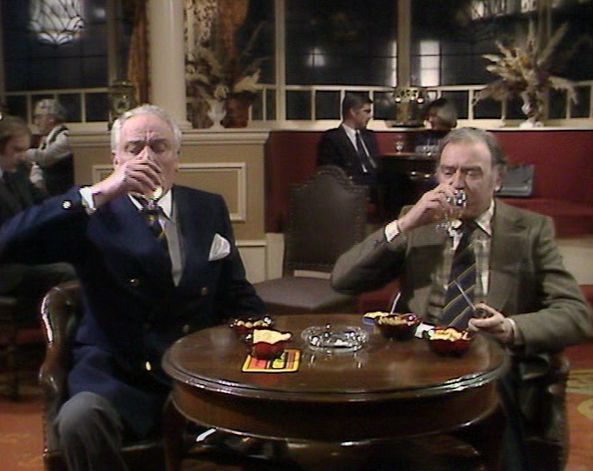 Charles (Charles Gray) and Peter (Freddie Jones) operate under a strictly fixed routine.  Friends since childhood, they went through the army together and now share the same house.  Charles likes to organise everything and as they enjoy their regular evening drink at the pub, he outlines how he sees the week progressing.  Friday night sounds particularly exciting.  “In here for our usual and then off home and wash our hair.  I’ll wash yours and you can wash mine, I never get all the soap out otherwise.”

Then Peter drops a bombshell – he’s getting married on Saturday.  This throws Charles into a spin, how can Peter get married when they’ve got the laundrette to do?  Peter is firm though, he’s in love and he’s going to be married at 12.00 noon on Saturday.

Charles continues to be baffled that Peter could desert him, after all they’ve been through.  “After thirty five years, school chums, brother officers, comrades-in-arms, joint lease-holders of a maisonette and an allotment – which we were going to manure on Sunday.”

But Peter wants to break free from his routine existence and do something very different.  He tells an increasingly appalled Charles that he and his wife-to-be will be “staying in South America.  We’re taking a raft up the Amazon, right into the rainforest.”

If all this sounds very unlikely, then there’s a good reason why – Peter’s made it all up.  There’s no girlfriend, no marriage and on Saturday he’ll be locked into the same old routine.  He then confesses to Charles that he created this wild fantasy in order to try and break the monotony.  Charles agrees that they should try and do something different, but it’s clear that they never will.

A bittersweet tale, Cheers is pretty good stuff, although there are a few awkward moments which do firmly place it in the 1970’s.  Charles is disgusted to see a black woman on the arm of one of the other pub regulars (Nicholas Courtney).  He mutters that such a thing shouldn’t be allowed and he declares that “I’d like to know where he gets his money from, I’m sure he’s a mercenary.”  Awkward though this is, it’s always nice to see Nicholas Courtney and whilst it’s not a large part, he makes the most of it.

Charles is also amazed to learn that people consider that he and Charles are a couple of “poofs”.  The fact they do everything together (including washing each others hair) has clearly not gone unnoticed by the other pub regulars (who call them “Pinky and Perky” behind their backs) but Charles doesn’t understand this at all.  “I don’t believe it! I don’t look anything like a poof.”

Freddie Jones gives a lovely turn as a middle-aged man yearning for escape from his humdrum life whilst the always solid Charles Gray is suitably bluff as another middle-aged man who lives for exactly the routine that drives Peter up the wall.  If anything changes, you can tell that Charles simply wouldn’t be able to cope.

If the scripting of The Galton and Simpson Playhouse so far hasn’t always been the sharpest, the star-quality of the actors has been enough to hold my interest.  Cheers is another good example of this.