Following directly on from the previous episode, Christmas finds the relationship between Bren (Victoria Wood) and Tony (Andrew Dunn) deepening – although the dramatic cliffhanger from last time (Tony and Bren enjoyed their first kiss, only to be interrupted by Bren’s estranged husband) has to be addressed first.

Although the first series of dinnerladies was traditional sitcom fare (in that each episode had a fairly linear plot) it’s clear that Victoria Wood had more ambitious plans for the second and final series.  Sitcoms with continuing storylines aren’t unique (Brass is a good example of a show with a strong serial theme) but they are unusual.

The growing attraction between Tony and Bren is one of the major plot-threads of series two, but all of the main characters have their own individual story arcs which peak at different times.  Drama mixes with comedy here, as Bren finds herself plagued by self doubt.  She can see a possible future with Tony, but her life to date (exemplified by her disastrous first marriage) makes her convinced that she’ll “bugger it all up” somehow.

Tony initially reassures her that nothing’s changed between them, but then later he becomes distant and distracted – which suggests that he’s lost interest.  He hasn’t of course (instead he’s rushing around attempting to organise an impressive Christmas and Birthday treat for her).  It has to be said that this is a slightly clumsy piece of plotting, since it demands that Bren has to jump to the wrong conclusion several times. 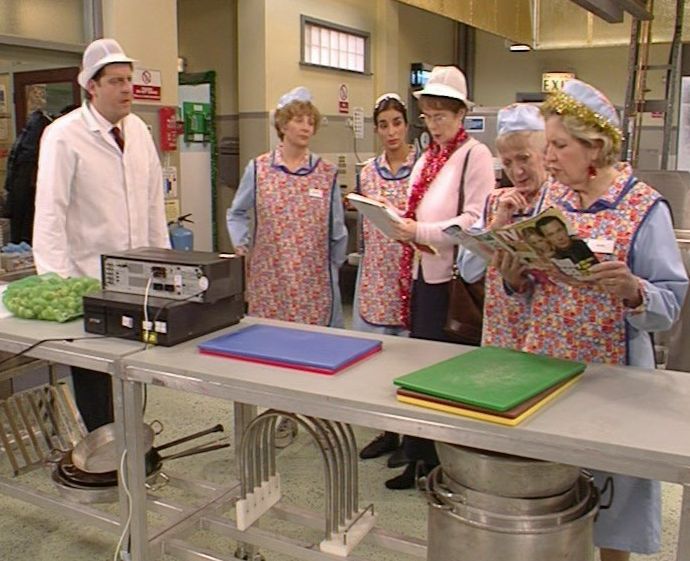 With Victoria Wood doing the heavy-lifting, drama-wise, the rest of the cast get all the best jokes.  Anita (Shobna Gulati) has her usual stream of bizarre conversational non sequiturs (today involving Disco Monks, thoughts of Michael Aspel, Sooty’s suitability as James Bond and bacon) whilst Jean (Anne Reid) and Dolly (Thelma Barlow) continue their gentle game of one-upmanship.  Jean’s latest attempt to roll back the years (she’s wearing an all-in-one bodyshaper but is having a spot of trouble with the studs) causes much merriment amongst those waiting for bacon – most notably Bob (Bernard Wrigley).

Bob later returns with Jane (Sue Devaney) for a spot of singing and dancing which draws a round of applause from the studio audience.  The unexpected arrival of Bren’s mother, Petula (Julie Walters), also – as always – entertains the audience.  With Janette Krankie in tow as her equally down-at-heel friend, Janice, Petula causes her usual amount of strife and discord, although there’s a nice sense of community as everybody else – in Bren’s absence – elects to send her packing.  If Bren has commitment issues then it’s in no small part due to her mother, who dumped her at an orphanage when she was a child (“I had her too early, there was too much going on. You can’t jive with one hand on a pram handle”).

There’s not a great deal of Stan (Duncan Preston) in this one, which is a shame, although he does have one lovely and typically bizarre monologue.  “Did I ever tell you about the day I had to go to casualty with a dart in me head? If you take my head as a dartboard it went in here (pointing to his chin) low score. Double top I’d have been dead”.  Although there’s method in his madness as he’s attempting to distract Bren, who’s on the verge of leaving Tony and the canteen forever.

But then it’s revealed that Tony hadn’t forgotten to get her a present – in fact he’s managed to smuggle the Black Dyke Band into the canteen ….

This is another of those moments where you have to suspend your disbelief somewhat – not only that Tony could persuade the Black Dyke Band to give up their Christmas Eve but also that they were able to get Bren out of the way just long enough to sneak them all in.  Well it’s Christmas, so let’s be generous.

Slightly iffy plot mechanics aside, it’s still a touching moment and had the series ended here then it would have seemed like a natural conclusion.  But there were four more episodes to come, meaning that everybody’s stories still had a little time to run. 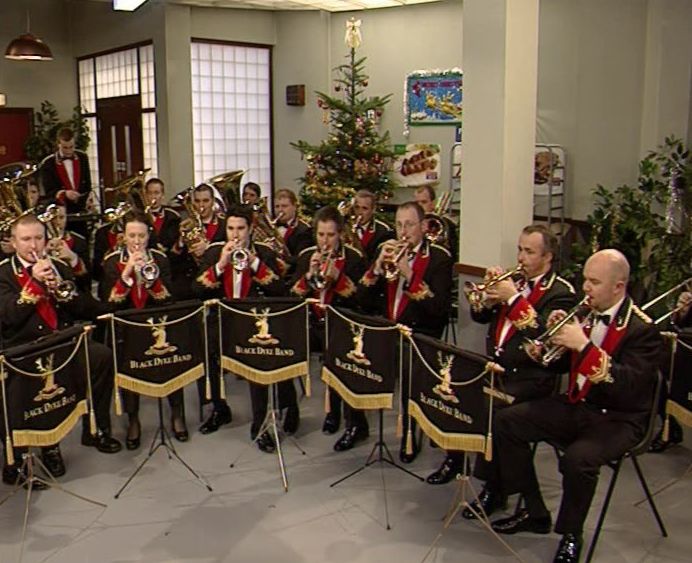 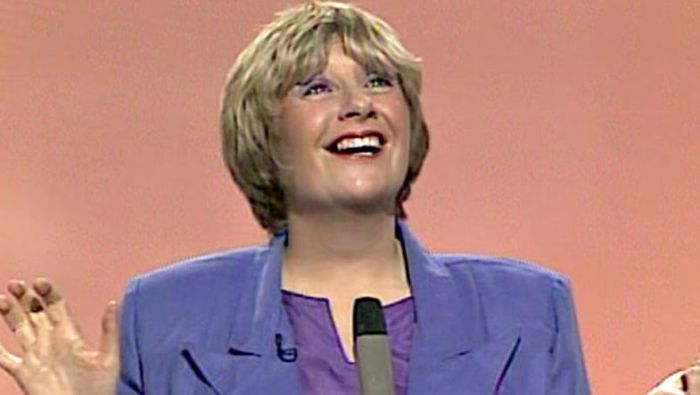 The news of Victoria Wood’s death at the age of just sixty two has come as yet another unpleasant shock in a year that has already seen the departure of far too many talented people.

Following her television debut on New Faces in 1974 and a handful of appearances on That’s Life! (1975-1976), she had to wait a little while longer for her first meaningful break.  This came in 1978 when she was invited by director David Leland to pen a play for a season he was planning at the Crucible Theatre in Sheffield.  Although she’d never written a play before, with the confidence of youth Wood dashed off Talent in next to no time.  She was later to admit that “I kept writing plays after that, but they were all terrible and never saw the light of day.”

Set in a seedy Northern club, it follows the misadventures of Julie, keen to hit the heights of showbiz, and her socially awkward friend Maureen.  In 1979 it was recorded for television with Wood as Maureen and Julie Walters as Julie.  This was a key moment, as Walters became the first of Wood’s “rep” company of actors (later to include the likes of Duncan Preston and Celia Imrie).  With a host of strong supporting performances from the likes of Bill Waddington, Nat Jackley and Kevin Lloyd, Talent was a more than impressive debut.

Wood and Walters would also feature in another Wood-penned play, Nearly a Happy Ending (also 1979) and off the back of these plays it probably seemed logical to give them their own sketch series, Wood & Walters (1981/82).  Although something of a curate’s egg, it’s also fascinating viewing due to its obvious similarities to the later BBC show Victoria Wood: As Seen On TV (1985 -1987).  Possibly part of the slightly off-key feeling about Wood & Walters is because neither of them were household names at the time – so the audience tended to be appreciative, rather than effusive (in some ways it’s similar to the polite and muted reaction to the early Monty Python shows).  By the time of As Seen on TV, Wood was a much more recognisable figure and whilst the material was stronger, her increasing bond with the audience no doubt also helped to generate a more positive response.

Following the end of As Seen on TV, Wood obviously felt that she didn’t want to write any further sketch series (although she’d produce a number of Christmas Specials over the next few decades).  Her next major work was Victoria Wood (1989).  A series of six unconnected half-hour sitcoms, it was politely received but never garnered the same critical reputation that As Seen on TV did.  Which is a pity, as it’s full of Wood’s trademark wit and remains one of the undiscovered gems of her television career.

During the time that she was writing and performing on television, she was also pursing a career as one of the nation’s top live stand-up comedians – which may explain why her credits for a large part of the 1990’s are fairly sparse.  But there was Pat and Margaret in 1994 (a Screen One play with another memorable role for Julie Walters) and between 1998 and 2000 she would write the show which will probably remain her signature series – dinnerladies.

Gathering some of her trusted collaborators around her (as well as some fresh blood) dinnerladies was a fine ensemble piece.  Wood was always a very unselfish writer – which can clearly be seen across the course of the series’ sixteen episodes.  If dinnerladies is essentially about the journey of Bren and Tony, every other main character is still allowed their chance to shine and often Wood gave the biggest laugh lines to other members of the cast, rather than hogging all the best jokes for herself.  Still a regular on Gold, there seems no doubt that dinnerladies will be one of those handful of sitcoms (like Dad’s Army, so beloved by Wood herself) which will endure for decades to come.

Tonight, I plan to dig out Talent for a rewatch, which I think is a suitable tribute to a great British comedy writer and actor.  RIP.

Victoria Wood was always faintly unimpressed, visually, with the way that dinnerladies turned out. She had pictured it shot with hand-held cameras but was told that it wasn’t possible.  So what she got was something that looked like a traditional sit-com (although this isn’t really any bad thing).  It seems to be an ever-present fixture on Gold, along with the likes of Porridge and Steptoe and Son, and it’s a good indication of dinnerladies’ quality that it doesn’t seem out of place when broadcast alongside the comedy greats of the 1970’s.

Whilst it may have rankled with Wood that the style of the series was so resolutely traditional (particularly when the likes of The Royal Family and The Office were able to quite easily eschew this format) dinnerladies was a sit-com that probably wouldn’t have benefited from the sort of wobbly-cam single camera shooting that was to dominate comedy in the years to come.

It’s written, essentially, as a stage-play with just a single location (and it’s probably not surprising to know that most of the scripts were adapted successfully for several theatre tours).  We may hear about the world outside but the focus remains firmly on what happens inside the canteen.

Wood was able to assemble a first-rate cast, some of whom (Duncan Preston, Ceila Imrie, Julie Walters) had enjoyed a long association with her, whilst others (Thelma Barlow, Andrew Dunn, Shobna Gulati and Maxine Peake) were newcomers.  She obviously knew what Preston, Imrie and Walters could deliver, but the characters of the others (as well as Anne Reid, who had appeared in Victoria Wood – As Seen on TV) would maybe only really begin to develop towards the end of the first series and into the second as she began to tailor their parts based on her experience of working with them.

As the creator, writer and co-producer, Wood had an enormous amount of power that she was able to wield.  But whilst the overall arc of the two series is the story of Bren and Tony, Wood doesn’t dominate each episode and nor does she give herself all the best lines.  She was comfortable enough to sometimes remain in the background as a passive figure, whilst the others enjoyed the biggest laughs.

If the series was shot in a traditional way, the actual recording process was quite different.  It would be shot on a Friday evening and then Wood and co-producer Geoff Posner would view the results, with Wood re-writing the script which would then be re-recorded on the Saturday evening.  Although this was common practice for American sit-coms, it was unusual, if not unique, for a British sit-com.

It would be lovely one day to have DVD sets released with both the Friday and Saturday recordings, so that we can see exactly what was changed, but I’m not going to hold my breath.  The DVD releases we have are resolutely bare-bones, with no commentaries or special features, which indicates that Victoria Wood isn’t particularly keen to spend a great deal of time analyzing her work.