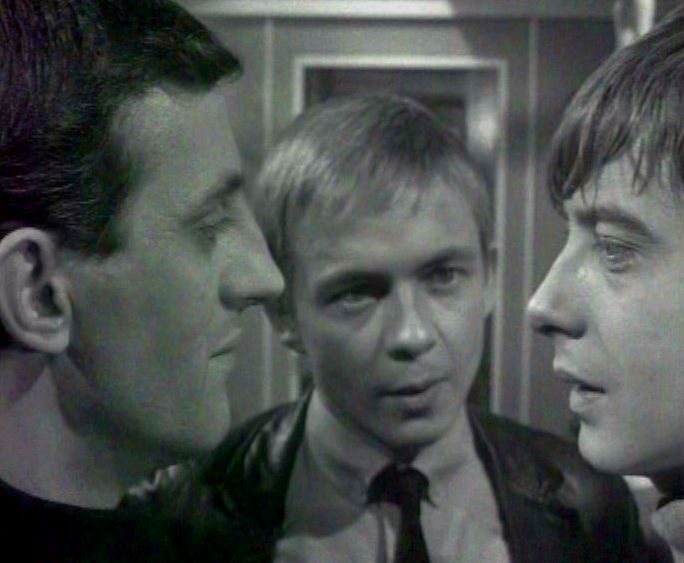 Peter Sloane (Anton Rodgers) is the leader of a group of rich and bored young people who turn to crime in order to relieve their ennui.  Sloane becomes addicted to random acts of violence, but whilst he appears to have no conscience, others like Tim Coles (Derek Fowlds), aren’t so cold-blooded.  And as they begin to squabble amongst themselves, Gideon and the others start to close in ….

Whilst it’s true that the first sight we have of Sloane is likely to elicit more of a smile than terror (due to his Beatle wig and dark glasses) his instability is quickly demonstrated after he and Sue Young (Annette Andre) rob a greasy spoon cafe.  The owners are a friendly-looking couple in their fifties, which gives Sloane’s attack on them even more of an impact.

It’s no surprise that we don’t see the blows delivered to the woman, but director John Llewellyn Moxey still ensures the scene carries a punch by cutting away to Sue’s face.  She watches Sloane’s attack with a degree of amusement, which also serves as shorthand to indicate she’s on a similar wavelength to him.

The subsequent scene, as Sloane and Sue make their getaway in a car with Coles and Tony King (James Hunter), sets up the character dynamics between the four very clearly.  Coles finds Sloane’s violence both repugnant and unnecessary, whilst King says nothing.

Later, Sloane explains his philosophy to them.  “This nation is soft, flabby. A mass of gutless wonders led by a handful of little grey people in power. The only time Britain accomplishes anything is when we’re at war. War brings out the best in people, they develop virility of spirit.”

When Keen looks in on the crime scene on his way home (with, naturally, a beautiful young woman in tow) he reacts with a degree of bitter humour after Det. Insp. Caldwell (Roddy McMillan) suggests that the attack could be the work of teenagers, doing it for kicks.   If it is, then Keen indicates that even if they’re caught they’ll face no particular punishment.

Caldwell agrees as he ironically tells Keen to “remember, teenage crime is an environmental problem.”  It’s a rare example of cynicism in the series, since it suggests that sometimes crime does pay.

Anton Rodgers might have been pushing it a bit by attempting to play a young tearaway (he was in his early thirties at the time) but although he’s a tad long in the tooth Rodgers is still very compelling.  Sloane’s arrogance and unswerving belief in his own invulnerability are captured well by Rodgers and this makes his eventual downfall even more satisfying.

Derek Fowlds has a good role as Coles, the only member of the gang with a conscience, whilst James Hunter (star of an excellent episode of Out of the Unknown – Thirteen to Centaurus) has less to do but still has a few key scenes, especially when Sloane suggests they rob King’s aunt and uncle.

The generation gap (“kids these days” mutters Gideon) is debated.  Gideon regards the youth of today with a jaundiced eye, whilst his wife Kate is more forgiving as she sees many parallels with her own youth.  “In our day it was fast sports cars, parties on the river, Duke Ellington, chianti out of those wicker-basketed bottles.”

When Gideon counters that nowadays kids go around beating people up she responds that only a few do, but it’s not enough to convince him.  “Kate, they’re violent, restless. Sometimes I think they’re even half crazy.”

The long arm of coincidence sees Keen’s latest girlfriend Elspeth McRae (Jean Marsh) invited by Sue to the next party aboard Sloane’s houseboat (both are models).  When Keen learns about it he also goes along, as by now the police have an interest in Sloane.  Keen and Elspeth share a similar discussion about young people as George and Kate Gideon did  – and with similar results, Keen is pessimistic whilst Elspeth is optimistic.

Gideon’s Way was never a social-realism series, so the theme of youth crime (violence, drink, drugs) does end up being handled a little uneasily.  But whilst no-one could mistake this for an episode of an 1970’s crime drama like The Sweeney or Target, it does possess an undeniable period charm, helped by the first-rate guest cast.  And thanks to the likes of Rodgers and Fowlds this is one of the strongest episodes out of the twenty six made.

Broadcast on the 17th of December 1984, Party Games was the final episode of Yes Minster (it lead directly into the sequel series Yes Prime Minster).  It has a slight Chrismassy feel, but it’s not really a surprise that politics (rather than Christmas) dominates proceedings.

We open with Bernard (Derek Fowlds) telling Jim Hacker (Paul Eddington) that there’s something much more urgent than the defence papers he’s working on.  Jim pulls a face when he realises that Bernard’s talking about his Christmas cards, but obediently goes over to the desk where a mountain of cards awaits him.  As might be expected, the neat civil servant in Bernard has organised everything down to the finest detail. “These you sign Jim, these Jim Hacker, these Jim and Annie, these Annie and Jim Hacker, these love from Annie and Jim.”

He’s due to retire early and is keen to appoint a successor. But the right man for the job has to be able to ask the key question – when Sir Humphrey asks how Sir Arnold plans to spend his retirement, it’s obvious he’s on the right track. “There might be jobs you could pick up, ways you could serve the country, which your successor, whoever he might be, could put your way – er, persuade you to undertake!”

One of the joys of Yes Minister and Yes Prime Minster was the way in which it felt horribly credible.  This wasn’t surprising, since the writers (Anthony Jay and Jonathan Lynn) had access to several different high level sources who would feed them valuable material.  But what is surprising about Party Games is how it seems to predict future events (a sheer fluke but it’s fascinating nonetheless).

When the Home Secretary, shortly after launching his Don’t Drink and Drive Campaign, is picked up for drunk driving, he’s forced to retire.  Shortly after, the Prime Minister also announces his retirement – which sparks an intense leadership contest.  It soon becomes clear that the Prime Minister hated the Home Secretary and only stayed in power long enough to ensure that he’d never get the chance to become PM.

Two clear candidates for the top job emerge.  Eric Jefferies (Peter Jeffrey) and Duncan Short (Philip Short).  Both are viewed with disfavour by the Chief Whip Jeffrey Pearson (James Grout).  “If Eric gets it we’ll have a party split in three months. If it’s Duncan, it’ll take three weeks.”

What they need is a comprise candidate – somebody with no firm opinions and lacking the personality to upset anybody.  Jim Hacker, of course, is the perfect man.  When Party Games was repeated in 1990, shortly after Margaret Thatcher’s fall from power, the parallels between Jim Hacker and John Major were simply irresistible.  Both seemed only to have got the job because they were seen as a safe (and bland) pair of hands – as well as preventing other, more divisive, figures from occupying the top job.

As ever with Yes Minister, the script sparkles with killer one-liners.  A favourite of mine comes from Sir Humphrey after Jim wonders what will happen to the Foreign Secretary following his enforced retirement.  “Well, I gather he was as drunk as a lord. So, after a discreet interval, they’ll probably make him one.”

Nigel Hawthorne also has the opportunity to recite a typical tongue-twisting monologue.  This is how Sir Humphrey breaks the news to Jim that he’s been promoted to Cabinet Secretary. “The relationship which I might tentatively venture to aver has been not without some degree of reciprocal utility and perhaps even occasional gratification, is emerging a point of irreversible bifurcation and, to be brief, is in the propinquity of its ultimate regrettable termination.”

Jim is able to persuade both Duncan and Eric to stand down from the leadership contest after he reads their MI5 files. As Sir Arnold says, “you should always send for Cabinet Ministers’ MI5 files, if you enjoy a good laugh.”

Party Games may feel a little bit stretched out at sixty minutes (as well the fact it does feel like an extended intro for the new series) but there’s still more than enough good material to make it an episode that repays multiple viewings.

Trawling YouTube in search of interesting material on UFO, I came across this intriguing pilot from 1967.  Leigh had, of course, worked with Gerry Anderson previously, so it’s possibly no surprise that The Solarnauts bears some similarities to Anderson’s shows (although it becomes obvious very quickly that nobody working on the pilot had anything like the skill of Derek Meddings).

Still, it did predate UFO by several years, so it’s interesting to wonder if Anderson picked up any ideas from this.  No surprise that it didn’t make it to a series, but it’s good cheesy fun and it’s a chance to see some good actors (Derek Fowlds, John Ringham) adrift in space.  Plus Martine Beswick looks very nice.