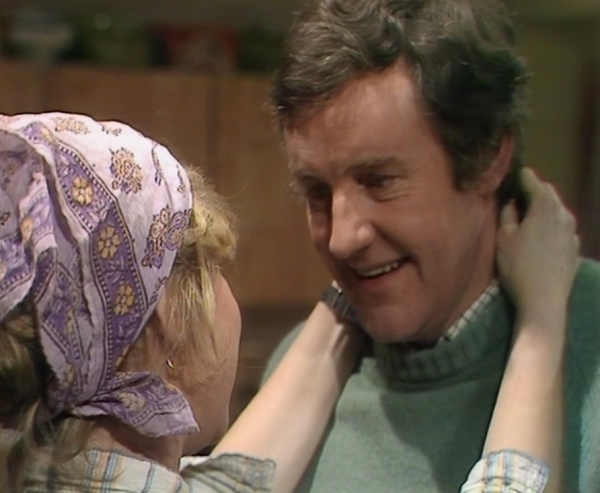 Rounding off my week in 1977 with a skim through Sunday’s schedules.

The Good Life is an obvious pick – tonight’s new episode is The Weaver’s Tale.

It never fails to give me a twinge of amusement when somebody comments on Twitter about how selfish Tom is – why has it taken them so many decades to work this out? Tonight’s episode is a perfect example of his working methods – Tom spends his and Barbara’s hard earned profit on a loom without consulting her. No surprises though that everything works out in the end.

I’ll stick with ITV for a repeat of Edward VII and (from a variety of regional films) Two Way Stretch.

If I had access, then both Jubilee and She would be on my list. Maybe they’ll surface sometime in the future, fingers crossed … 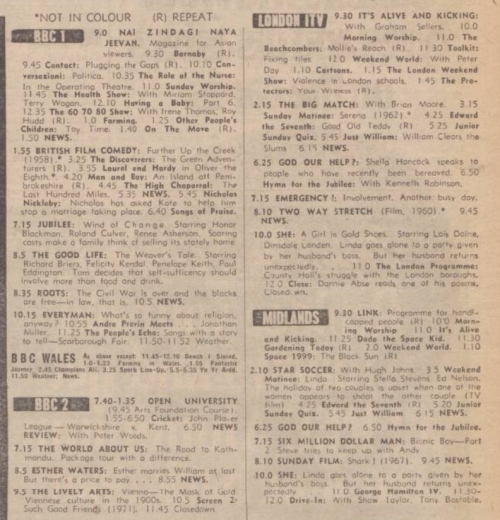 Unsurprisingly, the message of Silly, but it’s fun is that you don’t have to spend a fortune in order to have an enjoyable Christmas – all you need is the company of good (no pun intended) friends.

The Goods, of course, have no other choice than to economise (Tom scavenging a Christmas tree – or at least part of it – from the greengrocers, Barbara using her craft skills to make a yule log with a rather substantial Robin). But on the plus side, it does mean that this year’s Christmas has only cost them fifteen pence!

But next door, commercialism is rampant – with Margo railing against tradesmen. David Battley is the tradesman in question, offering a wonderfully phlegmatic performance which was something of a trademark of his (a similar turn in The Beiderbecke Tapes immediately springs to mind).

Margo’s unhappy that her tree – part of her Christmas delivery – is slightly under the required height, so she decides that everything will have to go back (it’s all or nothing for her). Given that it’s Christmas Eve this seems a little reckless. I know that the seventies was another era, but surely nobody would have been expecting another delivery on Christmas Day? And yet, this is the crux of the story.

Suspension of disbelief also has to come into play when pondering the question as to why Margo’s left it so late to take delivery of all her Christmas provisions – not only the tree, but the food, drink and decorations. A severe lack of forward planning? Or maybe back in the seventies, Christmas really did begin on Christmas Eve and not – as it seems today – in late November ….

The upshot is that when no fresh delivery is forthcoming, she’s forced to ring up all her friends and fob them off from coming around (claiming that Jerry has chickenpox and therefore is out of bounds for the duration). Jerry’s “political” chickenpox cheers him up, as he wasn’t looking forward to spending yet another Christmas with all their friends, mouthing the same pointless trivialities at the same round of endless parties.

I daresay his wish (which came true) to simply have a quiet Christmas at home would have struck a chord with many ….

So Margo and Jerry spend Christmas Day with Tom and Barbara. It may just have been the especially potent peapod burgundy, but Jerry does get rather frisky with Barbara (although you can’t really blame him). The same sort of sexual tension doesn’t crackle with Tom and Margo (the mind boggles at the thought of that) but they do share a rather intimate scene in the privacy of the kitchen – although this is more about Tom forcing Margo to unbend a little, and embrace their silly Christmas revels.

It’s rather touching that Margo confesses that she’d like to, but simply doesn’t know how. But it doesn’t take long before she’s completely warmed up and throwing herself into all the party games with gusto.

Some sitcom Christmas specials, especially from the eighties onwards, tended to offer something more expansive than their usual fare. Silly, but it’s fun revels in the fact that nothing much happens except that the Goods and the Leadbetters have a jolly enjoyable Christmas day. The way it’s content to embrace the joy of simple pleasures may be one of the reasons why this episode always seems to strike a pleasing chord whenever it makes a Christmas appearance. 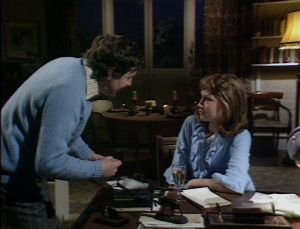 By 1975 John Esmonde and Bob Larby were a well-established writing team (responsible for hit series such as Please Sir!).  When creating The Good Life they started with pretty much a blank slate – they knew that Richard Briers would star (since the BBC were keen to have Briers appear in another sitcom) but everything else was up for grabs.

The first moment of inspiration came when Esmonde and Larby realised that both Briers and Larby were coming up to the age of forty – as Larby said, it was one of those “Oh God!” ages.  So it was decided that Briers’ character would be facing some mid-life crisis, but what form would this take?

Thoughts such as his character deciding to resign his job and sail around the world or live on a desert island were kicked around (though not terribly seriously) before they hit upon the idea of a man totally fed up with his job and the whole rat-race existence.  So he decides to “drop out” and become self sufficient.  This was a decent idea and the logical move would have been for him to sell his house and buy a place in the country.

But in a stroke of genius, Esmonde and Larby decided that Briers’ character (Tom Good) would do no such thing – instead his house and garden (in the middle of Surbiton) would be turned into a mini-farm, complete with animals, vegetables and all the other paraphernalia required.

With this initial concept decided, the rest of the small cast fell into place.  Felicity Kendall played Barbara, Tom’s long-suffering wife whilst Penelope Keith and Paul Eddington would be the Good’s long suffering next-door neighbours, Margo and Jerry.

Larby conceded that had Margo and Jerry simply been relentlessly negative then the series wouldn’t have worked very well.  Margo and Jerry might disapprove but they remain Tom and Barbara’s best friends and it’s the conflict between their friendship and their disapproval of the Good’s new lifestyle which drives some of the comedy along.

The first episode, Plough Your Own Furrow, is an interesting one.  It’s not wall-to-wall laughs, as there’s space when the characters (especially Tom) pause to reflect upon the course of their life so far.  Partly this may be because it was the first episode of a new series – as time went on, the audiences would become more attuned to the characters, the writing and the style of the programme and be more inclined to show their approval.

As the episode opens, we see Tom celebrating his 40th birthday.  He’s clearly a man searching for something which is, at that time, undefinable.

It’s quality of life.  That’s what I’m after.  If I could just get it right.  I’ll tackle it and get it right, as soon as I know what it is.

It’s plain that he isn’t getting any job satisfaction.   A whole host of small irritations are highlighted – such as the office car-park attendant knowing Jerry’s name, but not Tom’s (“I’ve really made an impact with you over the years, haven’t I?  Cor blimey, I’ve only been here eight years.”) and the fact there was an office cricket team but nobody thought to ask him (“We didn’t need to.  We got my dad to umpire”).

This is another indication that Tom is standing still at best or even moving backwards.  Everybody else in his department is in their twenties, so what does the future hold for Tom?  Jerry joined the company at the same time as Tom, but he’s ascended to the executive level whilst Tom remains stuck on the fourth floor, engaged in vital work such as designing a toy hippo to be included as a free gift in a popular brand of breakfast cereal.

Jerry spells it out to Tom.

We joined this company – what, eight years ago, wasn’t it it?  And do you know something?  I was frightened of you then.  You were a better draughtsman than I was and you had better qualifications than mine.  I was going to have to rely on pure cunning just to keep up with you.  Still, I needn’t have bothered, need I?  Cos look at us.  I’m up here and you’re down there, not getting picked for cricket teams.  And why?  Because you use about one tenth of your ability.  I have to use all mine and what I lack I make up with sheer, bloody crawling.

Then Sir (Reginald Marsh) joins Tom and Jerry (every time I type their names I assume that Esmonde and Larby picked those names as a tribute to a popular cat and mouse partnership) for a chat about his latest top-secret project.

The bubble has just come off the top of the think-tank and I don’t mind telling you that this is an absolute blockbuster of an idea.  It’s going to put our wildlife preservation series in the vanguard of world mouldings.  Our mould is going to be a giraffe! And Tom, I’m thinking of putting this giraffe on your plate.

Tom has the chance to advance his career with some “bloody crawling” but his hysterical laughter at the giraffe news scuppers this.  This is point when Tom finally realises the futility of his job (“You should have heard Sir.  You’d think he’d invented penicillin.  I couldn’t help laughing”).  There has to be more to life, but what?  Then Tom has a lightbulb moment, which he explains to Barbara.

I quit work and we become as damned near self-sufficient as possible.  We’ve got bags of garden, we grown our own food.  We keep some animals, chickens, a pig.  We produce our own energy, recycle rubbish.  We design the things we need.  I’ll show you what being a draughtsman is really all about.  Now , some things we can’t make, right.  Some things we can’t grow, right.  So we flog our surplus and buy stuff, and that’s without good old Medieval barter.  It’ll be damned hard work.  We won’t have much in the way of mod cons, but we might enjoy discovering what we can do without.  And we won’t need the world and his wife to give us the yea or nay.  It’ll be just us, doing it for us.  What do you think, eh?

This monologue is the essence of the series.  And Barbara’s reaction is interesting.  The camera cuts back to her on several occasions and her expression is, at best, neutral.  As it would have been incredibly unrealistic for her to instantly agree, even though it’s the middle of the night she puts on her wellies and walks up and down the garden until she finally decides that yes, they’ll do it.

This naturally results in a celebration – and as they dance in the fishpond the noise wakes up the Ledbetters next door.  We see Jerry, but only hear Margo (in this episode we don’t see Penelope Keith).  And the next morning Tom has been up good and early.  He’s sold his car and bought a plough, so he can start on the back garden and take the first step on the road to self-sufficiency.