Skip to content
HomeA web of mayhem and intrigue. Doctor Who – The Trial of a Time Lord – Terror of the Vervoids 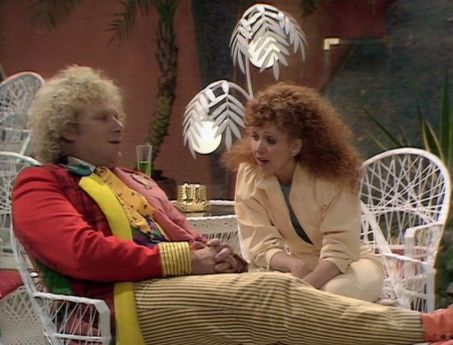 Anybody who’s ever studied the tortured production history of S23 will probably be aware that Eric Saward had some trouble in finding workable scripts.  Various writers were approached and submissions were made, but many of them came to nothing.  So it’s fair to say that Pip and Jane Baker weren’t his first choice to fill episodes nine to twelve –  they were commissioned more as an act of desperation when everything else had fallen through.

Not that Saward had much to do with the story.  The dispute over his script for episode fourteen (which I’m sure we’ll touch upon when we reach The Ultimate Foe) triggered his resignation and Terror of the Vervoids went through the production process without a designated script-editor (JNT assumed these duties).

The lack of Saward isn’t really notable – as the Bakers were quite able to script a decent story off their own bat (although as per all their stories, sometimes the characters are saddled with very unnatural sounding dialogue).  Vervoids is an entertaining whodunnit, packed with suspects and red-herrings galore.  It may (like the rest of S23) look a little cheap (some of the Hyperion III seems to be cobbled together from stock) but there’s a decent set of actors and minimal interference from the trial, which makes this one of the highlights of S23.

Chris Clough was assigned director of the final six episodes and his influence is notable from the first shot – he’s turned down the lights in the Trialroom and everything instantly looks a great deal better.  Although there are a few instances when it appears that the Matrix has again been tampered with, this doesn’t impact the story as badly as it did Mindwarp. And episode nine allows the story time to develop with the trial sequences book-ending the episode – it’s nice, for once, to have an episode where there aren’t delays every few minutes which are devoted to discussing meaningless points.

It’s maybe just as well that the Internet didn’t exist in 1986, as the casting of Bonnie Langford would have caused it to melt.  She wasn’t exactly welcomed with open arms by a certain section of Doctor Who fandom (who clearly saw her casting as the final straw) but looking back at this story she’s perfectly fine.  She does lack any sort of background (inevitable since we’re introduced to her cold in this story) but Mel’s young, keen, headstrong and with a knack for getting into trouble.  She can also scream in tune with the closing sting on the theme music, which is a good trick!

MEL: This will wake you up.
DOCTOR: Carrot juice?
MEL: It’ll do you good. Honestly, carrots are full of vitamin A.
DOCTOR: Mel, have you studied my ears lately?
MEL: It’s your waistline I’m concerned about.
DOCTOR: No, no, seriously, though. Is it my imagination or have they started to grow longer?
MEL: Listen, when I start to call you Neddy, then you can worry. Drink up.
DOCTOR: You’ll worry sooner when I start to bray.

But things do pick up after this.  It’s also interesting to note how mellow Colin Baker’s Doctor is – he’s a million miles away from the abrasive character of S22, all his previous arrogance and bluster have gone.

Once aboard the Hyperion, the Doctor and Mel mix with the guests and staff and start to uncover various conspiracies.  Clearly one whodunnit wasn’t good enough for the Bakers, so there’s a diverse series of events and problems which need to be solved.

Honor Blackman and Michael Craig are the main guest stars.  Blackman is good fun as the constantly bad-tempered Lasky, whilst Craig (although he sometimes has the air of a man who wishes he was elsewhere) is solid enough as Travers.  David Allister is quite compelling as Bruchner, the scientist with a conscience, whilst the late Yolande Palfrey manages to make something out of nothing, as the stewardess Janet.

Lurking in the air-conditioning are the Vervoids, who aren’t the most impressive monsters that the series has produced.  They’re just too polite to be particularly threatening (“we are doing splendidly”) and it doesn’t help that the actors in the suits tend to do typical monster acting – lurching from side to side and waving their arms about.

But if the Vervoids do lack a little something, then there are still a few scares to be had in the story.  Since the majority of cliff-hangers this season have ended on a crash-zoom of the Doctor’s pouting face, it’s nice to have two that buck the trend.  Episode nine gives us a chance to hear Mel’s ear-splitting scream as the Hydroponic centre explodes whilst episode ten has the creepy reveal of Ruth Baxter.

After twelve weeks, we’re now into the trial’s endgame.  Episodes thirteen and fourteen will either provide a satisfying conclusion to the previous three months or, well, they won’t.  The ultimate foe awaits ….