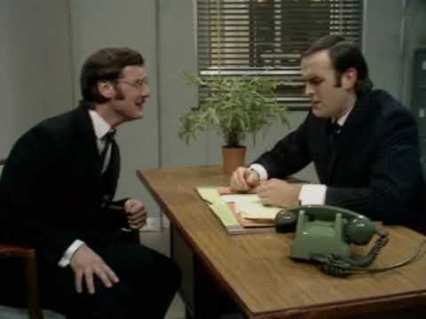 There’s more playing with the conventions of television at the start of this one – the first sketch can’t begin until a plumber (Palin), who’s relaxing at home, has traveled to television centre to take part in the sketch.  After his totally irrelevant walk-on, we’re into the sketch proper which sees Cleese as a bank robber unsuccessfully attempting to find large piles of cash in a lingerie shop.

Continuity announcer David Uncton (Chapman) seemed to enjoy it (“Well that was a bit of fun wasn’t it. Ha, ha, ha“).  He’s then able to tell us about the evenings entertainment.

Well, let’s see what we’ve got next. In a few moments ‘It’s A Tree’ and in the chair as usual is Arthur Tree, and starring in the show will be a host of star guests as his star guests. And then at 9.30 we’ve got another rollocking half hour of laughter-packed squalor with ‘Yes it’s the Sewage Farm Attendants’. And this week Dan falls into a vat of human dung with hilarious consequences.

It’s A Tree really is a tree – with more than a passing resemblance to David Frost (“Ha, ha, ha, ha, super”).  Although Frost had employed most of the Pythons (The Frost Report/At Last The 1948 Show) there was always a slight needle between them – some of the Pythons had a fairly jaundiced view about how Frost would use the talent of others to advance his own career.

As previously discussed, when they went to University some of the Pythons faced possible careers as solicitors or chartered accountants – a career in comedy seemed like a distant dream.  So they never miss an opportunity to mock the grey little men, as Cleese does here.

Your report here says that you are an extremely dull person. You see, our experts describe you as an appallingly dull fellow, unimaginative, timid, lacking in initiative, spineless, easily dominated, no sense of humour, tedious company and irrepressibly drab and awful. And whereas in most professions these would be considerable drawbacks, in chartered accountancy they are a positive boon.

I also love Ron Obvious (Jones) who attempts a series of impossible feats (jumping the channel, eating Chichester Cathedral, tunneling to Java) egged on by his unscrupulous manager (Palin).   There’s another pet shop sketch with Palin and Cleese, although it has a darker tone than Dead Parrot.  Cleese wants a cat, but Palin only has dogs – but he suggests a neat conversion (“Listen, tell you what. I’ll file its legs down a bit, take its snout out, stick a few wires through its cheeks. There you are, a lovely pussy cat”).

And just as the show started with everybody hanging about waiting for Palin to arrive, so the last sketch ends in a similar way.  Palin is the husband with an unattractive wife (Jones) who attracts an unfeasibly large number of admirers.  Mid-way through the sketch, Palin pops off for a tinkle, which brings the proceedings to an abrupt halt (“Oh no you can’t do that. Here, we haven’t finished the sketch yet!”).