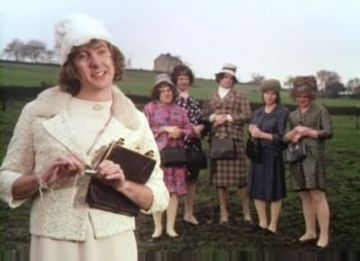 So far, we’ve seen a variety of linking devices used throughout the series – this one features a group of undertakers (with Terry Jones as a suitably ghoulish one – “Are you nervy, irritable, depressed, tired of life? Keep it up”) who pop up between the sketches with a series of mostly visual sequences that are certainly memorable.  Are they funny?  Mmm, I can’t say they’re particularly rib-tickling, but some of the rather crude stop-motion footage has its moments.

There’s one stand-out sketch in this show, which kicks off with Cleese as Inspector Tiger.  Upon entering a Agatha Christie type drawing room, he launches into the following monologue.

After some more mangled dialogue and a lobotomy, Tiger recreates the crime.  The lights go out and when they come on again he is dead (with a bullet hole in his forehead, an arrow through his throat and a bottle of poison by his side).  Then several of his colleagues turn up, each with a sillier name than the one previous.  Such as Chief Inspector Lookout (“Look out? What where?”) and Assistant Chief Constable Theresamanbehindyer (“Theresamanbehindyer? Ah, you’re not going to catch me with an old one like that”).

One-note though this sketch is,  it’s worth it just for Cleese’s Tiger.  And just as it begins to run out of steam, we move away with the undertakers promising that we’ll return to it as soon as something interesting happens.  Next up is some football chat with Idle as an interviewer and Cleese as Jimmy Buzzard, his none-too-bright interviewee.  I love Idle’s opening piece to camera.

From the plastic arts we turn to football. Last night in the Stadium of Light, Jarrow, we witnessed the resuscitation of a great footballing tradition, when Jarrow United came of age, in a European sense, with an almost Proustian display of modern existentialist football. Virtually annihilating by midfield moral argument the now surely obsolescent catennachio defensive philosophy of Signor Alberto Fanffino. Bologna indeed were a side intellectually out argued by a Jarrow team thrusting and bursting with aggressive Kantian positivism and outstanding in this fine Jarrow team was my man of the match, the arch-thinker, free scheming, scarcely ever to be curbed, midfield cognoscento, Jimmy Buzzard.

Cleese’s Buzzard (“Well Brian… I’m opening a boutique.”) is totally unable to respond to any of Idle’s questions and instead falls back onto a series of stock phrases.  It’s another nice performance from Cleese, particularly the expression of joy on his face when he thinks he’s thought of something interesting to say, which tends not to be anything worth waiting for.

We cut back to the drawing room (piled high with bodies) and then it’s onto Interesting People, which is odd.  There’s a basic premise (Palin as the host of a show which introduces us to interesting people) but that’s merely an excuse for a grab-bag of strange characters such as Jones as Mr Ali Bayan, who’s stark raving mad and Cleese as Mr Ken Dove, twice voted the most interesting man in Dorking. He shouts a lot.

As Python progressed, it tended to get stranger and more free-form and this is certainly one of the first series episodes that points the direction that the show would be heading in the future. Like many other episodes, it’s a bit like the Beatles’ White Album – there’s plenty to enjoy but it does feel bitty and fragmented. Not everything works, but at this point the hits outweigh the misses.

And with Professor R.J. Gumby lecturing on why he believed the Battle of Traflgar was fought near Cudworth and the Batley Townswomen’s Guild re-enacting the Battle of Pearl Harbour, there’s certainly something for everyone.

Next Up – Episode Twelve – The Naked Ant