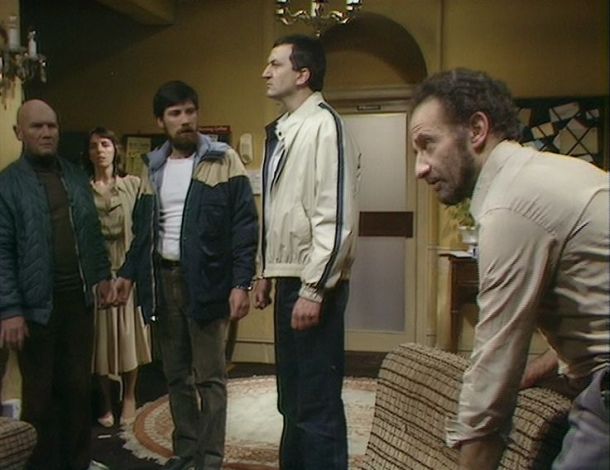 Bill and a number of other people (including Jo) have been captured by Coker – who staged the phony fire at the end of episode three.  He allocates one sighted person to a party of blind people and assigns them to a district.  They have to find a place to live and make regular trips to locate food – which will keep everybody alive until (Coker says) more organised help turns up.

Bill doesn’t believe that any help is coming but Coker’s a good enough judge of character to know that once he gets to know them, Bill won’t leave his party.  Whilst he was previously able to discuss (in abstract terms) that keeping the blind alive was ultimately fruitless, when he has to deal with actual people his humanity will ensure that he’ll do everything he can for them.

But even with his best efforts, there are numerous dangers.  Several are killed by a red-haired man (Gary Olsen) who’s leading a rival party.  His motivation for shooting them isn’t clear here, but he’s a character that will return later in the story.

The Triffids also claim some victims in another nicely directed scene.  As mentioned before, as they haven’t featured for a while their sudden reappearance in the middle of the episode comes as something of a jolt.

Disease thins Bill’s party even more and he’s powerless to prevent their deaths.  As London becomes even more of a health hazard, it’s clear that the longer he remains, the more danger he’s in.  Bill seems to be on the point of leaving when he’s visited by a young woman (Eva Griffith) who asks him to stay and offers herself to him.  It’s a heartbreaking scene and like so much of Douglas Livingstone’s adaptation, it’s taken directly from Wyndham’s novel.

Shortly afterwards, she dies and the few survivors flee in panic.  So Bill’s left alone once more. but this time he has an aim – he needs to find Jo.

Brian Aldiss once notoriously dubbed the works of John Wyndham in general and The Day of the Triffids in particular as “cosy catastrophes”.  Aldiss wrote that “the essence of the cosy catastrophe is that the hero should have a pretty good time (a girl, free suites at the Savoy, automobiles for the taking) while everyone else is dying off”.

I have to admit, I don’t find anything particularly “cosy” about either this adaptation or Wyndham’s original novel.  True, Wyndham’s novel did tend to feature mostly middle-class characters (another point which upset Aldiss) and this is changed here by making Bill (courtesy of John Duttine) more working class – but the concepts and themes developed thus far are pretty bleak.