Skip to content
HomeZodiac – The Horns of the Moon 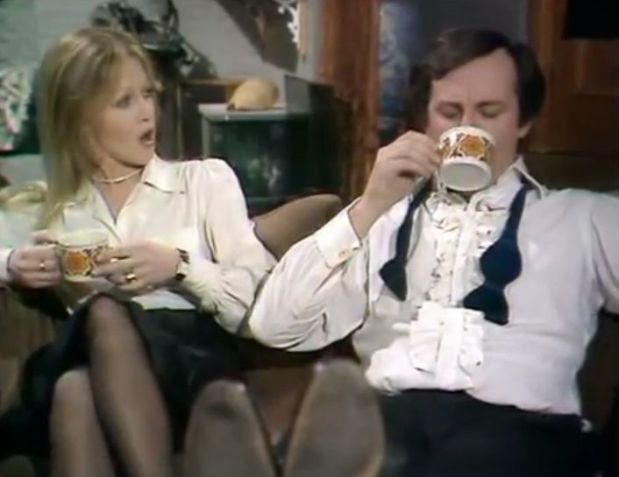 General Weston (Peter Jones) is the autocratic chairman of a small merchant bank.  He wishes to initiate a merger (which effectively means selling the bank).  His fellow directors and his son Tony (Peter Egan) are against the plan, but the General always gets his way – and he does so again.

But shortly afterwards, he falls down the bank’s lift shaft.  As Tony later remarks, anybody else would have broken their neck, but he escaped with just a sprained arm.  However, it does seem to indicate that somebody at the bank wishes him harm.

There’s no shortage of suspects.  His son would inherit everything on his death, whilst the vampish Julie Prentiss (Michele Dotrice) seems to have the General wrapped around her little finger.  The other directors, Rodney Tyce (Graham Crowden), Ian Rentoul (Ronald MacLeod) and Agnes Courtney (Gillian Raine), could all have motives whilst the servant Dobbs (Norman Chappell) is another possibility.

Tony is a regular client of Esther’s and he calls on her to ask for advice.  He wants to leave the bank and break free from his father – but only if she confirms that the stars are correctly aligned.  She visits him at the bank to deliver the horoscope and he suggests they have a drink.  It comes as something of a surprise to find the General frozen solid in the fridge …..

The Horns of the Moon is by far the best mystery of the series since, as the above list indicates, there’s no shortage of suspects.  Once again, Esther is at the scene of the crime when the body is discovered, much to Gradley’s despair.  He’s also a little peeved at having to leave his dinner companion.  “You may not know it but I was at a charity dinner, escorting a debutante of the year.”  When Esther asks which year, he tells her it was quite a recent vintage.

Gradley quickly gets a feel for the list of suspects and it’s clear that Tony is his favourite.  Esther violently disagrees as she says it’s astrologically impossible for him to have committed the murder.  Gradley doesn’t arrest Tony straight away as he knows he’ll make his way to Esther’s flat in order to unburden himself.  This he does and what Tony says is pretty damming.  “What would you say if the files showed that I embezzled two hundred thousand pounds from the firm and the gun that killed the General was in my desk and that I wiped it clear of fingerprints and put it back in the boardroom and I took the files and put them in the cellar?”

Tony protests his innocence – he looks guilty, but that’s only because somebody has framed him.  Later on, even more evidence pointing to his guilt comes to light and Gradley arrests him.  Esther remains unconvinced and continues to nag at him to consider the other possibilities.

As with all the episodes, there’s a lovely group of actors here.  It’s a shame that Peter Jones doesn’t last longer as he’s got some nice comic business as the General.  Peter Egan is a bundle of nerves as the perpetually twitchy Tony whilst Graham Crowden is quite restrained as Tyce.  Tyce is a character that exists on the outskirts of the majority of the story, but he does have a part to play later on.

The banter between Gradley and Esther also helps to keep the interest chugging along.  Both of them, especially Anton Rodgers, have great comic timing and it’s their partnership which is one of the main strengths of the show.

The Horns of the Moon was the final story of this short series.  The real murderer is eventually found and Tony is set free, but that’s the end of the line for Gradley and Esther.  The premise of the series (detective and astrologer teamed up) was an intriguing one, although it’s fair to say that some of the plotting was a little loose in several of the episodes .

The partnership between Hempel and Rodgers as well as the guest casts more than made up for this though and there was certainly enough potential for a further run of episodes.  It wasn’t to be though, which is a shame since Zodiac is a nice little series and provided you don’t mind studio-bound drama (not a single location shot in the six episodes) it’s well worth tracking down.