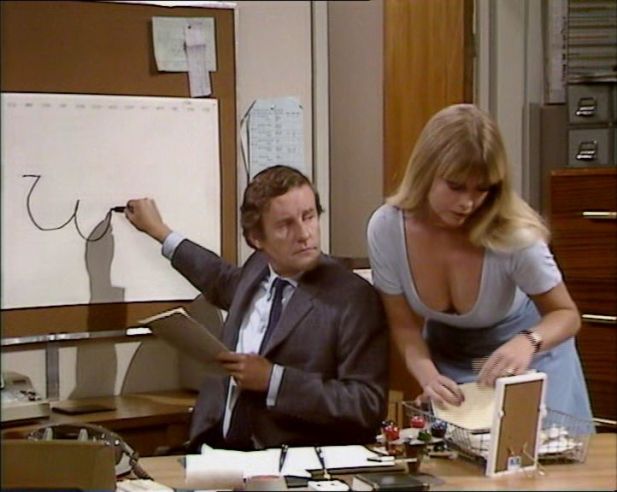 One major theme running throughout so much of British comedy during the 1970’s was that of sexual frustration. The Carry On’s, Benny Hill and Les Dawson’s Cosmo Smallpiece are just some examples of the typically frustrated British comedy male.  Richard Briers as Henry Fairlane in Swop You One Of These For One Of Those is someone who fits snugly into this niche as well.

The 1960’s may have been the decade of sexual revolution, but for some (and especially Henry) it seems to have totally passed them by.  He spends his time in the office ruminating on the clothes the secretaries wear.  “Shouldn’t be allowed to walk around the office dressed like that. They’re asking for it, they really are. Trouble is, they don’t ask me for it.”

He’s happily married, but his eye is certainly roving.  When one of the secretaries (Linda Hayden) wonders why he should bother to play around, he tells her that “I’m not old enough to turn it in.  I should be playing around, it’s natural.  I mean it keeps you young and healthy, it gives you a better disposition.”

Briers is perfect as a twitchy forty-something who’s desperately yearning for new horizons.  And as luck would have it, his colleague Roger Gresham (Henry McGee) has the answer – an invitation to a wife-swopping party.  You couldn’t really get any more 1970’s than that!  Henry’s keen, but Roger tells him that he has to make sure he brings his wife along – no wife, no entry.

Come the night of the party and Henry’s been separated from his wife – he lost her at Belsize Park tube station.  Roger refuses to let him in without her, so he has to keep a lonely vigil outside, watching enviously as numerous other couples gain admittance.  The frustration part is key to the comedy – Henry has to remain constantly unfulfilled,  otherwise the joke doesn’t work.

Eventually, Henry’s wife Linda (Jan Waters) does turn up – just after Henry stepped away from the door.  Roger’s delighted to see her and and instantly lets her in (after some hesitation she throws herself into the party with gusto).

So by the time the party’s over, Linda’s had a great time and poor Henry’s been stuck outside the whole time.  Henry, like so many comedy characters from this decade, is forced to constantly have his nose pressed to the glass, watching others enjoy themselves.

Richard Briers gives a very nice turn and Henry McGee (a familiar Benny Hill stooge) makes an impression as one of the oldest swingers in town.  It’s also good to briefly see the imposing figure of Peggy Ann Clifford.  She made a memorable non-speaking appearance in The Missing Page episode of Hancock’s Half Hour as the woman who watches Tony mime the plot of a particularly exciting book.

Swop You One Of These For One Of Those is a step up from Car Along The Pass and is, if nothing else, a good time-capsule of the period.