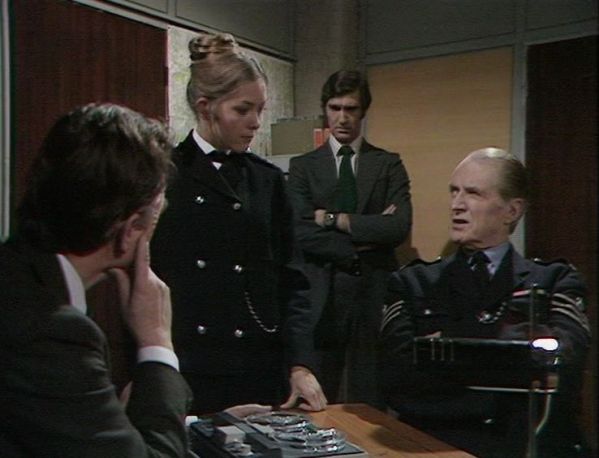 A few mysterious sounds of the end of the phone are enough to spark major activity at Dock Green nick.  The story opens with Anne Turner (Marion Lines) and her daughter Janey (Lyn Doyle) returning home.  “Home” at present appears to be a rather dingy flat in a very run-down area.  Anne notices the door is unlocked, which concerns her.  She sends Janey downstairs to play and calls Dock Green police station.

But after only a few words, WPC Hawkins (Jacqueline Stanbury) hears a choking noise as if she’s being strangled.  Dixon takes over the call and a few moments later Janey picks up the receiver, telling Dixon that her mother’s asleep.  Then either Janey replaces the receiver or somebody does it for her.  It’s little enough to go on, but Crawford, Brewer and Dixon put their heads together to try and work out what they can establish from the few sounds recorded from the call.

Sounds (the sixteenth episode of series twenty, originally broadcast on the 13th of April 1974) is very much an episode of two halves.  The first is concerned with the hunt for Anne and Janey and the second (which is the more dramatically interesting) details what happens once they’ve been found.

To begin with, they scour the tape for clues – they can hear the sound of machinery and also the hooter of a tug on the river.  Officers at Dock Green obviously have an affinity with the river, as Crawford’s able to ascertain that two hoots means the tug is turning to starboard.  He then asks for the name of every ship on the river that sounded its hooter at the time the call was made.  This should help to narrow down the search field.

An expert, Dave (David Wood), is called in to examine the tape.  He’s the antithesis of Dixon – since he sports long hair and colourful clothes – but since he’s an expert in his field, there’s grudging respect.  Dave is able to isolate the machinery noises much more clearly.  Neither Dave or Dixon can quite put their finger on what the machinery could be, but WPC Hawkins is able to smugly tell them that it’s a Heidelberg Superspeed Platen printing press.

This impressive feat of deduction is explained when she tells them that the recording could be heard in the station office and at at exactly the time it was being played, a stationary delivery was made and the printer’s apprentice recognised the sound!  This is a little difficult to believe, but it’s necessary in terms of moving the plot forward, as by now we’re half-way through the episode.

This information allows Crawford and Brewer to locate the flat, but there’s no sign of anybody and all personal belongings have been removed.  One clue is that there’s two telephone numbers – one is the Dock Green nick and the other is a local security firm.

Whilst the search for the missing woman and child has been interesting, we now enter the dramatic heart of the episode.  One of the guards from the security firm, Davis (Michael Graham Cox), pays Dixon a visit.  He’s keen to help – frankly he’s too keen and it’s clear right from the start that he has his own agenda.  It doesn’t take too long for the story to emerge.  Anne is his wife (at present she’s reverted to using her maiden name) and whilst their marriage has obviously been punctuated with bouts of domestic violence, he considers himself to be untouchable.  He knows that there’s no case without Anne’s testimony and he also knows that she’ll say that her present injuries are due to her slipping on one of Janey’s toys.

This is what she tells Dixon, but he obviously doesn’t believe it.  When he asks her if he’s beaten her up before she tells him that “it’s just between him and me, isn’t it? A private matter, nothing to do with the police.”  Dixon counters by telling her to “stop repeating everything he tells you. There’s no need to be afraid of him.”  But it’s clear that Anne won’t change her story.  Although she may be frightened of him, there’s also a sense that she genuinely loves him and believes that things will change.  The unspoken inference is that things won’t get better, but without Anne’s testimony, the police are powerless.

Davis is presented as a loathsome character – an arrogant man who’s sure he’s beyond the law’s reach.  And indeed he is – all Dixon can do is to tell him to leave the station before he gets thrown out.  It’s a small victory, but it’s all they have.

Sounds is a bleak little tale.  It gives us a glimpse inside an abusive marriage and we’re left to wonder what will happen in the future.  In his closing speech, Dixon hopes that Anne will someday pluck up the courage to make a statement (for Janey’s sake if for no one else’s) but that’s the only sliver of hope we’re left with.

This isn’t the first time that Dixon has touched upon the area of domestic abuse.  And due to the fragmentary nature of Dixon’s archive holdings, it’s difficult to know for sure when the series shifted from the viewpoint presented in the 1956 episode, Pound of Flesh.

There, Dixon observed that “if I arrested every bloke in Dock Green who clocked his wife, I’d be working overtime”.   Since Pound of Flesh is one of the rare episodes to exist from the early run, it’s hardly surprising that this quote and clip has been used on more than one occasion as a club to beat the series with.

It could be argued that Dixon’s comment was an accurate representation of the attitudes of mid fifties Britain.  In Sounds, which was made nearly twenty years later, it’s obvious that times have changed and spousal abuse is now taken more seriously.  But it’s still seen as a crime which is unlikely to result in a conviction, for the reasons that we’ve seen.

The lack of any positive solution might come a surprise to those who regard Dixon as a twee, predictable series – but as we’ve seen so far, the truth is somewhat different from the legend.