No police series could ever hope to avoid the thorny topic of corruption within the force, but it’s fair to say that it was always a difficult one for Dixon of Dock Green to face.  This is due to the overwhelmingly positive picture of the police force always painted by the series (which by the mid 1970’s made it clearly something of an anachronism).

Z Cars’ first episode (Four of a Kind, tx 2/1/62) showed us coppers who made bets on duty and would think nothing of giving their wife a black eye.  So for all of Dixon’s strengths, Z Cars (and other later series including The Sweeney) did tend to be streets ahead when it came to showing the police’s weaknesses as well as their strengths.

But Dixon did occasionally tackle police corruption.  The most famous example is The Rotten Apple (1956), largely because it’s one of only a handful of episodes from the 1950’s and 1960’s to survive.  And the fact that the bent copper was a very young Paul Eddington also helped to keep it in the public consciousness (via clips in documentaries, for example).

A more recent episode, Eye Witness, also had an interesting throwaway moment – when the villain told his henchmen that they’d be able to track down the witness currently held in police protection since they had a pipeline into most police stations up and down the country.  Nothing actually comes of this in story terms (the witness is found another way) but it’s an subtle acknowledgment that corruption was rife in the 1970’s.

N.J. Crisp’s Conspiracy (originally transmitted on the 10th of May 1975) is essentially a three-hander – shared between Dixon, Crawford and PC Len Warren (Andrew Burt).  Dixon receives an anonymous letter claiming that Warren was seen drinking with a criminal out on probation, Ben Randall (Jon Laurimore).  Warren is the chief prosecution witness in Randall’s upcoming case, which makes the allegations even more damaging.

Dixon regretfully tells Andy that ten years ago they could have simply thrown this letter in the bin, but now it has to be investigated.  Andy’s keen to call in A10 (the department created to investigate matters like this) but Dixon wants to keep it in-house for now (which causes friction between them).

Warren is portrayed as an ambitious man, keen for promotion.  His over-zealous nature and his strict adherence to the law means that he has few friends (either within or outside the force).  He’s a loner, who likes to bend the rules occasionally, and Dixon tells Andy that he sees much of the young PC Crawford in him (although Andy doesn’t take this as a compliment!).

Although the circumstantial evidence of Warren’s guilt is strong (and the story does throw in a few scenes that seem deliberately designed to show him in a bad light, which is something of a cheat) eventually it’s proved that he didn’t accept a bribe from Randall.  But he’s already decided to resign, since he found the investigations into his private affairs (such as questions about how he could afford to buy a new car) to be incredibly intrusive.  Dixon tells him that it’s part of the price he has to pay for being a police officer, but for Randall it’s clearly unacceptable.

Conspiracy was originally planned to be the final Dixon episode (another series was only given the go-ahead very late in the day).  When you know this, it’s easy to see how it was crafted in order to conclude the series.  For one thing, Dixon is much much centre-stage than normal (by this time he’s usually relegated to giving sage advice from behind the station desk).  There’s also several key speeches from Dixon which make specific points.  The first is directed at Andy.

I remember, a long time ago now, a young copper on the beat pressing hard to get into CID. I remember that same young copper as a detective constable, always convinced that he knew best. And later as a detective sergeant who wasn’t above ignoring the book when it suited him. You, Andy. You’ve crossed your fingers and taken a few shortcuts in your time. Mostly they worked out but sometimes they didn’t. Do you know why it took you so long to become a detective-inspector? You got the reputation for bending the rules. But you’re a good copper. And so is Warren.

The second occurs a few minutes later and is directed at Warren.  It’s a signature moment for Jack Warner and it’s very clear that he feels every word.  As the camera slowly closes in on Dixon’s face, Warner seems to be struggling to hold his emotions together – as presumably he believed this would be the last time he’d play the role.  It’s a beautifully delivered monologue.

All the years I’ve spent as a copper, I think every minute’s been worth it. Oh, the police force isn’t perfect. It can’t be. It’s manned by ordinary men. I know we talk about red tape and frustration when a villain goes free and the harm done by the occasional bent copper. But, for all the criticism, the police are there to protect the public, and that’s what we do. We curb violence. We do our best to deal with villains who want to prey on society. I’ve been proud to have been a part of that. Even a small part. It’s been my life for a long time now and I don’t regret any of it.

Dixon and Andy then exit the station as the camera tracks up to show the blue lamp above the door, which is followed by the end credits.  This is a subtle nod to the original film and had the series ended there then it would have been a very decent conclusion.

Instead, we’ve one more series to look forward to, although Conspiracy is still the end of an era as Peter Byrne decided not to return.  As a regular since the very first episode in 1955 (which was titled PC Crawford’s First Pinch) Crawford was as much a part of the fabric of the series as Dixon himself and his presence will certainly be missed. 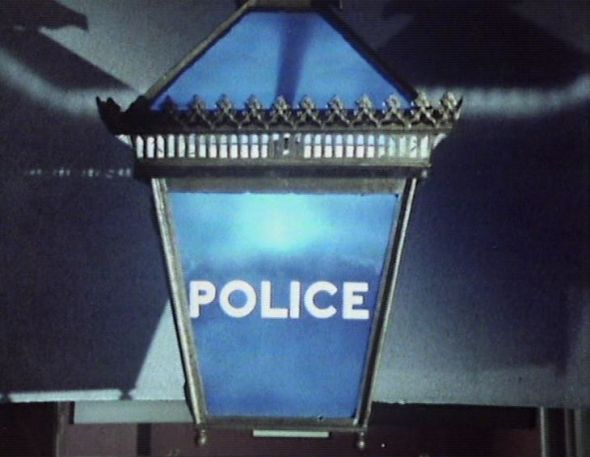