Skip to content
HomeReturn of the Saint – The Judas Game 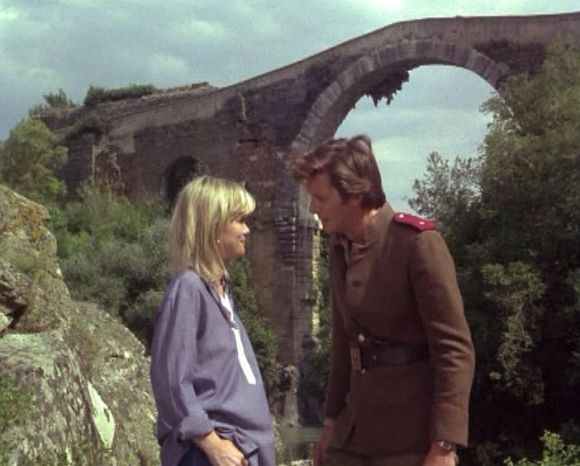 When I was a child, I was always disappointed that the animated stick-figure who appeared in the opening credits wasn’t the one who had the adventures (Ian Ogilvy was obviously a rather poor substitute!)  Time is a great healer though and I’m now reconciled to the fact that Ogilvy is the star of the show, rather than the stick-man.

ROTS was the last gasp for the ITC adventure series.  It follows their other 1970’s shows such as The Persuaders! and The Zoo Gang in having the luxury of foreign location shooting (something their 1960’s counterparts had to do without) and it’s easily the strongest series in this genre since The Persuaders!  Although it’s rather variable in quality (like many of the ITC series) at best it’s a cracking little show that’s still very enjoyable today.  I’m going to take a look at the early episodes and blog a brief, capsule review of each – as well as awarding them a mark out of five.

Simon Templar’s holiday in Italy is brought to an abrupt end, courtesy of MI6.  Led by Dame Edith (Mona Bruce), they want Simon to undertake a dangerous rescue mission.  They seem sure he’ll agree, since the kidnapped woman is an old flame of Simon’s – Sarah Morell (Judy Geeson).

Sarah has been kidnapped by a group of revolutionaries who wish to use her knowledge of counter-intelligence to train their terrorists to operate even more effectively.  Simon reluctantly agrees and with the aid of Vlora (Olga Karlatos) manage to infiltrate the heavily guarded fortress.  But a surprise awaits the Saint …..

The Judas Game has a slightly stodgy opening.  Rather obvious dubbing (a trait of many ITC series) is a little distracting in the early scenes (it’s very obvious with Mona Bruce, for example).  But once Simon snorkels his way to the island, things pick up – especially when he runs into the lovely Vlora.  Whist Judy Geeson might be the nominal female lead, Olga Karlatos has more screen time and she and Ian Ogilvy make a very effective team.  She’s remarkably easy on the eye too, especially when dressed in uniform!

If bad dubbing is always an intermittent problem with ITC series, then day-for-night filming is the other regular irritant.  It’s bizarre that even a series like ROTS, which enjoyed extensive overseas shooting, couldn’t afford to film at night.  Instead, a filter is placed over the camera to give the impression that it’s night-time, although the blazing sky is a dead-giveaway.  Alas, this rather saps the tension out of Simon and Vlora’s escape from the beach.

Happily, they infiltrate the fortress during the day-time and Simon is easily able to rescue Sarah.  Suspension of disbelief is required here – as he single-handedly has to make his way past numerous guards and then has to carry the unconscious Sarah back to Vlora and the van.  Why is Sarah unconscious?  When they meet, she tells him that she wasn’t kidnapped – she defected.

At this point, there’s an interesting edit.  We cut away from them and what appears to be a punch is heard.  When we cut back, Sarah is unconscious and the clear inference is that Simon’s knocked her out.  It’s a slightly clumsy edit, so it might be that after the scene was shot it was felt it wasn’t a good idea to show Simon hitting a woman (even though it’s obvious what’s happened).  I also love the way they make their escape, with Simon blowing up the fortress gate with a rocket launcher!  It’s pure James Bond.

Sarah and Vlora don’t get on, mainly because Vlora regards her as a traitor and wants to shoot her.  When the guards catch up with them, Simon seems to be of the same opinion.  “It’s quite simple Major, she’s insane. Now why don’t you just treat her as a mad dog and put a bullet through her head?”

There’s a further twist to the tale though (as well as the reveal that one of the MI6 agents is a traitor).  Overall, this is a strong episode and it’s easy to see why it was chosen as the first to air in the UK.  It’s got action, foreign filming and two attractive female co-stars for Ian Ogilvy to tangle with.  The bad-guys don’t make much of an impression, but all in all this rates four halos out of five.

2 thoughts on “Return of the Saint – The Judas Game”