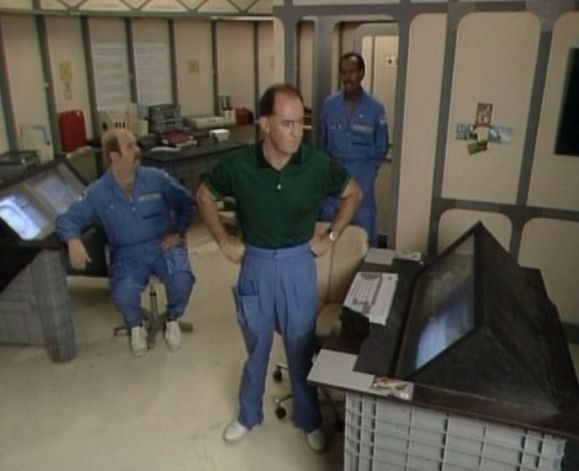 An aborted launch of a Santoni-Italia rocket triggers a radiation alert (Santoni-Italia have a contract to transport some of the Earth’s nuclear waste out into deep space).  Luckily there was no leak, but the question is, what went wrong?

By a strange coincidence, Krivenko had already asked the Star Cops to examine the workings of Santoni-Italia.  As Nathan is forced to return to Earth for seven days leave, Theroux and Devis pay a visit to Carlo Santanini (Michael Chesden).  They find him less than helpful and the enquiry isn’t helped by Theroux’s strange behavour – ever since the radiation scare he’s been deeply distracted.

En-route to Earth, Nathan decides to spend his holiday in Italy – thanks to a chance meeting on the Moon shuttle with Lina Margello (Vikki Chambers).  But once he arrives he’s attacked and almost killed by a disgruntled ex-Santoni-Italia employee and it’s only the start of his nightmare.  Drugs are planted on him and large sums of money are deposited into his account.  He’s clearly being set up – but why and by who?

This Case To Be Opened In A Million Years was the first episode of Star Cops not to be written by Chris Boucher.  Philip Martin had been commissioned to write two scripts, but the second (Death on the Moon) was never made due to industrial action.

This story is notable for the many and varied bad Italian accents and the rather clumsy plotting.  Last episode it was the Americans who were painted with a broad stereotypical brush, here it’s the Italians.  There’s some gloriously ripe fake Italian accents, but the best (or worst, depending on how forgiving you are) must surely be Carl Forgione’s tour guide.

As I’ve said, the plotting on this one is a little suspect.  Immediately after the launch accident Nathan is required to return to Earth, which does leave virtually no time for Santoni-Italia both to decide they need to discredit him and to work out a plan.  Lina is planted to subtly guide him to Italy, but what would have happened if he’d gone somewhere else for his holidays?  Presumably they would have pursued him, but it still seems an incredibly long-winded and inefficient way of doing things.  And just because they target Nathan, do they think that would stop the investigation?  Surely they realise he’s not the only Star Cop on the Moon?

Erick Ray Evans doesn’t have a particularly impressive episode as Martin’s script asks a lot of Theroux and sadly Erick Ray Evans’ limitations are rather exposed.  Linda Newton and Trevor Cooper are much more solid though.  With Nathan on leave, Devis basically acts as Theroux’s deputy and Cooper’s comic timing is certainly in evidence.

Time seems to have passed since the events of the last episode as Nathan has lost the antagonism he felt towards Kenzy.  This thawing of relations is reciprocated by Kenzy, who obviously feels comfortable enough to tease him (telling him at one point that Aunty Pal knows all about relationships!)  This is quite a change from the barely concealed dislike they both had for each other in Trivial Games and Paranoid Pursuits.

There’s no particularly familiar faces amongst the small guest cast, but for me the most notable appearance was from Stewart Guidotti.  For those with a love of pre-Doctor Who British science fiction, he’s best remembered as Geoffrey Wedgwood from the Pathfinders trilogy of the late 1950’s/early 1960’s (a clear influence on the early days of Doctor Who).  But I have to admit that without spotting his name in the credits I’d never have twigged, since by 1987 he was definitely no longer the fresh-faced lad from Pathfinders!

This Case To Be Opened In A Million Years is watchable enough, but outside of the interaction of the regulars it’s pretty undistinguished stuff.