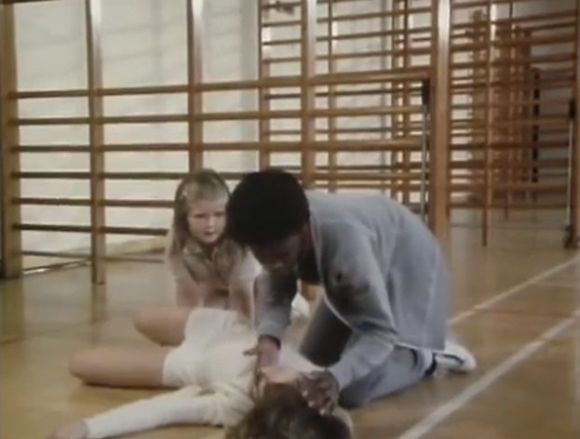 This episode is the first indication that the theft of Duane’s bike wasn’t an isolated incident.  David Mitchell (Michael Mannion) proudly shows the others his new bike.  It’s not actually brand-new – it was bought second-hand from a local bike shop – but it does look as good as new.

Duane is initially impressed, although he’s perturbed when he spots a familiar looking dent.  The early evidence would indicate that the shop is receiving the stolen bikes, respraying and customising them, then selling them on.  It seems rather foolish to sell the stolen bikes in the same area (and indeed this is a point made by the shop owner in the next episode – concerned that the bikes he’s receiving are local) but if they had been sent further afield then the plot couldn’t have been wrapped up so quickly.

It turns out that Madelin Tanner is involved, helping the thieves to steal the bikes.  Although quite why they need her help isn’t clear, since all the bikes are parked in the bike shed and are ripe for the picking – even the ones with chains.

This is quite a busy episode, as apart from setting in motion the bike plot (which will be concluded in the next episode) we’re also introduced to Chris (Jonathan Warren) , the editor of the school magazine.  He’s chairing a meeting with Mr Curtis who although he’s keen to stress that the school magazine is very much the pupil’s responsibility, still wants to see everything due for publication before the magazine is sent to the printers.

Naturally this doesn’t go down very well and cries of censorship are heard.  It’s interesting that the school magazine appears to have been going for a while and was originally set up by the pupils with no staff interference or involvement.  Quite how this happened is a bit of a mystery (presumably it can be explained as one of Mr Llewellyn’s more progressive policies) but now the staff are keen to ensure that no embarrassing material makes it into the public domain.  We’ll come back to this story-line later in the series.

Lastly, Sally is taken ill during Miss Peterson’s gym class and rumours (spread by the irresponsible Anita) state that she’s dead.  It’s been threaded through the early episodes that Sally hasn’t been well, so her fall from the gym bars doesn’t come as a complete surprise.  Just prior to her accident, the soundtrack switches to an ominous heartbeat – it’s a familiar dramatic device, but even though it’s a bit of a cliche it still works well.

The question is, was Miss Peterson responsible?  We’ve already seen that she pushes the girls hard – she doesn’t accept any excuses for non-participation in games (telling them that she expects them to still join in even if they have a broken leg!).  This doesn’t please the games-shy Anita (Joanne Boakes) who mutters that she’ll tell her Gran about this (which seems to be her stock response to almost everything).

Happily, Sally turns out to be fine and we find out in the next episode that she has a weak heart which meant that an attack could have happened at any time and therefore Miss Peterson wasn’t to blame.  And now that her plot-line is concluded, Sally vanishes, never to be seen again.  Not an uncommon occurrence in Grange Hill (think of Simon Shaw from series two).

We also get our first look at Jill Harcourt (Alex Kingston) although she’s very much in the background here and won’t emerge into prominence until later in the series, when she starts menacing Susi to complete her homework.