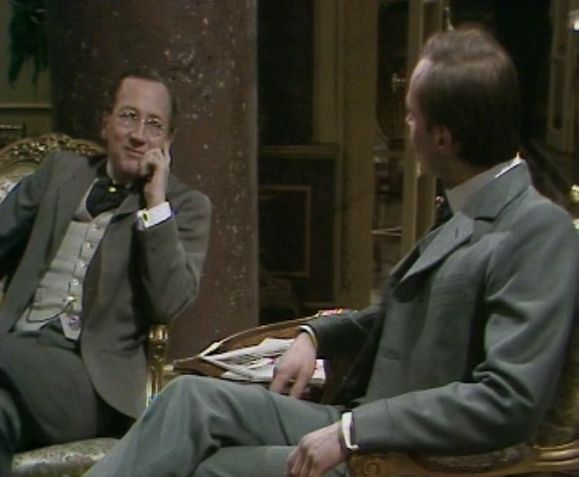 Bernard Hepton as Mr J.T. Laxworthy in The Secret of the Magnifique by E. Phillips Oppenheim
Adapted by Gerald Kelsey. Directed by Derek Bennett

Sydney Wing (Christopher Neame) and Anderson (Neil McCarthy) have both recently been released from prison, but that’s where the similarity ends.  Wing has the sort of casual, upper-class air which ensures he can easily mix with the highest in the land whilst Anderson hails from a much lower rung of society.

But whilst they’re very different people, both are selected by the mysterious Mr Laxworthy (Bernard Hepton).  Laxworthy has a proposition – he wants Wing to pose as a rich man-about-town whilst Anderson takes the role of his valet.  And since both Wing and Anderson are penniless they readily agree (especially when Laxworthy tells them there’s a fortune to be made).

The three later travel to the South of France, where the French warship Magnifique lies in port.  It possesses an innovate new torpedo and Laxworthy sees an opportunity to make a great deal of money …

Edward Phillips Oppenheim was a highly prolific author, penning more than a hundred novels between 1887 and 1941 as well as numerous short story collections.  Dubbed “the prince of storytellers” he was a pioneer of the spy-fiction genre – although like many of the authors featured in The Rivals he slipped into obscurity following his death.  The Secret of the Magnifique was one of a number of short stories collected in the volume Mr Laxworthy’s Adventures, which was published in 1913.  It can be read here.

Bernard Hepton is a great, albeit rather underrated, British actor.  His fairly low profile, despite his impressive list of credits, may be partly due to the type of characters he usually plays.  They don’t tend to be flamboyant or demonstrative – Hepton specialises in self-contained, internal performances.  So he’s never going to be an actor that commands the screen, he’s much more subtle than that.

The 1970’s were something of a golden period for him.  He took the lead in two WW2 series produced by Gerard Glaister – Colditz, in which he played the Kommandant and Secret Army, which saw him switch sides to take the role of Albert Foriet, a member of the Belgian underground network “Lifeline” (which was dedicated to returning Allied airman to the UK).  Other notable series, such as I Claudius and Tinker, Tailor, Soldier, Spy were also graced by his presence and there were numerous one-off appearances, such as this one.

Our first sight of Hepton is as the cabby who picks up both Wing and Anderson.  Had there not be a caption-card at the start, proclaiming Hepton as the star of the episode, then this slight misdirection might have worked a bit better.  As it is, when Laxworthy takes off his cabby’s overcoat and removes a fake moustache it doesn’t really come as any sort of surprise.  But it does give us an early indication that he’s a man who likes to be in control and also enjoys manipulating people.

Christopher Neame had also starred in Colditz (and would appear in the first series of Secret Army too).  His trademark charm is on display here, making it obvious why Laxworthy selected him.  Neil McCarthy is present for a spot of comic relief – Anderson is a rough, gruff sort of chap who’s inclined to blurt out the wrong thing at the wrong time.

The Secret of the Magnifique offers something of a change in pace for The Rivals, as there’s no detective (Laxworthy loosely fulfills this role though).  But whilst Mr Laxworthy might not be an honest man he’s not a totally dishonourable one either.  He makes a handsome profit from the secret of the Magnifique’s torpedo, but it’s maybe not in the way one might have expected.

Elsewhere in the cast, the likes of Gary Watson and John Nettleton adopt French accents of varying accuracy whilst Canadian-born Bruce Boa plays an American, Freeling Poignton.  Boa was one of a handful of Canadian actors resident in the UK during this time (Shane Rimmer was another) and this small band of ex-pat Canadians were able to earn a very good living by playing Americans.  And at least their accents always sounded convincing!

The Secret of the Magnifique is one of those episodes that leaves you wanting more.  Hepton, Neame and McCarthy make an entertaining team and a run of further adventures would have been very welcome.  As mentioned previously, it’s strange that The Rivals was never used as a series of pilot programmes since a few episodes, including this one, could have spawned their own series.   Unfortunately it wasn’t to be.