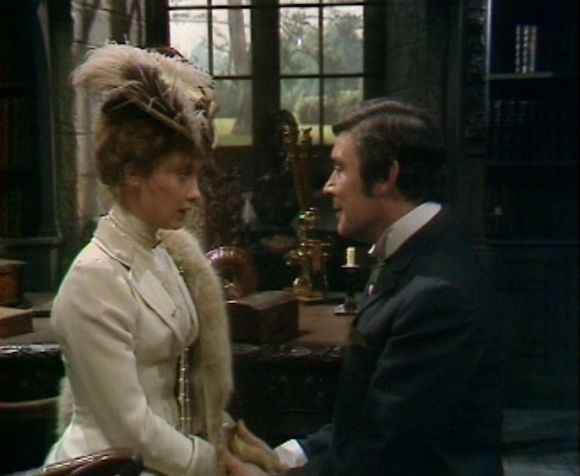 Ronald Lewis as Dagobert Trostler in The Anonymous Letters by Balduin Groller
Adapted by Anthony Steven. Directed by Dennis Vance

Vienna, 1900.  Countess Nadja (Nicola Pagett) has received several anonymous letters of a most intimate nature.  Nadja is anxious that not a breath of scandal reaches the ear of her husband, Archduke Othmar (Michael Aldridge) and therefore consults Dagobert Trostler (Ronald Lewis),  Dagobert is a confidant of the noblest of Viennese society and therefore the ideal man for the investigation.

The Anonymous Letters was written by Adalbert Goldscheider, under the pseudonym of Balduin Groller.  Groller created Dagobert Trostler in 1890 and like so many other writers of the era he sought to create a detective somewhat in the mould of Sherlock Holmes, albeit one who was resident in Vienna.  But Dagobert is quite different from Holmes.  The London detective had little time for polite society and was never impressed by rank or title, whereas it’s clear that Dagobert relishes his influential friends and would be loath to lose them.

If I had to describe this episode in one word then “florid” seems apt.  Possibly this is due to the translation from German to English, which means there’s a somewhat melodramatic unreality to the story.  This might be why none of the main characters ever quite seem to come into sharp focus.  Dagobert is amusing enough, but his deductions are fairly routine and his affair with Countess Tildi Leys (Carolyn Jones) doesn’t quite convince.

Nicola Pagett had already appeared in Upstairs Downstairs, so the role of a pampered member of the upper-classes clearly wasn’t too much of a stretch.  And despite the difference in nationality there’s more than a touch of Elizabeth Bellamy in Nadja, but whilst Upstairs Downstairs gave us the chance, over time, to appreciate Elizabeth’s vulnerable side, we don’t have the same luxury here.  So although Nadja is completely blameless it’s hard to invest a great deal of interest in her fate.

Michael Aldridge sports an impressive beard (like much of the facial hair in the series it was clearly stuck on) and is also responsible for an unintentionally amusing moment after he storms into Dagobert’s rooms and accuses him of taking advantage of his wife.  After slapping his face, he then challenges Dagobert to a duel, but the younger man responds by knocking him out!  His servant then rushes in and mournfully tells him that he’s hit a Habsburg – which was clearly deemed to be a sufficiently dramatic point to lead into the second advert break.

Although The Anonymous Letters has the usual excellent cast, the lack of characters that can be identified with does mean that it’s difficult to fully engage with the story.  Certainly one of the lesser adaptations from series two.