Jenny Stewart (Fiona Curzon) is concerned about her father Charlie (Sam Kydd), so she turns to the Saint for help.  Charlie has been having disagreements with his business partner Ray Dennis (John Woodvine).  The two of them built up a thriving building firm but Charlie is convinced that Dennis has conned him out of a substantial sum of money.

Dennis is a highly amoral figure and after a brief fight with Charlie he has no compunction in leaving him in a building scheduled for demolition.  And when Charlie’s lifeless body is recovered from the rubble Simon vows to exact the maximum amount of revenge on Dennis.  So he puts his plan into action – an elaborate con involving transporting Tower Bridge to America ……

Written by the creator of Minder, Leon Griffiths, Tower Bridge is Falling Down was his sole contribution to the series.  It’s basically Hustle, thirty years early, and it sees Simon posing as Sir Malcom Street, a top government official.  In order to hook Dennis effectively, first Simon contrives to lose ten thousand pounds to him at a rigged poker game.

And when the man he believes to be Sir Malcolm proves unable to settle his debt Dennis is slowly reeled into the con.  This involves his company being awarded the contract to demolish Tower Bridge (provided he can sweeten the deal by paying Sir Malcolm off).

All the familiar tricks from a normal episode of Hustle are present and correct.  For example, Sir Malcolm is a real person and the Saint brazenly takes over his office in order to meet with Dennis.  And as so often happens, the real Sir Malcolm returns just as the Saint is leaving (the two pass each other in the corridor).  Dennis is easy to con because, as seen in Hustle every week, he’s a greedy man.  Had he been honest then he wouldn’t have fallen for Simon’s ploy, but he sees the chance to make a quick and illegal profit and jumps at it.

It’s a pity that Leon Griffiths didn’t contribute any further scripts (although he would have been busy at the time setting up Minder).  John Woodvine is excellent as Ray Dennis.  Dennis’ lack of morality is clear right from the pre-credits sequence when he casually disposes of Charlie Stewart and although he isn’t the most complex of characters, Woodvine still manages to dominate proceedings whenever he’s on the screen.  A chilling moment occurs when he threatens to permanently disfigure Jenny if she doesn’t reveal Simon’s whereabouts.  It’s obvious from the parameters of the series that this is a threat which won’t be carried out, but Woodvine is intense enough to make you believe for just a few seconds that it might.

Alfie Bass, as Sammy, has a nice role as a con-man who works with Simon to rope Dennis in (he’s the sort of character that could easily have cropped up in Minder or indeed Hustle).  And although Simon’s involvement is down to Jenny, for once this is a very male-dominated episode and she only takes a minor role in proceedings.

It”s a pity that the con doesn’t play out to the end, since Dennis learns about Simon’s true identity.  This means there’s a more traditional conclusion (a punch up) followed by Ray Dennis’ arrest for murder.  Whether his confession about Charlie’s murder (secretly taped by Simon) would actually have stood up in court is a moot point, so it would have been more dramatically satisfying for him to have been conned.

Even allowing for this, thanks to John Woodvine and the unusual plot, Tower Bridge is Falling Down rates four halos out of five. 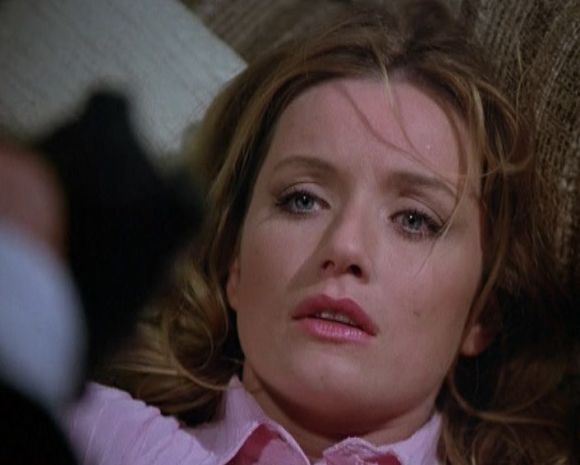