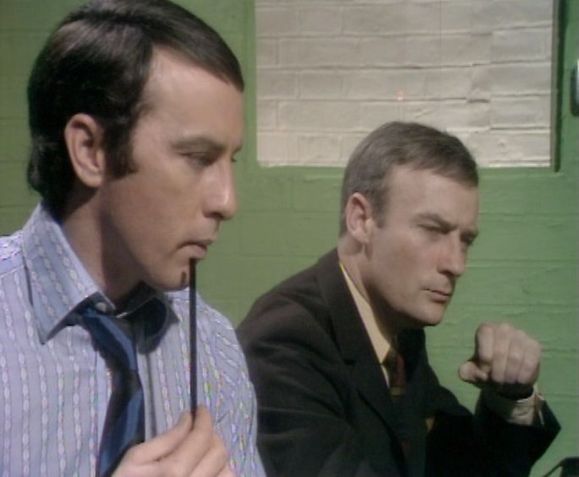 The Carrier opens with Callan and Lonely indulging in a spot of breaking and entering.  This was something they did on a regular basis during the first three series, but this episode marks the first time they’ve indulged during series four.

What’s very noticeable about this section of the story (which lasts for the first fifteen minutes) is that neither of them speaks a word.  It’s reasonable enough that they would want to keep noise to a minimum, but the complete lack of dialogue was presumably Peter Hill’s choice.  And it does help to make what would otherwise be a fairly routine sequence slightly more interesting.

Lonely’s cab is parked right outside and this will lead to both of them getting arrested.  As they continue to work inside the house, outside we see a policeman take an interest in the parked cab.  Bizarrely, he’s able to open the door (did neither of them think to lock it?) and he then proceeds to spend the next few minutes walking around it.

It’s not entirely clear why the cab should be of such interest.  Did no cab driver ever park their vehicle outside their house?  If this was such an usual sight on a London street in the early 1970’s then it probably would have been wiser for Callan to have used an unmarked car, rather than something so distinctive as a black cab.

As Callan and Lonely work on, we cut back to the Section where Hunter explains to Meres (and the viewers) exactly what’s going on.  The house belongs to Professor Rose (Peter Copley), a notable scientist who intends to hand over the plans of a new radar network to the Russians.  The Professor is a familiar character-type from television drama of this era – the misguided scientist.  He’s not selling secrets for personal gain, he simply wants to ensure that all sides have access to the same knowledge.  This doesn’t cut any ice with Callan who later tells him that “you’re not even a real traitor are you? You’re just a woolly headed do-gooder trying to play god.”

Everything seems to go off fine – Callan photographs the documents that the Professor is intending to hand over to his contact (who he believes is a Dutch bookseller called Amstell, but is actually a KGB hitman called Tamaresh) and returns to the Section.  But Lonely takes a fancy to a small trophy in the Professor’s study and steals it.  When the Professor returns home the next day he notices that it’s missing and calls the police.

This is a part of the plot which stretches credibility a little.  It might have been possible to believe that the series one Lonely would have been so foolish, but it’s less credible that the series four Lonely would have done so.  And as the police have a record of the cab parked outside the Professor’s house they put two and two together and pick up Lonely and Callan.

Callan and Lonely aren’t in police custody for long though, as they’re bailed out by Detective Superintendent Brown (Windsor Davies) of Special Branch.  This disgusts Detective Inspector Vanstone (Michael Turner), the officer in charge of investigating the break-in.  Vanstone might accept that people like Callan are necessary to defend the security of the realm, but it’s the sort of person he is (an ex-con) which seems to upset him.

Hunter’s far from pleased that he had to ask Special Branch to release Callan and Lonely.  This then develops into the major theme of the remainder of the episode – the uneasy relationship between the Section and Special Branch.  Both organisations operate in similar areas, which often means that their interests overlap – but neither Hunter or Brown would dream of pooling information with the other.  This, as we’ll see, will have tragic consequences.

Special Branch also have an interest in Tamaresh (Ralph Nossek).  Two officers, Mary (Jean Rogers) and Allan (Roy Herrick) are assigned to tail him, but it’s clear that neither know who he really is.  We see Callan and Meres monitoring their radio transmissions as they follow Tamaresh to Epping Forest and both Section men know that the officers are going to their deaths.  They could have warned them, but since they shouldn’t have been monitoring their radio in the first place it’s not surprising that they didn’t.

Tamaresh quickly kills Allan (who followed him into the wood) and then emerges to find Mary.  Whilst he killed Allan without speaking, he’s slightly more sadistic with Mary – he tells her that her partner’s dead and lets the news of that sink in before he kills her as well.

When Callan realises that Special Branch had no idea who they were trailing, he launches an angry tirade against Hunter.  Hunter’s unmoved though – the Section doesn’t share information with other departments and that’s an end to it.

It’s an attitude which Callan finds hard to take – at least when he goes up against men like Tamaresh he knows what to expect, but the two unarmed police officers (who Callan says were little more than kids) never had a chance.  Hunter orders Callan to kill Tamaresh (which he naturally does) and the Professor is brought in.  Nothing will happen to him, but he’ll have to live the rest of his life knowing that nobody will ever trust him again.

Peter Hill’s only script for Callan is a decent effort, although several parts of the story (Lonely’s cab and his light-fingered pilfering) do detract a little. It’s possibly no surprise that the police feature strongly in this episode since Hill had worked for the Metropolitan Police for thirteen years, ending up as a Detective Inspector in the Murder Squad.  He left the police in 1969 to pursue a writing career and by this time had already contributed to several popular series, such as Public Eye, Armchair Theatre and Special Branch.

Since there was no real need for Callan and Lonely to be arrested, it might have been better to remove those scenes from the script (it wouldn’t have affected the later conflict with Special Branch).  But it does give us another one of those wonderful scenes where Callan browbeats Lonely.  When Lonely calls round to see him, Callan is unblocking the sink (another thing you never see James Bond doing) and he proceeds to berate Lonely whilst waving a sink plunger in his face!