Skip to content
HomeReturn of the Saint – The Obono Affair 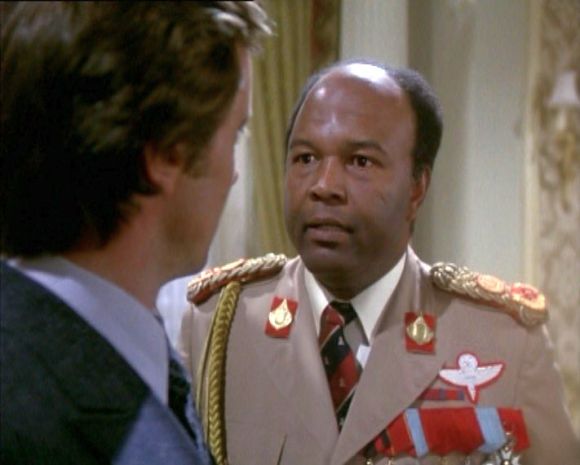 President Obono (Thomas Baptiste) is the universally loathed leader of a minor African nation.  His visit to Britain has generated death threats and Simon is on hand to prevent one such attempted assassination.  Although the Saint receives Obono’s thanks he makes it quite clear that he was simply in the right place at the right time and has no desire to associate with him any further.

But when Obono’s son Joey (Paul Medford) is kidnapped, the President turns to Simon for help.  The Saint is initially reluctant, but eventually teams up with the President’s right hand man Colonel Dyson (Jack Hedley) to track the kidnappers down …..

President Obono is a pretty thinly-drawn caricature of Idi Amin, who at the time was the President of Uganda.  His fondness for outlandish military uniform (with plenty of medals) and an appalling record of human rights are just two similarities.  No attempt is made to present Obono as a likable or reasonable character and early on we see him berate his double (the man designed to draw the assassins bullet).   He tells Simon that “men like Jopo enjoy brutalisation. They know no other way of life.”

Simon’s distaste for the man is made plain from their initial meeting and his loathing also extends to Colonel Dyson.  Dyson is as much of a cliche as Obono is – a former British soldier who’s accepted blood money to train Obono’s army (we’re told that the army is the one of the main reasons why the country is broke).  Hedley, a veteran character actor probably best known for playing Colonel Preston in Colditz, is suitably solid and is easily one of the best things about the episode.

Thomas Baptiste’s performance is a little odd at times – it’s somewhat non-naturalistic.  I’m assuming this was intentional, an attempt to give Obono a larger-than-life persona.  Baptiste is rather better towards the end, once it’s known that the President is dying of natural causes.

Although there’s some decent actors cast at the kidnappers (including Derek Newark and Robert Gillespie) they act in a rather inept way, which means that there’s no particular threat from them.  Although Rose (Marie Lawrence) who we see looking after Joey does have an interesting backstory.  She was one of Obono’s former mistresses and still mourns the death of her child (presumably killed on Obono’s orders).

The first of two scripts by Michael Pertwee (The Diplomat’s Daughter was the other) there’s nothing subtle about The Obono Affair but it’s agreeable enough.  It has to be said though that the closing scene, where Simon persuades Obono to pardon all political prisoners in his country, feels uncomfortably pat.  One of the reasons why series like ROTS had trouble dealing with complex, real world issues was because there’s no easy solutions to difficult problems – and this scene demonstrates it.  Will everybody live happily ever after?  Probably not and it would have been better to acknowledge that.

Three and a half halos out of five for this one.