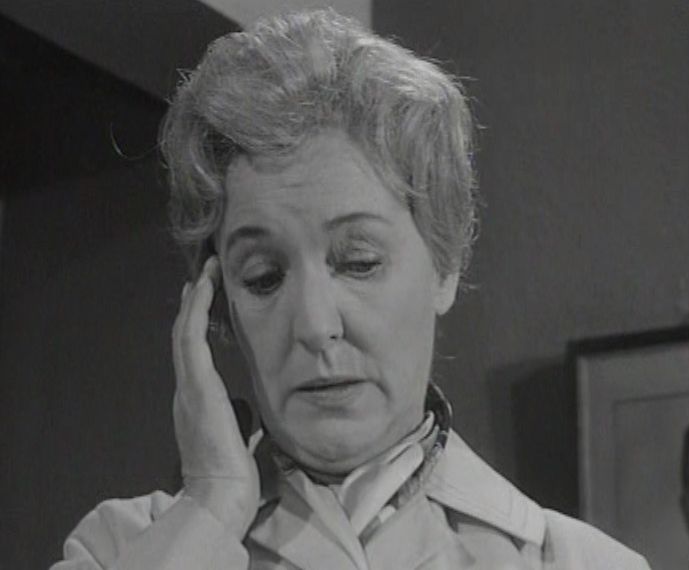 When electrician Ralph Maricut (Harry Fowler) pops over to Mr Henderson’s house to do some work he gets the shock of his life – he finds Henderson’s dead body in the bath.  The news seems to hit Henderson’s housekeeper Martha Smallwood (Kay Walsh) hard, but as we’ll see, appearances can be deceptive.

At first it seems like a simple heart attack, but a few unexplained bruises are enough for Det. Supt. Warr (John Dearth) to investigate further.  The police take an interest in Maricut, especially when they learn he’s got form for breaking and entering.  But it’s the perfect housekeeper Mrs Smallwood who’s the villain of the piece.   Aided by a number of disguises and aliases she preys on vulnerable older men – and now she’s disposed of Henderson she’s got her hooks into Percy Whitehead (Oliver Johnson).  He’s blind and lives by himself, so he appears to be ripe for the picking ……

Kay Walsh had been a notable face of British cinema, thanks to appearances in a series of classic pictures.  She starred in three films directed by David Lean (Walsh married Lean in 1940, they divorced in 1947).  The pick of these was probably Oliver Twist in which she played Nancy.  Later key credits include Stage Fright (1950, directed by Alfred Hitchcock) and Tunes of Glory (1960, directed by Ronald Neame).

She’s excellent as the housekeeper who makes a habit of killing off her charges.  Mrs Smallwood’s relationship with Whitehead is central to the episode – he trusts her completely, although the audience is privy to the numerous evil thoughts that flit across her face.  And the final few moments (when she reveals her true colours) are riveting – and a fine showcase for her.

Apart from Walsh’s villainous turn, there’s plenty to enjoy in this one.  We see the police identikit officer in action and although it’s a primitive way of doing things it does work very effectively.  There’s also the lovely moment when lothario David Keen passes on a sliver of his knowledge and experience concerning women to Gideon’s son Matthew.  His advice?  Play hard to get.  Matthew takes his advice, but needless to say doesn’t quite get the result he expected!

Harry Fowler, like Walsh, had enjoyed some substantial British film credits (including Ealing classics like Went the Day Well? and Hue and Cry).  Although Maricut was completely innocent, since he had a record it was obvious that the police would give him the once over.  Whilst Keen’s questioning wasn’t at all combative, at the end of the episode (when Gideon learns that Maricut has returned to breaking and entering) he does stop to wonder whether they were partly to blame for driving him back to crime.  A rare moment of introspection for Gideon.

It’s also nice to see John Dearth, albeit in a fairly small role.  He would later play a memorable villain in the Doctor Who story Planet of the Spiders and earlier in his career had been a hard-working utility player on the Richard Greene series The Adventures of Robin Hood.  Dearth appeared in numerous episodes, playing a different character each time, although occasionally he’d go one better and play two different characters in the same episode!