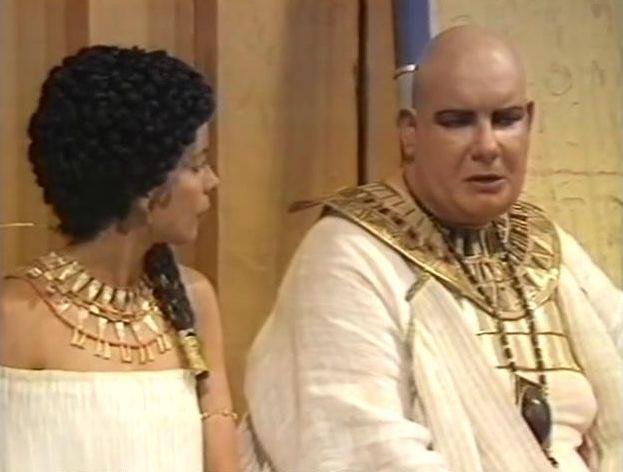 The Cleopatras, written by Philip Mackie and directed by John Frankau, is a series that delights in its own artifice.  At a time (1983) when British television was slowly moving towards film as the dominant medium for drama, The Cleopatras was an all videotape production which used every available video effect to create a unique atmosphere.

The series makes its intentions clear in the first few minutes – various picture dissolves and wipes (which are also used throughout the eight episodes) instantly tell us that this isn’t a run-of-the-mill production.  The sets at times appear more impressionistic than realistic and doses of CSO help to heighten the unreality.

All this helps to place the series firmly in the camp of electronic theatre rather than the naturalistic world of filmic drama (such as Tinker, Tailor, Soldier, Spy) which was increasing in popularity at this time.  Serials like I, Claudius had shown that videotaped historical drama could be compelling, but The Cleopatras – although it had a similar mix of power-struggles, incest and murder – never had the same impact.

Looking at it today, you have to be able to embrace the production (or at least to tolerate it) and ignore some of the riper overacting.  If you can do that then it’s possible to derive a considerable amount of enjoyment from all eight episodes.  And if not, you can at least admire their ambition.  Today, many dramas look pretty much identical, but for better or worse you could never say that about The Cleopatras.

Philip Mackie had previously penned a six part series called The Caesars (Granada, 1968) and it’s possible to regard The Cleopatras as something of a companion piece (both were studio-bound productions, although The Caesars didn’t indulge in trippy camera effects).

Although Mackie’s name isn’t that well known today (even amongst the select band of archive television enthusiasts) there’s plenty of interest to be found in his cv.  The Naked Civil Servant is one of his most high-profile screenplays, whilst I’d strongly recommend An Englishman’s Castle, a taut three-parter starring Kenneth More, set in a Britain where the Germans had, thirty years earlier, won WW2.

The premise of The Cleopatras is simple.  Theodotus (Graham Crowden) is instructing the latest Cleopatra (Michelle Newell) about the history of her family.  He tells her (and us of course) that the kings of Egypt, who are all called Ptolemy, almost always marry Queens called Cleopatra. The latest Cleopatra will ascend to the throne when her father dies and she marries her brother. Otherwise how will the royal blood line be kept pure? But before that happens Theodotus takes some time (the first five episodes in fact) to tell her the histories of some of her famous predecessors.

We travel back to 145 BC for the first of these history lessons. It opens with Cleopatra’s mother (played by Elizabeth Shepherd – doomed to be known as the actress who was Emma Peel for a very short while) who’s emoting in a most peculiar fashion. She tells her daughter (Michelle Newell, who plays all the Cleopatras) that her father is dead. We briefly see his death scene, but it’s presented in the characteristically abstract way that’s a feature of the series.

Eupator (Gary Carp) is in line for the throne, but Pot Belly (Richard Griffiths) is chosen ahead of him by Cleopatra’s mother. “He’s revolting. He’s so fat and horrible” says Cleopatra in disbelief. Griffiths is great fun and a highlight of these early episodes.

Eupator doesn’t last long (a mercy since Carp’s very shrill). He’s murdered in his bed in a scene that’s just as artificial as the rest of the series. We don’t see his murderers, but we hear one of them, although the voice sounds like it’s been dubbed on. Why this would be I don’t know, but it creates a strange sense of disconnection.

This continues when Theodotus pops up to explain the current state of the plot. Graham Crowden appears in a small box which then increases to fill the size of the screen. Once he’s imparted a vital nugget of information the box then shrinks before vanishing.

Cleopatra’s clearly power-hungry. She attempts to resist Pot Belly’s attentions, but ends up being raped by him. It might be expected that she’d treat him with contempt afterwards, but that’s not the case. When she tells him she’s pregnant it’s plain she’s delighted as it gives her a chance to move closer to the throne.

Cleopatra manages to easily dislodge her mother and proves to be an ideal helpmate for Pot Belly. This is demonstrated when they both attempt to bribe a visiting Roman official called Scipio Africanus (Geoffrey Whitehead). Pot Belly offers him gold (which is refused) and then a selection of topless serving girls (there’s an awful lot of bare breasts in this series, maybe one reason why it achieved a certain notoriety). When Scipio declines them, Pot Belly desperately wonders if he’d fancy boys instead! A nice comic moment from Griffiths.

4 thoughts on “The Cleopatras – Episode One”