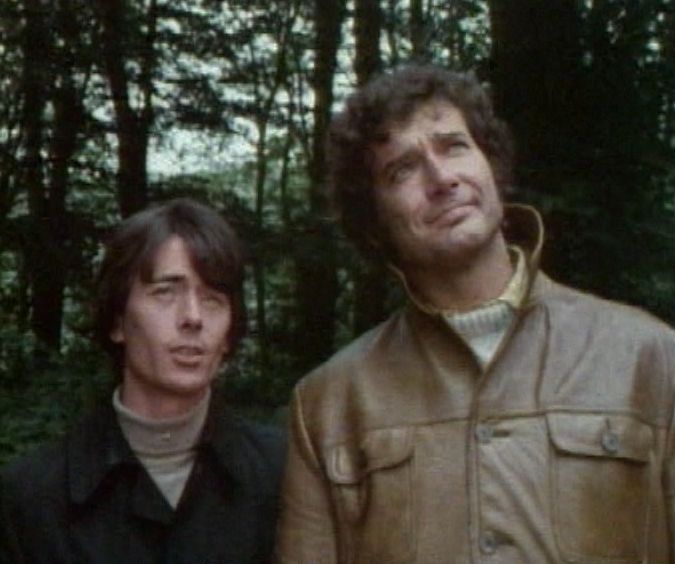 Ridge and Geoff Hardcastle (who now seems to have become a member of the Doomwatch team) are in the Yorkshire Dales, testing the nitrate levels in the local water, which is reported to be higher than average.

They’ve hired two young potholers, Reggie and Dave, to go down into the cave system and obtain the samples they need.  But when they don’t return, a major search is launched.  A map of the caves suggests they might have surfaced close to Wensdale Grange, a country house which has been in government hands since WW2.  The building is surrounded by an electrified fence and patrolled by armed soldiers, which instantly piques Ridge’s interest.

They’re able to get inside for a brief meeting with Major Sims (Geoffrey Palmer) but he’s unwilling to explain exactly what goes on there.  So it’s no surprise that Ridge decides to return later and break in.

Ridge’s attempt at a clandestine entry didn’t get him very far, but he’s not held captive for long.  After he’s released, he tells Geoff that he was stripped and sprayed with disinfectant and then goes on to explain that nothing is happening at the house now.  “But they did do something once, something that went bad on them. And it’s still in there. Waiting to get out.”

The mystery is soon revealed – the house was the location for germ warfare experiments.  Although all research was concluded five years ago the house remains totally off-limits and will remain so for decades.  Although Duncan, the Minister’s secretary, tells Quist that the bug was developed purely for defence purposes, Quist treats this statement with an ironic retort.  Exactly what’s defensive about a bug that can wipe out a city like London within six weeks?  Germ warfare appalls Quist, not only the research itself but also that it leaves an area “where no one can live for the next half century because of a wartime government experiment. Do they have any idea in the Dales what they have in their midst?”

The way the story will develop seems pretty clear. Major Sims is adamant that there’s no danger – nobody ever goes into the house and if any animals ever break into the grounds they’re shot (which explains the armed soldiers) and examined straightaway.  Quist makes it clear that it’ll only take one slip – an infected animal, contaminated water – to bring down a catastrophe on everyone.  And when Reggie and Dave turn up, seemingly none the worse for wear, it doesn’t take long before it’s established they were at the Grange and are now carriers.

It goes without saying that the fact Reggie and Dave were able to enter the Grange, pinch some antique pistols and leave again without anybody noticing doesn’t reflect very well on Major Sims.  Geoffrey Palmer is characteristically excellent as Sims, arrogant and superior.  It’s only a shame that he doesn’t feature more and we never really see his reaction to the news that his security measures have been well and truly breached.

Invasion has a major location shoot, which has (presumably) the locals acting as extras.  Because there’s so many people milling about at the end it does help to create the sense of scale that the story demands.  Quist has bad news for the villagers – although they’ve been inoculated and should be fine, they have to leave the village.  When the landlord of the local pub asks when they’ll be able to return, Quist doesn’t answer – an unspoken confirmation that it won’t be within any of their lifetimes.

After the buses pull away there’s a brief moment of silence, which is broken when a number of army vehicles pull up to the village square.  The soldiers, wearing protective gear, get to work – spraying the houses and shooting any animals they find.  There’s an eerie juxtaposition at work here – the faceless armed soldiers and the English village – which creates a powerful, unsettling image.  And the final shot of the episode – a Ministry of Defence sign reading “Extreme Danger Keep Out” – provides the episode with a stark conclusion.