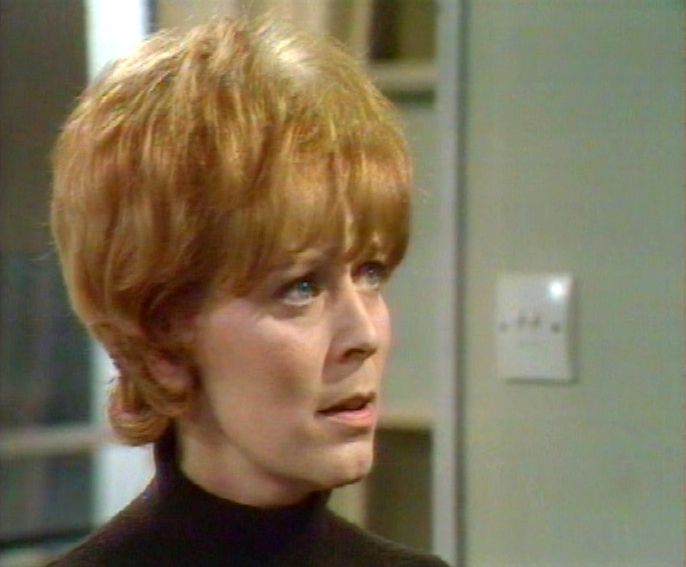 Doomwatch have been asked to investigate the Amblethorpe project.  The brainchild of Sir Billy Langly (Kevin Brennan) it aims to solve the problem of population overcrowding.   Langly paints a nightmarish vision of the future to Quist.  “By the year 2000 there’ll be over eighty million people living in this country. They’ll want cars and places to park them. They’ll want clothing and feeding and educating and work to do, to say nothing of housing…”

Langly’s solution is to build more and more high rise flats.  With a booming population, he sees no other solution – but concerns have been raised about the dehumanising effect such places have on their occupants.  Fay has been assigned to do research at a typical block of flats – the Langly estate – living and working there for an extended period.  There certainly seems to be a malaise affecting some of the people and Fay herself also begins to crumble under the pressure …..

The Human Time Bomb has a social, rather than a scientific, problem to deal with.  Although tower blocks were still a fairly modern concept at the time, it’s plain from the tone of Louis Marks’ script that their inherent dangers were already clearly understood.  We open with the unfortunate Mr Hetherington (Talfryn Thomas).  As he joins his neighbours waiting for the lift, he gives them a cheery greeting – only to receive blank contempt from them.  As the lift descends, his anxiety at being jammed in like a sardine begins to tell.  Once he gets outside he rushes straight into the path of an oncoming car – still observed with dispassion by his neighbours.

When it’s later revealed that Hetherington worked for the planning office, it’s possible to wonder whether Langly is targeting people who might be a threat to him.  Fay has begun to receive crank calls and also has to deal with innuendo and abuse from some of her neighbours, whilst another member of the planning team, Scobie (Roddy McMillan) also has a breakdown.  This turns out not to be the case though as it simply all seems to be a coincidence, which is slightly hard to swallow.

The Human Time Bomb is an excellent vehicle for Jean Trend.  Fay, seemingly by the nature of the work she’s doing at the Langly estate, becomes isolated and paranoid.  This is demonstrated best when she asks the odd-job man Donovan (Ray Armstrong) to come to her flat to repair her lights.  He does so, but Fay interprets his attitude as hostile and attempts to attack him with a hammer.  Armstrong cleverly plays the scene in a fairly neutral way, so although his line about her promise to make his visit worth his while could be taken several ways, it does seem that Fay jumped to the wrong conclusion.

Quist is fairly dense throughout.  He seems to regard Fay’s concerns as the ravings of an unbalanced woman (surprising, since he’s supposed to consider her a first class scientist) and it’s only at the eleventh hour that he realises she could well be right and rushes back to her flat – just in time to save her from attacking Donovan.  Earlier, he failed to acknowledge that she saved him from being attacked by a young boy with a hammer – which confirms that by not living in the Langly estate like Fay he’s been unable to pick up on the atmosphere of fear and alienation.

If the vision of urban, inner-city life we see here isn’t terribly oppressive in a visual way (later productions would do it much better – in The Human Time Bomb everything still seems a little too neat and tidy) then Louis Marks’ script still manages to pile on the misery.  There’s few moments of light relief – even Ridge doesn’t really crack any decent gags – so the overall impression is quite relentless, which I presume was the tone Marks was aiming for.

The main flaw with the story is that it’s debatable just how much the tower block environment is responsible for the behaviour we see. Quist is convinced – but there’s little of the rigorous, methodical research he usually champions to back this up (instead, his conclusions seem to be derived more from hunches and guesswork). Fay’s bouts of hysteria do give Jean Trend something decent to work with, but it also has the unfortunate side effect of making her character seem rather neurotic.

So whilst this isn’t the strongest that series two has to offer, thanks to placing Fay front and centre it’s certainly of interest.