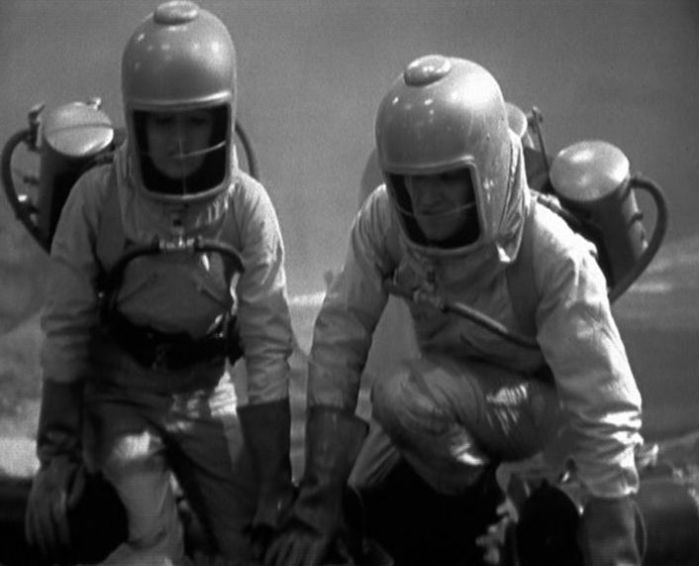 Given that Pathfinders to Mars must have had a pretty limited budget, the Martian landscape is an impressive set.  With dry ice providing an eerie mist it looks pretty convincing to these eyes and on the lower definition televisions of the 1960’s no doubt would have looked better still.

Margaret and Geoffrey are given the honour of being the first humans to set foot on Mars, but Henderson doesn’t want them to go any further and orders them to stay in the rocket, monitoring the radio.  Margaret’s very disappointed, but Henderson tells her that they haven’t come here to explore – all they want is to find sufficient water for the journey home.

This presumably means that they have enough fuel for the six week return journey.  Considering that the rocket was only supposed to make a trip to the Moon and back (which wouldn’t have taken more than a week) it seems remarkable they were stocked up with three months fuel.

Margaret and Geoffrey observe a large cloud of dust heading towards them at enormous speed.  Stewart Guidotti has the unenviable task of delivering the line “look at Hamlet – he’s frightened”.  Cut to a shot of a guinea pig pottering about, quite unconcerned.  But if Hamlet doesn’t look bothered then both Guidotti and Cameron are teetering on the edge of hysteria as Geoffrey and Margaret wonder if Brown was right all along.  Are the Martians coming to them?!  Short answer, no.

Henderson continues to kiss Mary.  He’s getting closer to her lips, as this one lands on her cheek.  The pair of them, along with Brown, are slowly reconnoitring the surface, looking for water.  Brown is keen to head off by himself to investigate the canals, but Henderson tells him that they’re here for one reason only – to find water – and Brown, grudgingly, agrees.  This is another moment that’s later echoed in Doctor Who – in The Daleks, the Doctor is keen to explore the city, but Ian refuses.

Henderson, Mary and Brown are caught up in the dust storm.  After it passes, Brown is missing.  Henderson decides he must have fallen down a crevice and although he’s regretful about the older man’s fate, he tells Mary that they can’t do anything to help him, so it’s best to press on and try to find the water they need.

Of course, Brown isn’t dead – instead he turns up at the rocket to tell Geoffrey and Margaret that Henderson and Mary are the ones who fell down the crevice.  They don’t believe a word of it though, with young Mary earnestly stating that “I don’t believe they’re dead, I won’t.”  Brown wants the pair of them to join him in his exploration of the planet.  Margaret immediately smells a rat – if they go and Henderson and Mary return, then they wouldn’t be able to take off (as she astutely observes, Brown’s attempting to use them as hostages).  But alas, she eventually agrees to go with Geoffrey (who’s much more keen) and the three of them set off.

A healthy downpour of rain sees Henderson and Mary menaced by aggressive Martian plant-life.  And that’s not a sentence you tend to type every day.  It’s an ambitious sequence which is, thankfully, brief – had it lasted any longer it would have quickly lost its credibility.

So apart from plants, is there any other life on the planet?  We’ve yet to meet Brown’s Martians, but the cliffhanger teases us that we’re getting closer.  He climbs a hill, looks over and returns to tell Margaret and Geoffrey that he has found life, although it’s not what he was expecting ….. 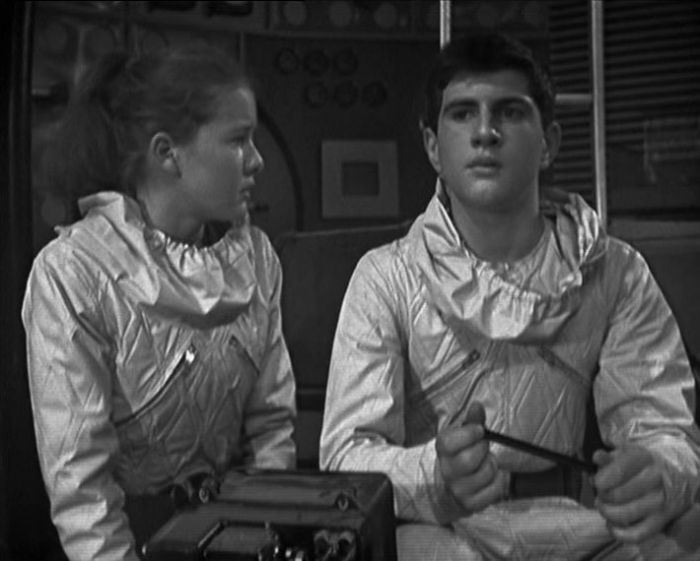