Skip to content
HomeRobin of Sherwood – The Witch of Elsdon 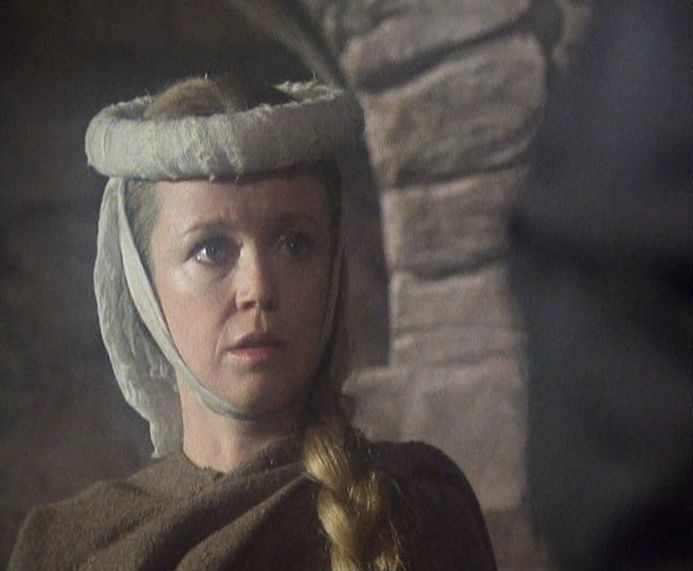 Thanks to Gisburne’s faked evidence, Jennet of Elsdon (Angharad Rees) is convicted of witchcraft.  She and her husband, Thomas (Cornellius Garrett), are due to be hanged in three days time.  But then the Sheriff offers both of them a pardon, provided Jennet uses her skills with herbs to incapacitate Robin and the rest of the Merry Men …..

The Witch of Elsdon opens with a double prophecy – two for the price of one, you might say.  Robin later correctly interprets the first part (the location of the Sheriff’s taxes) but sadly isn’t able to work out who might be poisoning their drink (although it’s probably obvious to most of the audience).  Bit of a waste of time Herne bothering to tip him the nod then.

The use of prophecies has to be done carefully – it’s a handy storytelling shortcut but can also turn into a magic wand to explain away plotholes.  However it does work quite well here, as it gives Robin foreknowledge which isn’t shared by the others.  He knows that a cart will be passing somewhere through the forest, apparently carrying nothing but sacks of grain, whereas it’s actually brimming over with tax money.

Although the theme isn’t really developed, there then follows a faint air of tension amongst the Merries (especially Tuck) as they can’t understand why Robin seems to be heading off on a totally arbitrary course.  That he decides not to tell them he’s acting on something he learnt about in a dream might be significant.  Does he fear they wouldn’t believe him, or is he simply being aloof – as maybe a good leader should?

This adventure with the tax man marks the start of tension between Robin and Marion.  Robin wants Marion to stay behind – he tells her she may get hurt  – something which Marion doesn’t take at all well.

Later, there’s a nice scene where Judi Trott wordlessly observes the drunken, belching Merries who are crowing about how they abused the unfortunate tax-collector, Gregory (David Goodland).  Marion doesn’t say anything – but then she doesn’t have to as her expression speaks volumes.  She loves Robin, but maybe now seems to be wondering exactly what she’s let herself in for.

Nickolas Grace continues to be a source of great amusement and entertainment.  Sheriff Robert de Rainault is well served by this script, with the following moments being particularly memorable.

Angharad Rees, a familiar television face in the late seventies thanks to Poldark, is nicely vulnerable as Jennet.  That Jennet’s conflicted about what she has to do is obvious, but her husband’s fate is paramount to her.  It’s just a pity that she catches the eye of Will, who becomes instantly smitten with her.  Will, by far the most emotionally damaged of the Merries, doesn’t take her betrayal at all well – even if the others (especially Marion) find it easier to understand and forgive.  Cue several scenes of Ray Winstone looking especially downcast.

If the basic plot is quite straightforward, then it’s the character building moments (Robin and Marion, Robin and the Sheriff, etc) which make this a rewarding episode to rewatch.  The weather gods obviously smiled on the filming again, as the forest scenes are bathed in sunshine.  There’s plenty of fighting and Robert Addie gets dunked under the water numerous times.  So what’s not to like?