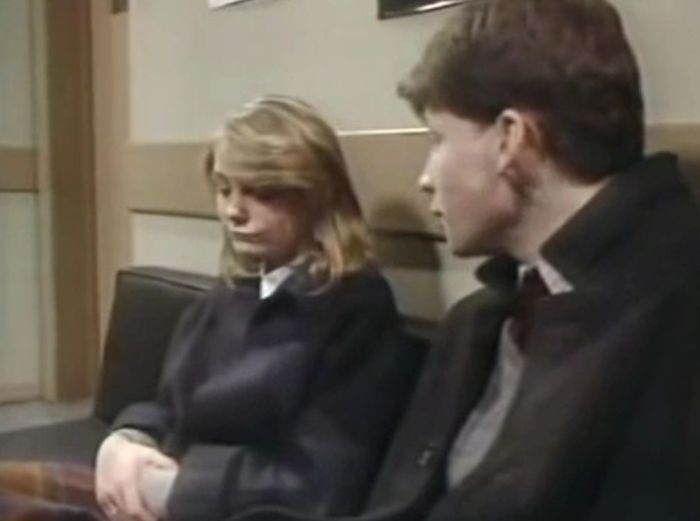 There’s something a little odd going at the start of this episode.  Fay is agonising over how to tell Julian that she no longer wants to go out with him, but since they’ve never had that sort of relationship this doesn’t make any sense.  Julian’s got other things on his mind though – his beloved dog, Bumper, is nearing the end of his life, but Julian remains in denial, convinced that he’s going to get better.

Banksie’s latest plan for some quality time with Jackie involves taking his brother’s stock car for a spin, with Jean-Paul and Sarah tagging along.  Banksie might tell the others that his brother, Phil (John Blundell) is totally fine with this, but it doesn’t take a genius to work out that when Phil does make an appearance he’s going to be less than impressed.

Blundell (who had previously appeared in both the tv version and film of Scum) is menacing as Phil, probably because he doesn’t get angry.  His self-control, mildly telling his younger brother that it might be a good idea to flag down the car (Jean-Paul driving, Sarah sitting beside him) sooner rather than later, carries with it a certain chill as we can sense the inherent threat of violence behind his calm words.  This is put into action when he starts to give Banksie a few slaps and Jackie backs away in fear.

The next day Banksie turns up to school with a battered face, courtesy of his brother.  As with the familial beatings issued to pupils during the first few series, this isn’t dwelled upon – except in an obliquely approving way.  Since Banksie was in the wrong he deserved such a beating (which is certainly Zammo’s conclusion).

As for Jean-Paul and Sarah, he might have been a good driver but his luck finally runs out and he turns the car over (a nicely mounted stunt).  He walks away without a scratch but Sarah is hospitalised with a broken arm and facial bruising.  Sarah’s last moment in the episode – which also turned out to be Joanne Bell’s final scene in Grange Hill – is a powerful one, as she silently turns her ravaged face away from Jean-Paul who, finally shocked into a semblance of responsibility (or possibly he’s simply worried about the reception he’ll receive back home from his strict parents) visits her in hospital.

With Mr Humphries mysteriously absent once again, it falls to Mrs McClusky to host the parents meeting with Mr Wright, Mrs Wilks and Mrs Banks.  Mrs Banks was obviously played by a non-speaking extra though, so has nothing to say!  Mrs Wilks is much more voluble, although Mrs McClusky isn’t inclined to agree with her view that Sarah was totally innocent, so Jackie, Banksie and Sarah are all suspended indefinitely.

With Mrs McClusky now effectively back as the head, it does make you wonder why they decided to demote her to deputy if they weren’t going to follow through with any decent storylines on this topic.  It wasn’t the first and won’t be the last time that the head is an off-screen character, but at least here it’s not long until the matter is resolved.

With Banksie and Jackie suspended, that leaves an opening in the school play and Fay and Julian are drafted in at short notice.  It means they’ll have to work closely together, but now that the exciting, but reckless, Jean-Paul has returned to France, Fay regards the steady and reliable Julian more warmly.

Although since Julian doesn’t return in 1986, we’re not too far away from Fay’s next – and most catastrophic – choice of boyfriend …..