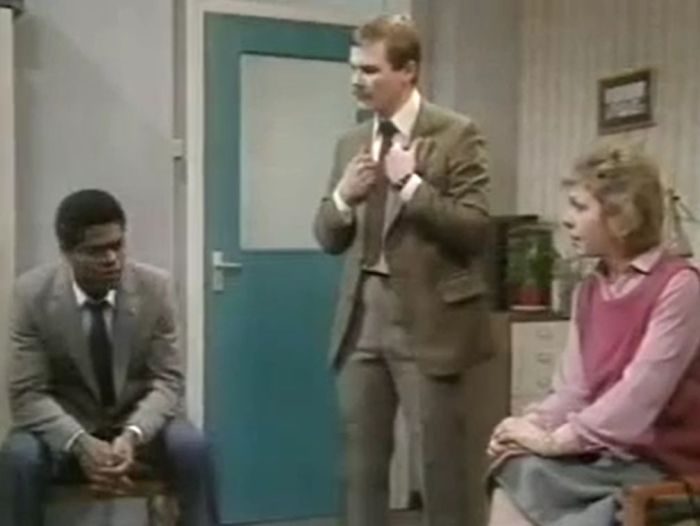 It’s time to bid a fond farewell to the French exchange students.  But Roland doesn’t seem to be too upset that he’s going to be parted from Fabienne, which no doubt has something to do with the fact that he’s decided to stow away with them on the return trip to France ….

Like the pelican crossing protests in the previous episode, this is another story beat that comes to us cold.  We’ve seen that Roland and Fabienne have been close, but since the ground for his misadventure hasn’t been laid at all, it comes across as a rather half-hearted escapade.  But it does give us our only chance this year to see Mike Savage as Mr Browning who, as ever, gives us his best hangdog expression when he learns the news, courtesy of the ever-zealous Janet (poor Mr Browning has had more than his fair share of strife with Roland over the years).

The cross-channel ferry crossing was done on the cheap – a quick bit of stock footage and then a cut to what is supposed to be a rough crossing (plenty of camera moves and overlaid mist).  Not terribly convincing, but then for such a short sequence it’s hardly surprising that they had to quickly cobble something together.

For those keeping up with the Zammo/Jackie relationship, it’s off again.  We never actually see Jackie (or Banksie) in this episode, but Julian breaks the bad news to Zammo that they’ve been seen together.  I have to admit that this eternal triangle is starting to wear a little thin with me, thankfully series nine shakes things up, as  Zammo spends the year otherwise engaged ….

Ronnie cleans Mr Bronson’s wig after Gonch asks her nicely.  Poor Mr Bronson has had to resort to wearing his emergency hair-piece, which causes a certain amount of merriment (even Mrs McClusky isn’t immune).  The question still remains about how they can return it though.

One of the longest running threads of series eight is finally brought to a conclusion as the identity of the thieves is discovered – Emma Stebson, her brother Gripper and Denny Rees.  Okay, let’s just stop for a moment and consider this – Gripper and Denny (both of whom would be recognisable to many of the pupils and staff) have apparently been wandering around the school corridors during the daytime for weeks on end, carrying out armfuls of swag.  Really?

It’s even more remarkable that we don’t even see them – we just hear their voices on Gonch’s Walkman.  At last his staffroom bugging came up trumps, it’s just a pity (for him) that Mrs McClusky, Mr McCartney and Mr Smart learn about it.  Mrs McClusky asks him, dangerously sweetly, if listening to the staff’s tittle tattle is very interesting.  Whenever Mrs McClusky is particularly pleasant you know there’s danger.  I also like the way that Mr Smart launches into full judicial mode when interrogating Gonch – grasping his lapels like he was at the Old Bailey.

With the robberies wrapped up, that just leaves the school play to sort out.  Everything seems to be going swimmingly, until it’s discovered that all the sets have been slashed.  Was this the work of Gripper or did someone else with a grudge against the school do the deed?