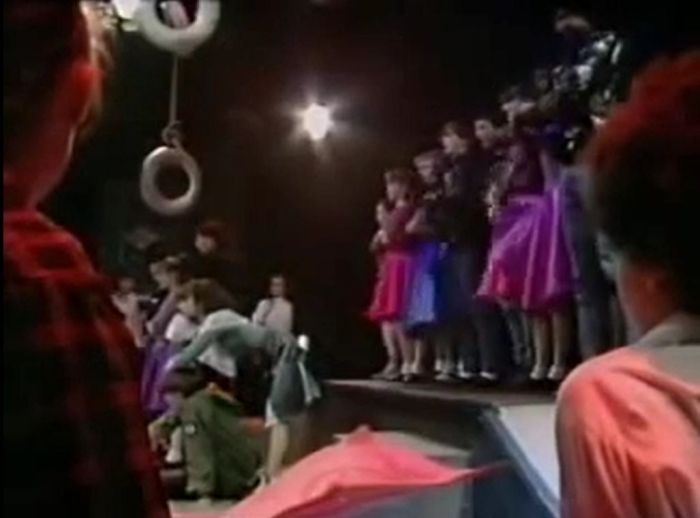 The opening night of the school musical – Brighton Rock – is nearly here, but discord is still rife.  The lack of decent sets remains an issue, although Zammo is more concerned about the absence of any bikes, bitterly reflecting that they’re going to be the only Mods and Rockers who ever had to walk to Brighton.

Something certainly seems to be lacking and help comes from a most unexpected quarter – namely Mr Bronson.  After a year terrorising most of the pupils (and some of the staff!) he demonstrates his more approachable side after he corrals Vince into extracting sound effects from the film Death Race 2000.  Mr Bronson hopes that this will help to spice things up, although Mr Smart is less convinced.

Those with long memories will remember Gonch’s wheeze of copying tapes from the video shop owned by Vince’s dad (that explains how Mr Bronson discovered the tape of Death Race 2000 on the media resources machine).  Michael Sheard is on fine form as Mr Bronson informs Gonch that his old eyes get a little tired towards the end of term, but they’ll be undimmed at the start of the next.

It’s a pity that this new, briefly human, Mr Bronson doesn’t achieve rapprochement with Zammo.  After spending the year riling the boy, this part of the plot just fades away (next year Mr Bronson will have a new unfortunate – Ant Jones – to victimise and his contact with Zammo will be minimal).

Mr Baxter, standing in for the ever-absent headmaster, and Mrs McClusky are sandwiched either side of the Mayor, who regards the unfolding first night entertainment with a long suffering air.  Everybody seems convinced that something’s missing in the performance, although quite what is hard to say.

Banksie, after smashing up the sets, makes amends by persuading his brother Phil and some of his mates to bring their bikes into the auditorium.  When Mrs McClusky hears of this she’s not at all sure it’s a good idea (understandably) but Mr Bronson once again is on the side of the pupils.  Is this because he’s remembering his own salad days?  He seems to confess as much to Mr Smart at one point, although imagining Mr Bronson as either a Mod or a Rocker is something of a stretch ….

The bikes make an appearance, although since all they do is drive onto the stage and park up, you have to wonder whether it was worth all that effort.  The play comes to a decent conclusion thanks not to the bikes but because the final song is suitably stirring.  It claims that strife between warring groups can be settled if only everyone could learn to love one another.  It’s a nice, albeit hopelessly optimistic, sentiment and ties in neatly to the running theme of Grange Hill vs Brookdale vs Rodney Bennett.  Zammo and Jackie of course have been attempting to bridge this gap all year, although with limited success.

Whilst the 1985 Christmas Special touches on several topics (Roland’s lost love, the struggle between Cally’s real and adoptive mothers) developed during series eight, it was made as part of the production block for series nine, so series eight ends here.

Various characters – Jimmy Flynn, Julian Fairbrother, Annette Firman, Mandy Firth – all bow out with no ceremony.  Annette is at least mentioned at the start of the next series, the others join the list of the Grange Hill forgotten – pupils who simply disappear and are never referred to again.

Ben Rea’s sole year as producer introduced a host of characters who would have long term futures with the series and although at times the plotlines seemed not to be terribly well developed (frequently dropped or picked up again with little ceremony) it’s still an agreeable run of episodes.